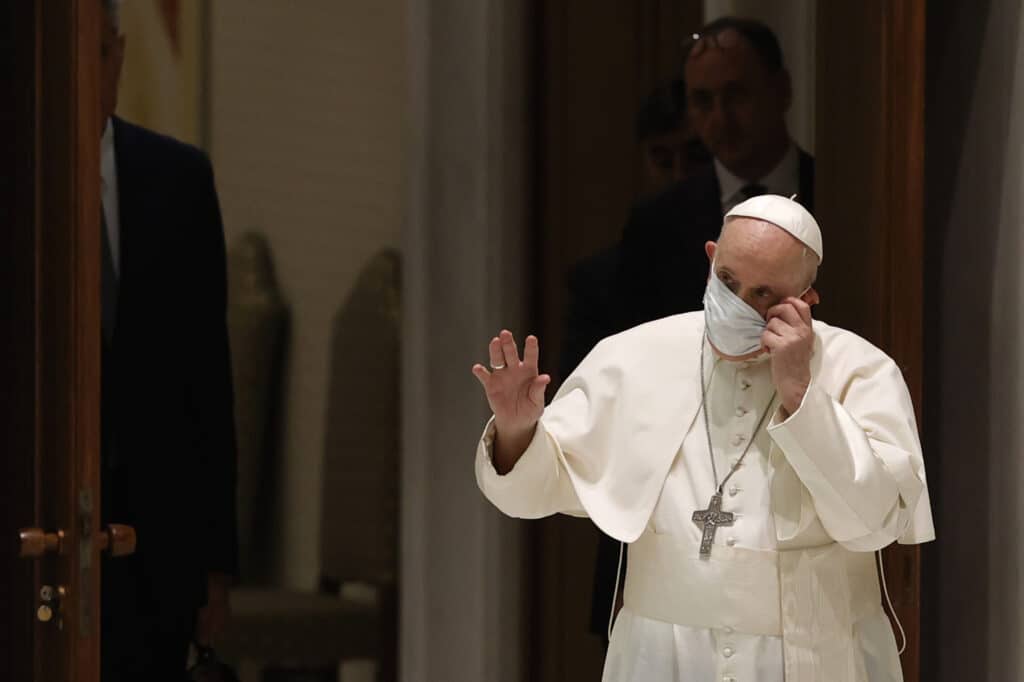 After seating himself on stage, The Pontiff removed his face mask, smiled, and waved at the visitors who flocked to see him. Several hundred pilgrims and tourists wore face masks as part of the Vatican’s anti-pandemic measures for crowd situations. The associated Press has the story:

VATICAN CITY (AP) — Pope Francis resumed his routine of holding weekly audiences with the general public a month after he underwent bowel surgery, and during the much-awaited appearance Wednesday he recalled the anniversary of the devastating Beirut port explosion and expressed the desire to visit Lebanon.

After removing his face mask to protect against COVID-19, Francis walked unaided to the center of the stage of a Vatican auditorium. He smiled as he gestured toward the visitors, before taking his seat in an upholstered chair and addressing several hundred pilgrims and tourists, who wore masks as part of the Vatican’s anti-pandemic measures for crowd situations.

Near the end of an almost hour-long audience, Francis spoke of the Beirut explosion, recalling the “victims, their families, the injured, and all those who lost homes and work” in the blast.

Lebanon’s people, he said, were still “tired and disappointed” in the aftermath, a reference to the economic and political crises convulsing the Middle Eastern nation on the Mediterranean Sea. Francis appealed to the international community to offer “concrete gestures” of help to the Lebanese people and not “just words.”

“My desire to visit you is great,” Francis said, adding he “never tires of praying” for them.

Francis, 84, was hospitalized on July 4 in Rome for an operation in which a section of his colon was removed. The Vatican said the surgery was necessitated by diverticular stenosis, or a narrowing of the bowel.

On Wednesday, audience members clapped vigorously after he finished his introductory remarks and after he greeted each language group. After the pope gave participants his closing blessing, he went down the stage’s steps with the help of two aides to greet some members of the public, pausing for a selfie with an audience member.

“I hope that the coming summer holidays will be a time of refreshment and spiritual renewal for you and your families,” Francis said during his scripted remarks.

Unlike previous pontiffs, who spent summers at the Vatican’s holiday retreat in the cooler hills near Rome, or, in the case of John Paul II, who liked to vacation in the Italian Alps, Francis stays at the Vatican each summer.

But during his papacy, the Wednesday audiences have been suspended in July to give Francis some extra rest time during Rome’s hot summers. His hospitalization therefore didn’t interfere with his regular general audience schedule.

While recovering at the hospital, Francis stepped onto a 10-floor balcony to greet well-wishers. He still looks somewhat wan, but Francis has been in good spirits and adlibbed at times during his traditional Sunday window appearances to the crowd in St. Peter’s Square.

His wish for a peaceful future for Lebanon echoed sentiments he voiced three days before his surgery. On July 1, at a prayer service in St. Peter’s Basilica, Francis insisted that Lebanon must remain a “land of tolerance and pluralism” as he welcomed the country’s Christian patriarchs to the Vatican to pray for an end to that country’s crises.