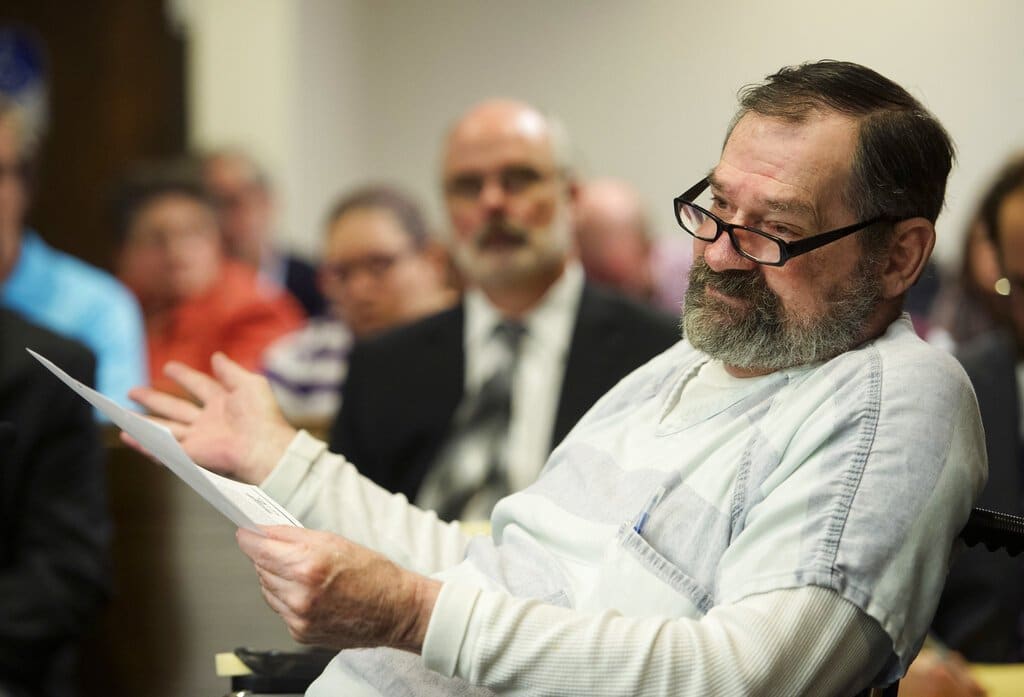 Frazier Glenn Miller Jr., a white supremacist who shot three people to death at Jewish centers in Kansas City, has appealed his death sentence to the Kansas Supreme Court. His attorneys say he should have not been allowed to represent himself. The Associated Press has the story:

Attorneys for Frazier Glenn Miller Jr. appeal his death sentence on grounds he was not competent to represent himself

LIBERTY, Mo. (AP) — An avowed anti-Semite who shot three people to death at two suburban Kansas City Jewish sites in 2014 is asking the Kansas Supreme Court to overturn his death sentence, saying he should not have been allowed him to represent himself at trial.

The appeal from Frazier Glenn Miller Jr. is scheduled to go before the state Supreme Court on Monday. He was convicted of one count of capital murder, three counts of attempted murder, and assault and weapons charges in August 2015.

Miller’s attorneys argue that the Johnson County Court judge who oversaw his trial should not have allowed him to represent himself. They say the judge did not consider whether Miller had mental health issues that would make him incompetent to represent himself in a complex capital case.

Miller, from Aurora, Missouri, also argues that the judge should have allowed him to present mitigating evidence during the penalty phase, and that the death penalty itself is unconstitutional.

Miller, who is also known as Frazier Glenn Close, testified during trial that he drove to the Kansas City area in April 2014 to kill Jewsbefore he died. He said at the time that he didn’t expect to live long because he had chronic emphysema.

His victims included Christians and a 14-year-old boy

He ambushed and killed William Corporon, 69, and Corporon’s 14-year-old grandson, Reat Griffin Underwood, at the Jewish Community Center in Overland Park, Kansas. He then shot 53-year-old Terri LaManno at the nearby Village Shalom retirement center.

All of his victims were Christians.

During the trial, Miller frequently interrupted proceedings with outbursts aimed at the judge, jury and prosecutor. After he was convicted, he said he didn’t care if he was sentenced to death.

In his closing arguments during the penalty phase, Miller spent nearly an hour complaining that Jewish people were running the government, media and Federal Reserve. He yelled “Heil Hitler” when he was sentenced to death.

Miller is a Vietnam War veteran who founded the Carolina Knights of the Ku Klux Klan in his native North Carolina and later the White Patriot Party. He also ran on a white-power platform during campaigns for the U.S. House in 2006 and the U.S. Senate in 2010 in Missouri.