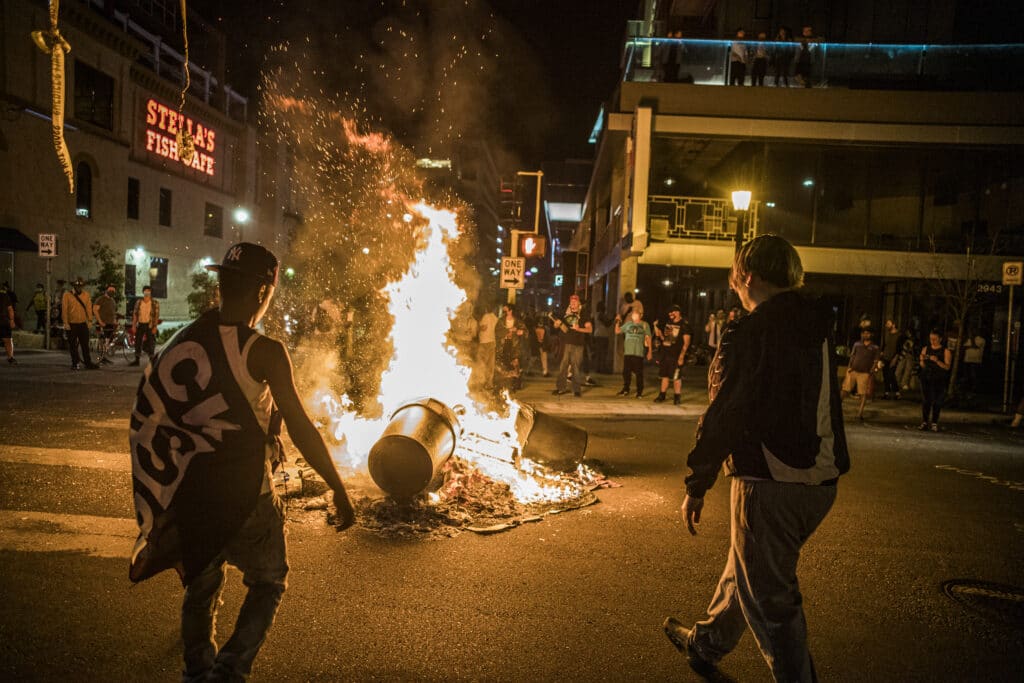 Another death of a black man at the hands of law enforcement has rocked Minneapolis. Winston Boogie Smith Jr., was fatally shot as the U.S. Marshall’s Office attempted to arrest him for illegally possessing a gun. The Associated Press has the story:

Authorities did not immediately release the name of the man killed in the shooting Thursday afternoon, but a woman who was in a longtime relationship with him identified him as Winston Boogie Smith Jr., a 32-year-old father of three.

The woman, Shelly Hopkins, said Smith, who was Black, had been harassed by police since he was in high school. She feared he had been killed when she heard about the shooting, then saw his vehicle on the news. While she was at the scene she got a call from the medical examiner’s office confirming his death.

“We have a very big spiritual connection, and my intuition kicked in and I just had a feeling,” Hopkins said. “I knew something wasn’t right. … I didn’t want to believe it.”

Authorities said Friday that members of the U.S. Marshals Fugitive Task Force were trying to arrest Smith on a warrant for illegally carrying a firearm when he was shot. The Marshals Service said in a Thursday statement that Smith, who was in a parked car, didn’t comply with law enforcement and “produced a handgun resulting in task force members firing upon the subject.”

The Minnesota Bureau of Criminal Apprehension, which is leading the investigation, said Friday that two sheriff’s deputies — one from Hennepin County and one from Ramsey County — were the officers who fired their weapons, striking Smith. The state investigators also said evidence indicates Smith fired his gun, saying a handgun and spent cartridge were found inside the car.

State investigators said a 27-year-old woman who was a passenger in the vehicle was taken to a hospital and treated for injuries from glass debris.

The U.S Marshals Service does not allow body camera usage for officers on its North Star Fugitive Task Force, the Bureau of Criminal Apprehension said, and there is no squad camera footage of the shooting.

After Thursday’s shooting, a small crowd gathered in the neighborhood, shouting expletives at police. Later in the night, people vandalized “numerous” buildings and stole from some, Minneapolis police spokesman John Elder said. A dumpster was burned and windows were smashed.

Nine people were arrested on possible charges including suspicion of riot, assault, arson and damage to property, police said.

On Friday, graffiti reading “Mpls still hates cops” and “No trial for them” marked the building next to the parking ramp where Smith was shot. A T-Mobile store and a pharmacy a few blocks down were boarded up and closed indefinitely after having their windows smashed.

The city has been on edge since the deaths of George Floyd, a Black man who died last year after he was pinned to the ground by Minneapolis officers, and Daunte Wright, a Black motorist who was fatally shot in April by an officer in the nearby suburb of Brooklyn Center.

Before the latest unrest, tensions in Minneapolis already had risen after crews early Thursday removed concrete barriers that blocked traffic at a Minneapolis intersection where a memorial to Floyd was assembled after his death. Crews also cleared artwork, flowers and other items from 38th Street and Chicago Avenue where Floyd was killed, informally known as George Floyd Square, but community activists quickly put up makeshift barriers.

Former Minneapolis Officer Derek Chauvin has been convicted of murder and manslaughter in Floyd’s death, and three other officers await trial on aiding and abetting charges. Former Brooklyn Center Officer Kim Potter is charged with manslaughter in Wright’s death.