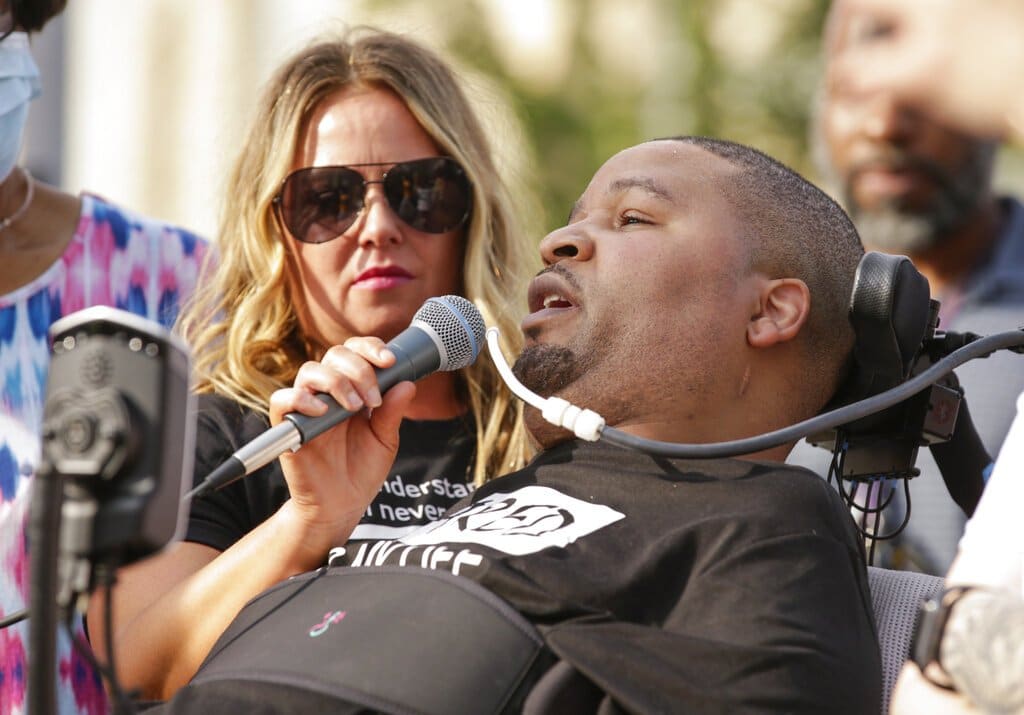 The insurance company for the City of Cedar Rapids has decided to give an $8 million settlement to a black man who was paralyzed after being shot by police. The city wanted to take the case to trial, but States Insurance “determined settlement to be in the best interests of its insured, the city.” The Associated Press has the story:

IOWA CITY, Iowa (AP) — An insurer for the City of Cedar Rapids will pay $8 million to a Black motorist who was paralyzed after a white police officer shot him during a 2016 traffic stop, the city announced Monday.

The payout will settle a long-running lawsuit brought by Jerime Mitchell, 42, over a shooting that had sparked protests and exposed tensions between Black residents and authorities in Iowa’s second largest city.

The resolution cancels a trial that had been scheduled to begin Tuesday, as the nation awaits a verdict in the trial of a former Minneapolis police officer charged with killing George Floyd. It’s the most expensive settlement over allegations of police misconduct in Iowa history.

Cedar Rapids had spent hundreds of thousands of dollars defending against the lawsuit and arguing that Officer Lucas Jones was legally justified in shooting Mitchell. A city spokeswoman said in a statement that it was prepared for trial but its insurer, States Insurance, had control over whether to settle under its policy and “determined settlement to be in the best interests of its insured, the city.”

The city admitted no wrongdoing and said its review determined Jones acted properly given the circumstances of the stop.

“The case has been divisive to our community and it is our hope that we can continue to enhance relationships that build trust between our community and our police department,” said the statement, issued by spokeswoman Maria Johnson.

Larry Rogers Jr., an attorney for Mitchell and his wife, said the settlement was significant and will help pay for Mitchell’s future health care needs. But he said the case’s most important impact was to spur the firing of Jones, who had shot and killed another suspect in 2015.

“Deadly force was not justified here,” Rogers said. “With Lucas Jones’ termination, the citizens of Cedar Rapids are safer and an overly aggressive officer … should never again wear a badge.”

Mitchell had attended rallies in his wheelchair last summer opposing police brutality and racial injustice. Activists then renewed their calls for the firing of Jones, who had returned to the force after a grand jury declined to charge him and an internal investigation cleared him of misconduct.

The Cedar Rapids Police Department promptly fired Jones last June, but not over the shootings. Instead, the department said that Jones was terminated for his handling of a stop the day before shooting Mitchell in which he let a young Black mother go instead of arresting her for driving while suspended, as required by policy.

The city opened a disciplinary investigation into that stop after Jones testified in a 2020 deposition for the Mitchell case that he turned off his body microphone “because I was violating a policy.” Mitchell’s lawyers contended Jones turned off his microphone purposely during Mitchell’s stop as well, leaving the dash camera video of the stop without sound and both sides disputing what was said.

Police have said Jones asked Mitchell to get out after smelling marijuana. Mitchell resisted being handcuffed and Jones pushed him against the truck and took him to the ground. Mitchell got up with the officer on his back and a police dog engaging him, and got in his truck and begin to drive away.

As he clung to the moving truck, Jones fired three times, with one bullet striking Mitchell in the neck. Authorities have said Mitchell was immediately paralyzed and unable to control the vehicle as it accelerated to 60 mph (97 kph) and smashed into an oncoming police SUV driven by the city’s deputy police chief, who was responding and suffered only minor injuries.

Vander Sanden presented the case to a grand jury, which declined to charge Jones but never heard Mitchell’s version of events. Mitchell remained hospitalized when the case was closed.

Activists had called on Vander Sanden to appoint a special prosecutor, since Vander Sanden had previously cleared Jones in the fatal 2015 shooting of 21-year-old Jonathan Gossman.

Vander Sanden argued that Jones was trying to defend himself, and noted that police later found a pound of marijuana in Mitchell’s truck.

The lawsuit alleged Jones was negligent throughout the stop by using a pretext to pull over Mitchell, escalating the encounter and firing at an unarmed person who posed no threat. The Mitchells had been seeking damages for their pain and suffering and the loss of his body function.

During a discovery dispute in the case, the Iowa Supreme Court ordered the city in 2019 to release investigative records to Mitchell’s lawyers without a protective order shielding them from public release.