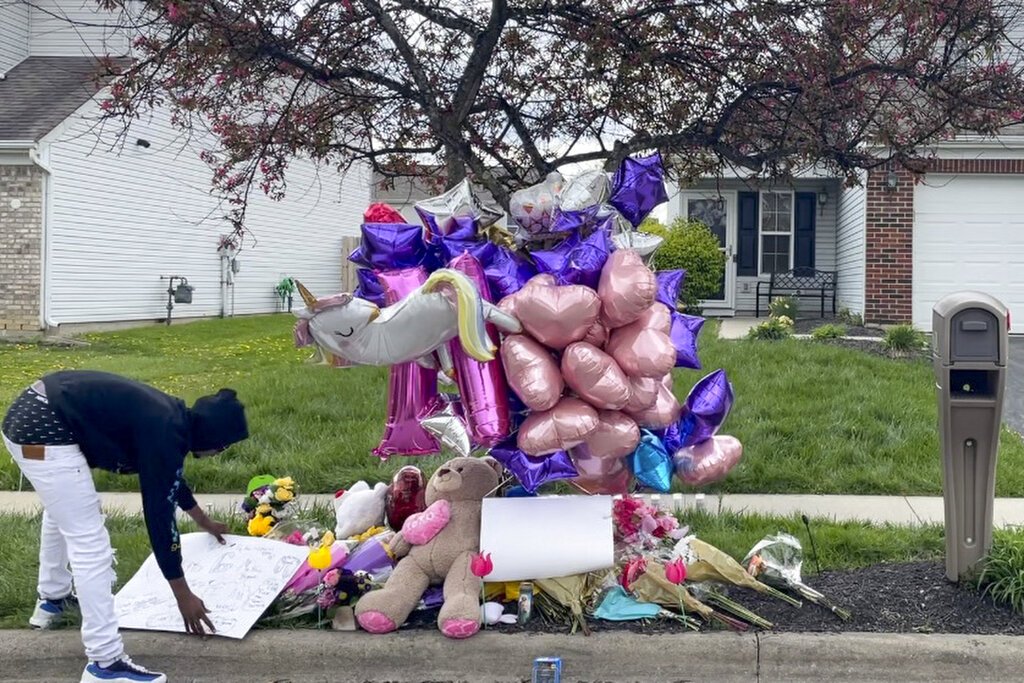 COLUMBUS, Ohio (AP) — A chaotic 911 call. A convulsive 11 seconds of violence ending in the death of an Ohio teen. A historic verdict being broadcast in the police cruiser.

A routine day in a quiet Columbus neighborhood was shattered instantly Tuesday when a police officer fired four shots at 16-year-old Ma’Khia Bryant as she swung a knife at a young woman.

“She was just a kid!” a man shouts within a second of Bryant falling to the ground.

Less than 30 minutes before the man charged with killing George Floyd was pronounced guilty, yet another Black person was dead at the hands of police in the U.S., and a city facing immense pressure to change its law enforcement patterns was once again on the defensive.

While the events leading up to the fateful 911 call that set the shooting in motion remain unclear, hours of official police footage and bystander videos detail how one of the country’s latest deadly police shootings unfolded.

At 4:32 p.m., a male dispatcher receives a call from a female caller. It remains unclear who called 911, but Bryant’s family members told The Associated Press that she herself summoned law enforcement.

“We got these grown girls over here trying to fight us. Trying to stab us. Trying to put their hands on our grandma,” the caller says as the background filled with female voices screaming and arguing. “Get here now!”

Officer Nicholas Reardon, who has been on the force since December 2019, was dispatched three minutes later. Two other officers, Eric Channel and Serge Akpalo, followed shortly behind.

“Hey, what’s going on?” Reardon asks upon exiting his vehicle at 4:44 p.m. In those next 11 seconds, Bryant was seen charging at 20-year-old Shai-Onta Lana Craig-Watkins with a kitchen knife and then moving on to 22-year-old Tionna Bonner before Reardon yelled, “Get down!” and fired four consecutive shots into Bryant’s chest.

The teenager collapsed to the ground.

While officers took turns rendering CPR, several neighbors filled the residential street. Others stood in their driveways and doorways, shaking their heads. Some had heard the gunfire from their backyards while others were in the middle of unloading groceries from their car.

But almost every single witness that day stopped to film the aftermath of an incident they are now all too familiar with: the killing of another Black person in America at the hands of law enforcement.

Reardon, who is white, responds, “She had a knife. She just went at her.”

Another neighbor was heard on body camera footage saying, “You ever hear of de-escalating? No, you guys just shoot.”

While Reardon faced recrimination at the scene, his split-second decision to shoot was commended by the national Fraternal Order of Police, which called it “an act of heroism, but one with tragic results.”

Meanwhile, Akpalo, the only Black officer who responded, began to gather and separate the various witnesses and placed them in police vehicles.

Craig-Watkins, the first woman to be attacked by Bryant, was put in the backseat where dashcam footage showed her weeping for several minutes as dozens of officers from a neighboring department arrived on the scene.

Around 5:05 p.m., as Craig-Watkins remained in the backseat, waiting to be interviewed by state investigators, audio of a judge speaking interrupts the flow of dispatches from the police radio.

The exact source of the audio wasn’t clear, but a live reading of the guilty verdict in the murder trial of Derek Chauvin, the Minneapolis police officer who killed Floyd, is heard streaming through the cruiser.

The audio is suddenly interrupted by Akpalo, who comes in to check on the witness.

“You still doing OK?” he asks.

“Yeah,” Craig-Watkins replies wearily as the officer shuts off the audio at 5:07 p.m. — with one police killing aftermath’s end colliding with the beginning of another.

Previous Article
what is hidden in Iran’s nuclear underground facilities?!!
Next Article
Gun violence: Disarming could be the solution