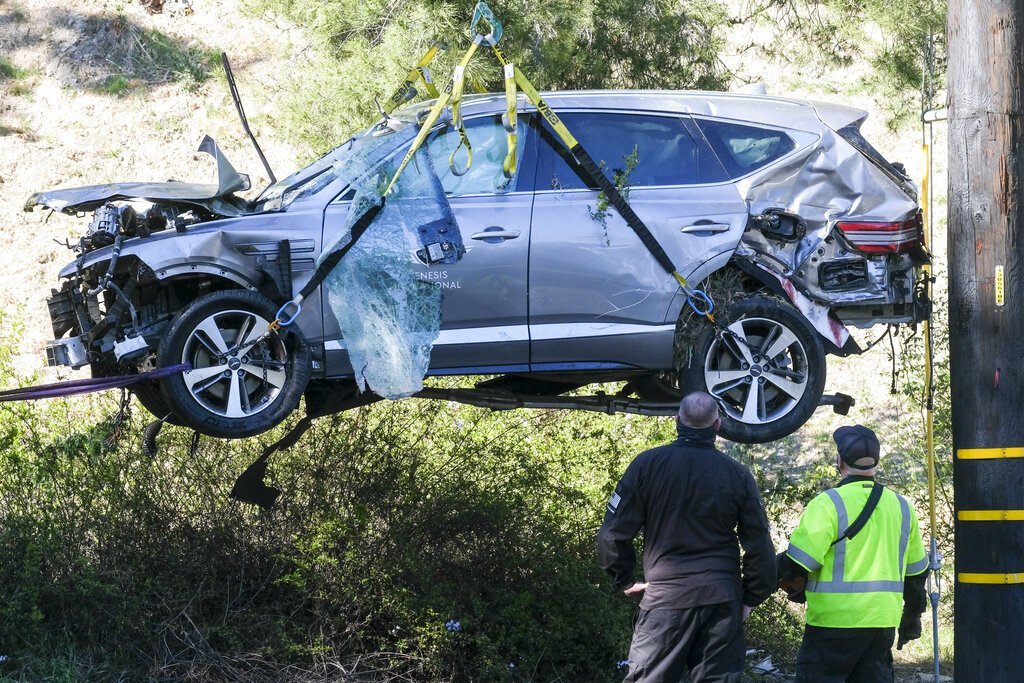 The sheriff for Los Angeles County is holding a press conference today to discuss his findings investigating golf legend Tiger Woods crashing his SUV. Law enforcement did not request a search warrant to check his blood for drugs or alcohol. In 2017, Woods was charged with a DUI and checked himself into rehab for prescription drug abuse. The Associated Press has the story:

LOS ANGELES (AP) — The sheriff for Los Angeles County plans to announce Wednesday what caused golf icon Tiger Woods to crash an SUV in Southern California earlier this year. The athlete was seriously injured in the wreck.

Sheriff Alex Villanueva had previously said detectives had determined the cause of the crash but he would not release it, citing privacy concerns and a purported need for Woods’ permission to divulge information.

The sheriff “will discuss the findings of the recent traffic collision involving Mr. Tiger Woods, to include the causal factors and collision report” during a news conference Wednesday morning in Los Angeles, the sheriff’s department said in a statement.

It was not immediately clear Tuesday whether Woods — who previously named his yacht “Privacy” — had any involvement in the expected announcement.

Woods, who is from the Los Angeles area, had been back home to host his PGA tournament, the Genesis Invitational at Riviera Country Club, when the crash happened on Feb. 23.

He was driving an SUV loaned to him by the tournament when he struck a raised median in Rolling Hills Estates, just outside Los Angeles. The SUV crossed through two oncoming lanes and uprooted a tree on a downhill stretch that police said is known for wrecks.

The athlete is in Florida recovering from multiple surgeries. Woods has never gone an entire year without playing, dating back to his first PGA Tour event as a 16-year-old in high school.

Rory McIlroy, a four-time major golf champion who lives near Woods, said he visited him on March 21.

“Spent a couple hours with him, which was nice. It was good to see him,” McIlroy said from the Masters on Tuesday. “It was good to see him in decent spirits. When you hear of these things and you look at the car and you see the crash, you think he’s going to be in a hospital bed for six months. But he was actually doing better than that.”

Villanueva faced criticism for weeks for his comments about the crash, including calling it “purely an accident” and saying there was no evidence of impairment. Documents show that Woods told deputies he did not know how the crash occurred and didn’t remember driving.

Detectives searched the data recorder of the 2021 Genesis GV80 SUV, known as a black box. Investigators did not seek a search warrant, however, for Woods’ blood samples, which could be screened for drugs and alcohol.

In 2017, Woods checked himself into a clinic for help in dealing with prescription drug medication after a DUI charge in his home state of Florida.