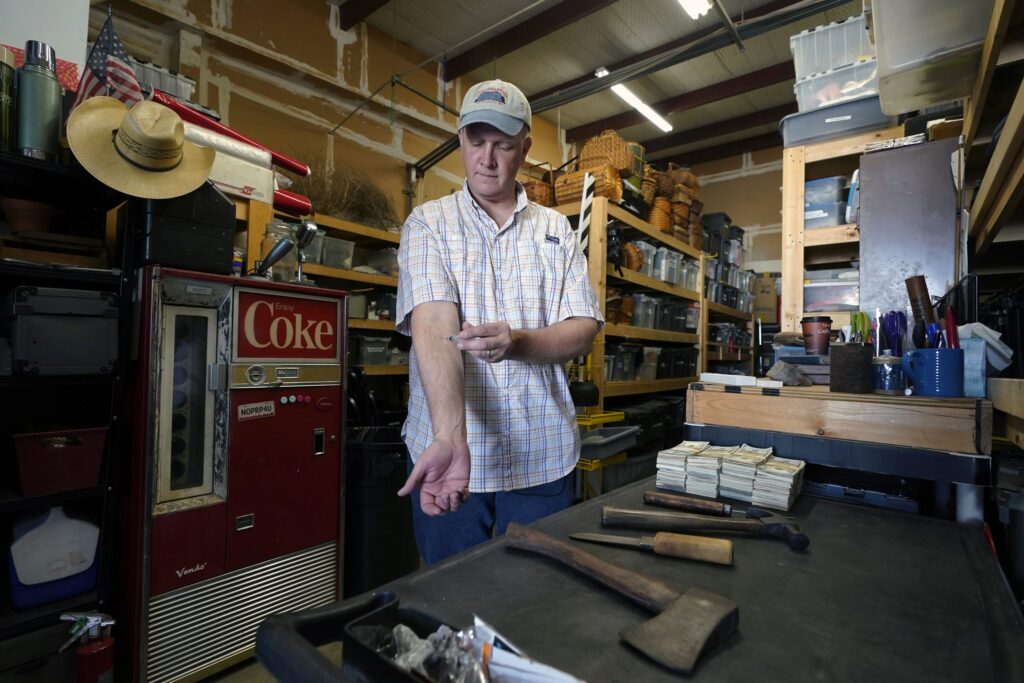 Some opposed to vaccines are taking information online and manipulating it to fit their agenda, hurting people in the process who they are using. Dr. Michelle Rockwell, Scott Reeder, Robert Oswald and Nicole Baldwin each found themselves victims of these cruel COVID-19 vaccine myths. The Associated Press has the story:

(AP) Dr. Michelle Rockwell lost a pregnancy in December and shared her heartache with her 30,000 Instagram followers. Weeks later, she received the COVID-19 vaccine and posted about that, too.

By February, Rockwell was getting past the grief and finally starting to experience moments of joy. But then, to her horror, social media users began using her posts to spread the false claim that she miscarried as a result of the shot.

“They said horrible things to me, like how could I possibly get the vaccine, that I was a baby killer, and that I would be infertile forever and would never have babies again,” said Rockwell, a 39-year-old family medicine doctor from Tulsa, Oklahoma.

Related: Low vaccine rates in parts of the country cause concern

Even though she knows that research shows the vaccine is safe for pregnant women, she said the posts brought her trauma to the surface and hurt her “to the core.”

From a movie prop master in Texas to a professor in New York, people across the country have found themselves swept into the misinformation maelstrom, their online posts or their very identities hijacked by anti-vaccine activists and others peddling lies about the outbreak.

Sharing other people’s posts or photos out of context is a common tactic in the disinformation playbook because it’s an “easy, cheap way to gain credibility,” said Lisa Fazio, a Vanderbilt University psychology professor who studies how false claims spread.

But during the COVID-19 pandemic, experts warn, false or misleading posts can mean the difference between someone taking precautions or not.

“When you’re in a situation where the world is confusing, you’re trying to latch on to what’s true. A common suggestion is to listen to the experts,” Fazio said. “If you have people pretending to be those experts or grabbing that credibility, then that can cause a lot of havoc.”

Scott Reeder, a movie and TV prop master in Austin, Texas, who frequently shares jokes and film industry secrets with his 1 million TikTok followers, posted a short video in September demonstrating how retractable stunt knives, syringes and icepicks are used on a movie set.

In December, he learned that a clip of the footage was being misused on Facebook and Twitter. Someone had isolated the part of the video where he pushes the spring-loaded syringe into his arm, and falsely claimed that politicians overseas are using the devices to fake their COVID-19 vaccinations.

Reeder was able to tamp down the falsehoods with help from TikTok followers who vouched for him and by releasing a second video outlining the misinformation. But it upsets him that his posts were used to promote a conspiracy theory he knows is false.

“I’m just trying to make people laugh with my dad jokes and my prop information,” Reeder said. “But people just try to suck you in or utilize your content to push their agenda.”

Robert Oswald, a professor of molecular medicine at Cornell University, hadn’t even put anything on social media when he learned his name was being used in viral posts claiming the coronavirus was “imaginary and fictitious.”

A bogus statement claimed Oswald had done research that found COVID-19 was “just another flu strain.” Some of the posts included his professional photo and office address.

“It said I had some sort of lab in California. It said I was a virologist. None of that’s true,” Oswald said. “I was pretty horrified by it all, obviously.”

Oswald, who doesn’t study viruses in his work, disavowed the posts on his professional webpage and responded to each message he received with the truth, though some refused to believe it.

Powerful or dramatic claims can be especially difficult to stamp out.

“A Cornell professor warning about COVID, that’s boring. The same professor saying COVID is a hoax, well, that’s interesting and guarantees traffic,” said Dr. Elias Aboujaoude, a psychiatrist and Stanford University professor who studies the intersection of psychology and technology.

Dr. Nicole Baldwin, a Cincinnati pediatrician who posted a video in support of vaccines in January 2020, said she was subjected to harassing messages, calls to her office, one-star reviews of her work, and memes that used her picture and falsely claimed she was under investigation for “drugging” autistic children.

She now offers support over the phone and via email to people who have found themselves in her position — including Rockwell.

“I look back at that time in January now, actually, with gratitude, because it got me to the point where I am right now,” Baldwin said. “But in that period that I was there in January, I certainly wasn’t saying, ‘Yay, this is amazing.’ So I’m trying to help other people.”