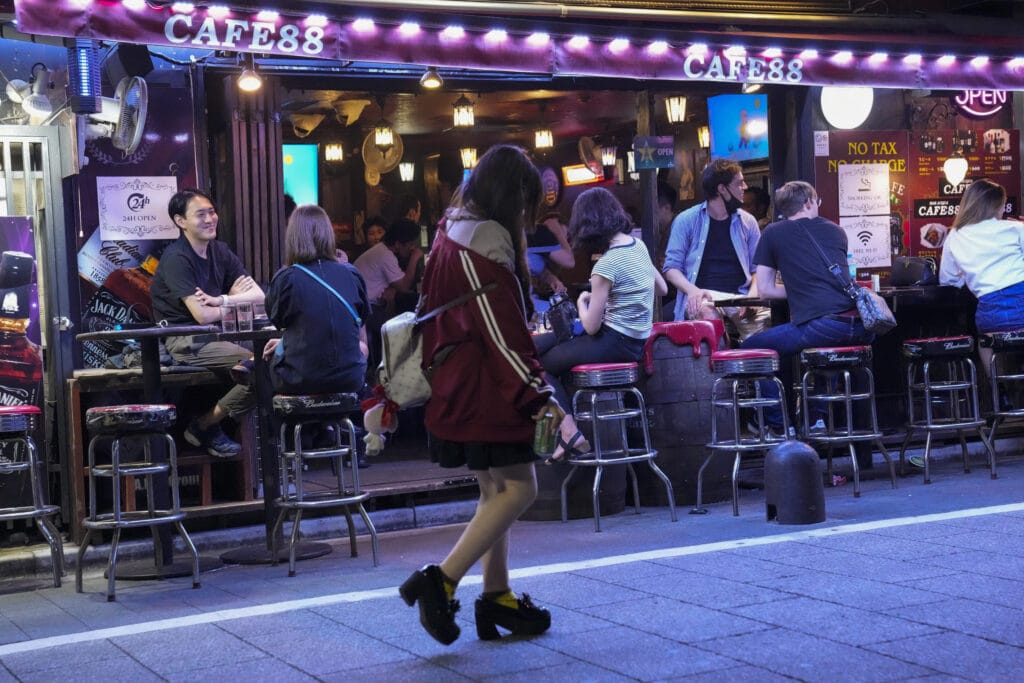 Frustrated imbibers in Tokyo are defying Japan’s requests to tone down the social drinking. Nobody seems convinced by the scientific evidence provided by the government. The Associated Press has the story:

TOKYO (AP) — On the eve of the Tokyo Olympics, the government’s attempt to curb a coronavirus surge by targeting drinkers is drowning in liquor, frustration and indifference.

Japan has asked the city’s restaurants and bars to close by 8 p.m., if not entirely, to keep people from socializing in close contact with strangers and spreading the virus, but the state of emergency hasn’t deterred many. Instead, defiant drinkers moved outdoors, and many bars in Tokyo’s famed nightlife districts are bustling with defiant customers.

“Nobody is convinced when (the government) victimizes people who are drinking alcohol without showing decent scientific evidence, even while going ahead with the Olympics,” said Mio Maruyama, a 28-year-old real estate industry worker who was chatting with her colleagues on the street in Tokyo’s Shinjuku district.

She says she’s interested in watching the Games, especially new sports like skateboarding and Japan’s Rui Hachimura, an NBA star, “but when I think of how politicians are playing around with this, I’m not quite rooting for this event from my heart.”

“It’s not that we are breaking the rules just because we’re against the inconsistency between politicians’ words and actions,” she said, referring to a 40-person reception for International Olympic Committee members on Sunday that included the prime minister and the governor of Tokyo. “But when you see such things, you might think that rulebreakers were right in doing what they’re doing.”

The IOC reception happened at a time when the public is barred from going to parties or even attending most Olympic events. Many defiant Japanese are frustrated by that contrast — but are hardly staying home.

At around 9:30 p.m. in Shinjuku, people crisscrossed in front of the world’s busiest train terminal. Nighttime turnout was modest compared to before the pandemic, but bar districts like Kabukicho were still illuminated with neon lights from a few food establishments that were still open after 8 p.m.

Exempted from the emergency state mandate, 24/7-open convenience stores were busy with shoppers. Near one of the shops, some drinkers were talking with city workers wearing green Tokyo Metropolitan Government vests who were asking people to refrain from drinking and chatting outside.

On a quiet street in east Shinjuku, Naoto Suga picked up a can of lemon-flavored liquor that his friend had just brought him. They sat on a curbside, along with around a dozen others who were also drinking on the street.

“We’ve been here every night for the past three days or so,” said Suga, 25, who works in a nearby apparel shop.

Suga, who hasn’t received the COVID-19 vaccine yet, also lamented the slower rollout in Japan, especially for younger people. Everyone 12 and older is eligible to be vaccinated, but younger people are last in line. Only 22% of Japan’s population has been fully vaccinated so far.

“To be honest, I’m for hosting the Olympics; it’s better than not doing so given the debt of venue buildings,” he said. “But I don’t quite have a particular sport I want to watch. I’ve lost interest.”