Does Derek Chauvin have a chance appealing? 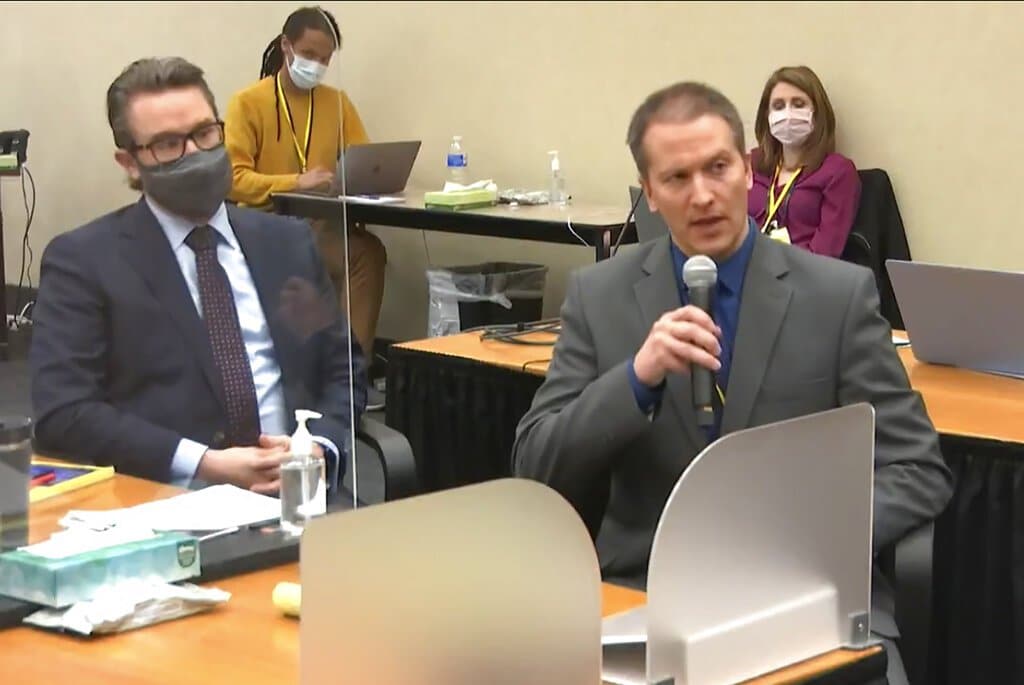 After being convicted on three counts in the death of George Floyd, former Minneapolis Police Officer Derek Chauvin now has a chance to appeal. There are several grounds he will likely use for his appeal, but he probably doesn’t have a good chance at getting the convictions reversed. The Associated Press has the story:

Analysis: Doesn’t look good that Derek Chauvin will be able to reverse his convictions

Chauvin, who is white, kneeled on Floyd’s neck for nearly 9 1/2 minutes last May, killing the 46-year-old Black man and sparking some of the largest protests in U.S. history. His conviction on murder and manslaughter charges was seen by many across the country as a civil-rights milestone.

Here’s a look at some of the issues Chauvin’s lawyers might cite in their expected appeal, and their chances of prevailing.

WHAT ARE POSSIBLE ISSUES THE DEFENSE COULD RAISE ON APPEAL?

The defense has said it was impossible for Chauvin to get a fair trial in Minneapolis because of pretrial publicity and community pressure on jurors to convict. That claim is sure to underpin any appeal.

As they arrived at and left the courthouse each day for testimony, jurors passed clear signs that the city was preparing for renewed protests. The courthouse downtown was encircled by razor wire and guarded by armed troops. Most storefront windows were boarded up.

A prime target of an appeal would be key rulings by trial Judge Peter Cahill, including that the trial should remain in Minneapolis rather than be moved and that jurors should be sequestered only for deliberations.

Cahill also refused to delay the trial after Minneapolis announced a $27 million settlement with Floyd’s family during jury selection. The defense says that suggested guilt before jurors even heard evidence.

The defense has decried as prosecutorial misconduct remarks by the state during closings, including that aspects of the defense case were “nonsense.” That claim could make its way into an appeal.

HAVE RETRIALS EVER BEEN GRANTED BECAUSE JURORS FELT PRESSURED?

A U.S. appeals court in 1999 vacated white Detroit police Officer Larry Nevers’ conviction in the beating death of a Black motorist, noting how at least one juror had learned the National Guard was on standby in case Nevers was acquitted and violence ensued.

Related: Actress Speaks Up About Chauvin at Oscars

“The Court cannot imagine a more prejudicial extraneous influence than that of a juror discovering that the City he or she resides in is bracing for a riot,” it said, adding that letting the conviction stand would send the wrong message that rights to an impartial jury “do not extend to an obviously guilty defendant.”

Similarly, an appeals court in Florida ordered a new trial for a plain-clothed Hispanic officer, William Lozano, who fatally shot Black motorcyclist Clement Lloyd in 1989. A passenger on the motorcycle also died. Protests erupted in Miami.

At the 1991 Miami trial, jurors convicted Lozano of manslaughter. The appellate ruling overturning the conviction highlighted how some jurors admitted they feared an acquittal would renew protests. At his 1993 retrial in Orlando, Lozano was acquitted.

COULD COMMENTS BY POLITICIANS LEAD TO A RETRIAL FOR CHAUVIN?

Judge Cahill seemed to think that’s at least a possibility.

He rebuked U.S. Rep. Maxine Waters on Monday for telling a crowd in a Minneapolis suburb days before deliberations started that, if Chauvin wasn’t convicted of murder, “we’ve got to get more confrontational.”

Cahill called the California Democrat’s comments “disrespectful to the rule of law,” saying elected officials shouldn’t comment about ongoing trials. “Their failure to do so, I think, is abhorrent,” he said.

Cahill indicated that Waters’ comments could be appealable.

“I’ll give you that Congresswoman Waters may have given you (the defense) something on appeal that may result in this whole trial being overturned,” he said in court Monday.

HOW DOES THE DEFENSE SHOW JURORS WERE IMPROPERLY INFLUENCED?

Mike Brandt, a leading Minneapolis-based criminal attorney who closely followed the Chauvin trial, said Chauvin’s attorneys have heavy lifting to do before they can argue on appeal that jurors were unduly influenced or pressured.

He said appellate courts won’t simply let Chauvin’s lawyers theorize that jurors might have heard Waters’ comments. Rather, they must offer proof that specific jurors heard the comments and that those comments influenced their votes to convict, he said.

The same goes for statements by prosecutors allegedly disparaging the defense case and for the contention that jurors found Chauvin guilty because they feared triggering angry protests if they didn’t.

The defense must present compelling evidence — typically admissions from jurors themselves — that such statements and fears caused them to find Chauvin guilty, Brandt said.

WHAT ARE THE ODDS CHAUVIN WINS HIS APPEAL?

The odds are heavily against Chauvin, Brandt and other legal experts say.

Even if appellate judges find Chauvin’s judge made erroneous rulings, they still must answer a decisive question: If Cahill had ruled differently, such as by granting a change-of-venue motion, is it conceivable the trial’s outcome could have been different? If the answer is no, Brandt said, they won’t toss the verdicts.

An appeals court may also look favorably on Cahill’s reasoning in denying a change of venue. Cahill had noted that media scrutiny of Floyd’s death was nearly as intense across Minnesota, suggesting that any alternate city would have faced the same challenge of preventing news from tainting the jury.

Also, higher courts have repeatedly ruled that jury selection is an effective way to counteract unflattering media accounts of a defendant and to ensure even-handed jurors are impaneled.

And Brandt said Cahill gave Chauvin’s lawyers more latitude than usual in questioning potential jurors about biases and in striking ones they thought couldn’t be fair — latitude appellate courts would likely note.