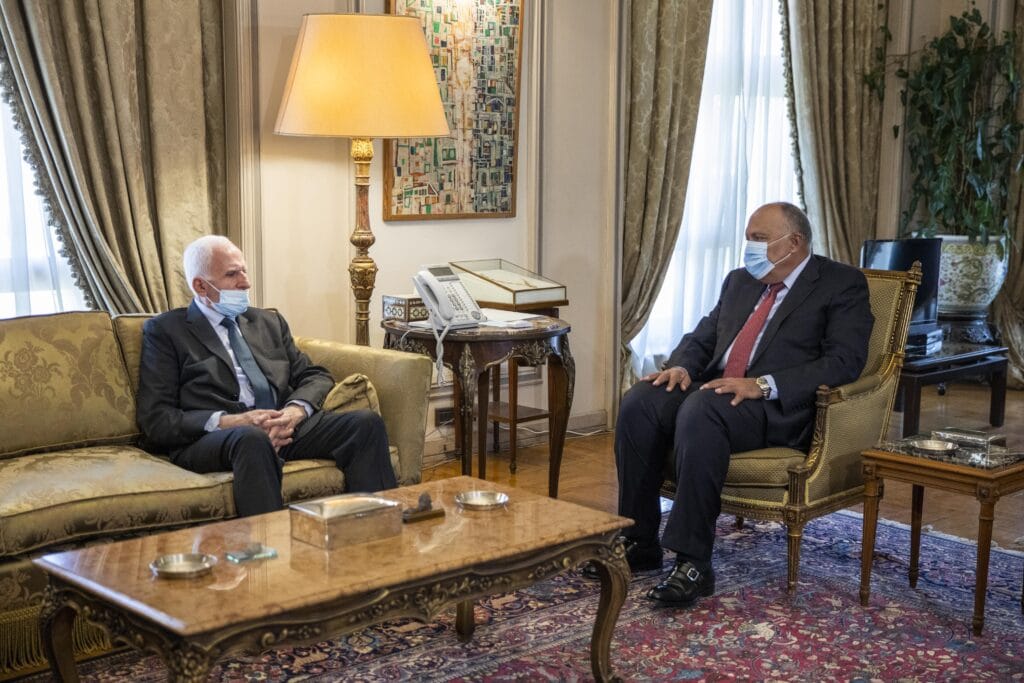 Egypt, which has proven to be a helpful mediator in past Middle East conflicts, has brought about a cease-fire between Israel and Hamas militants in Gaza. Egyptian state media report that the halt in fighting will start early Friday morning. The Associated Press has the story:

Mediation by Egypt brings about cease-fire in Israel-Hamas war

CAIRO (AP) — Egypt on Thursday reasserted itself as an indispensable mediator in the Middle East after it successfully brokered a cease-fire deal in the short but costly Israel-Hamas war that killed scores of people and caused much destruction in the Gaza Strip.

In Cairo, state media said the halt in the fighting would take effect in the early hours of Friday, and that two Egyptian delegations would head to Tel Aviv and the Palestinian territories to follow up on the deal’s implementation.

It’s the latest instance in which Egypt has served as a mediator between Israel and Gaza’s ruling militant Hamas group, which have fought four wars in just over a decade. Egypt borders both Israel and the Gaza Strip, and has been a key player since Israel withdrew troops from Gaza in 2005 and Hamas seized the territory in 2007.

Sine the outbreak of the latest, 11-day war, Egypt worked to provide a framework that both sides could agree on, according to diplomatic officials. It was not immediately clear what the terms of the cease-fire were, but its success is likely to bolster the country’s diplomatic credentials.

Related: A Closer Look At The Russia-Ukraine Border Conflict

“By virtue of geography and its ties to all parties, Egypt is unique in this matter,” said Michael Hanna, the U.S. program director at the International Crisis Group. “And of course, it seeks to demonstrate its regional relevance and influence to all parties concerned, including the United States.”

The role Egypt played in mediating the conflict could help improve the strained ties between President Abdel Fattah el-Sissi’s government and the new U.S. administration. President Joe Biden spoke for the first time on Thursday with the Egyptian president since being elected, according to el-Sissi’s office, hours before news that Israel had agreed to the Egyptian proposal.

The diplomatic win in Gaza could also gain Egypt some regional prestige in its rivalries, including with Turkey and the United Arab Emirates. The UAE last year moved to establish ties with Israel.

Egypt fought four wars with Israel between 1948 to 1973. The two former enemies normalized ties in 1980, and since then have increasingly cooperated on security issues. Israel has praised el-Sissi’s government for its help, and in turn allowed Egyptian forces greater freedom near the border to fight militants in Sinai.

Cairo’s ties with Hamas have at times hung by a thread. Egypt, along with Israel, continues to enforce a blockade that has devastated the Gazan economy. Hamas is a militant Palestinian branch of the Muslim Brotherhood, a political Islamic movement banned in Egypt, and Egypt’s pro-government media often depict Hamas as a threat. Still, Egypt has repeatedly been an intermediator for Hamas, working out cease-fires in the previous three Hamas-Israel conflicts and easing other crises with Israel.

Egypt also walks a careful line with its own citizens, who deeply oppose Israel’s policies toward the Palestinians. As Egyptian and Israeli officials quietly collaborate on security, the government rarely is strongly critical of Israel in public — though it gives free rein to prominent personalities aligned with the government to denounce Israel or portray it as the enemy in the media.

Popular culture follows suit. Last year, a futuristic Egyptian television drama, set in 2120, drew criticism from Israel for predicting its demise by then. It had been approved by government censors. As tensions increased last week, Egyptian singers released a song called “We redeem you, Palestine,” in the techno-splashed rap-like style known as Mahraganat. Also, many Egyptians have taken to social media to express solidarity with Gaza.

Egypt’s government, which has banned any protests, has not allowed pro-Palestinian rallies. But its official rhetoric this time has been more critical of Israel — from a government-aligned cleric’s sermon to statements by Foreign Minister Sameh Shoukry. The rapidly increasing death toll on the Gaza side lent them weight. The fighting has killed at least 230 Palestinians, including 65 children, according to Gaza health officials, while 12 people in Israel have been killed by rockets from Gaza, including a 5-year-old boy and a 16-year-old girl.

El-Sissi has also promised $500 million in aid for Gaza to rebuild, as well as eased its blockade to send ambulances and supplies. A few Gaza residents have been transported to Egyptian hospitals for treatment.

Mustafa Kamel el-Sayyed, professor of political science at the Cairo University, said that Egypt could score points both with President Joe Biden and with its own people by being seen simultaneously as a peacemaker and as championing the Palestinian cause.

Hossam Bahgat, founder and director of the Egyptian Initiative for Personal Rights, said the new Palestinian initiative is an also an opportunity to call for the release of two Egyptian pro-Palestinian activists, Ramy Shaath and Mohamed Masry, who were arrested two years ago and have remained detained without trial since.

They are among thousands who have been held without due process in Egypt’s widescale crackdown on personal freedoms. Shaath is the son of Nabil Shaath, an adviser to Palestinian President Mahmoud Abbas.

Previous Article
Putin threatens enemies: ‘We’ll knock their teeth out’
Next Article
US and Russia feuding over Arctic shipping