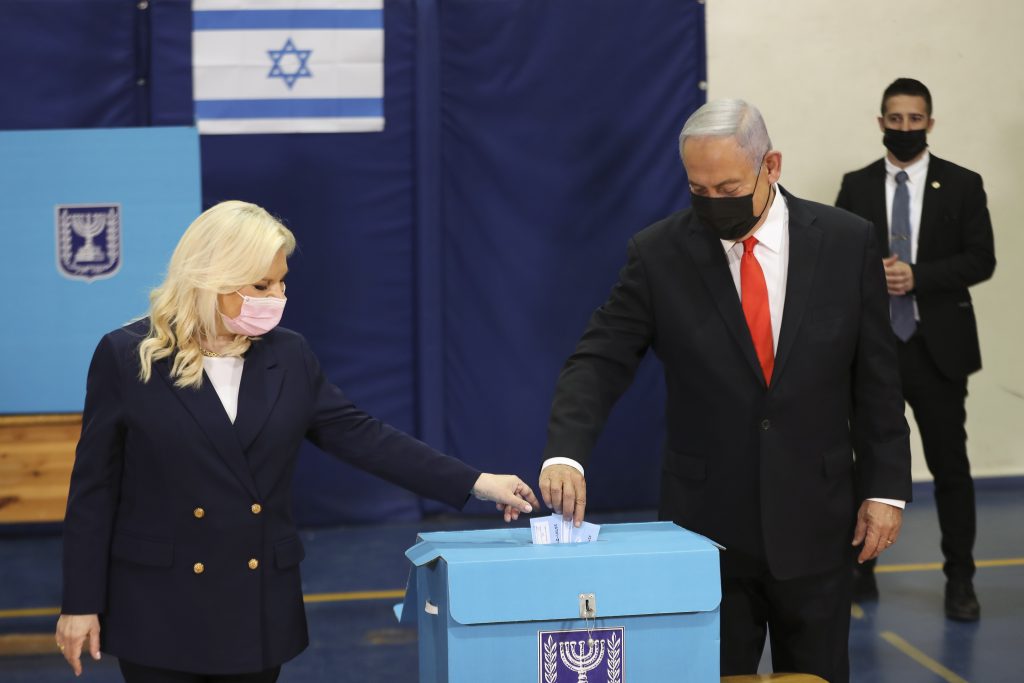 Israeli elections have been particularly divisive the past two years, with the voters unable to make a firm choice for Prime Minister Benjamin Netanyahu and his Likud party. Exit polls show that this most recent election resulted in neither the Netanyahu block of parties nor his opponents’ coalition gaining a majority, leaving Netanyahu’s future uncertain. The AP ran a story covering this:

Virtual deadlock between Netanyahu and his opposition

JERUSALEM (AP) — Israeli parliamentary elections on Tuesday resulted in a virtual deadlock for a fourth time in the past two years, exit polls indicated, leaving Prime Minister Benjamin Netanyahu with an uncertain future and the country facing the prospect of continued political gridlock.

The exit polls on Israel’s three main TV stations indicated that both Netanyahu and his religious and nationalist allies, along with a group of anti-Netanyahu parties, both fell short of the parliamentary majority required to form a new government. That raised the possibility of an unprecedented fifth consecutive election later this year.

The election was seen as a referendum on Netanyahu’s polarizing leadership style, and the initial results showed that the country remains as deeply divided as ever, with an array of small sectarian parties dominating the parliament.

The results also signaled a continuing shift of the Israeli electorate toward the right wing, which supports West Bank settlements and opposes concessions in peace talks with the Palestinians. That trend was highlighted by the strong showing of an ultranationalist anti-Arab religious party.

Netanyahu unable to break out of rut of inconclusive elections

After three previous inconclusive elections, Netanyahu had been hoping for a decisive victory that would allow him to form a government with his traditional ultra-Orthodox and hard-line nationalist allies and seek immunity from corruption charges.

In an address to supporters early Wednesday, a subdued Netanyahu boasted of a “great achievement” but stopped short of declaring victory. Instead, he appeared to reach out to his opponents and called for formation of a “stable government” that would avoid another election.

“We must not under any circumstances drag the state of Israel to new elections, to a fifth election,” he said. “We must form a stable government now.”

Exit polls have often been imprecise in the past, meaning the final results, expected in the coming days, could still shift the balance of power. If the final results are in line with the exit polls, there is no guarantee that Netanyahu or his opponents will succeed in putting together a coalition.

“All three options are on the table: a Netanyahu-led government, a change coalition that will leave Netanyahu in the opposition, and an interim government leading to a fifth election,” said Yohanan Plesner, president of the Israel Democracy Institute.

Wild card Naftali Bennett could choose either side

Several right-wing parties have vowed never to sit in a government with Netanyahu. And Naftali Bennett, a former Netanyahu ally turned harsh critic, refused to endorse either side during the campaign.

Bennett shares Netanyahu’s hard-line nationalist ideology and would seem to be more likely to ultimately join the prime minister. But Bennett has not ruled out joining forces with Netanyahu’s opponents.

In a speech to his supporters, Bennett declined to take sides. He vowed to promote right-wing values but also took several veiled swipes at the prime minister’s leadership style.

“Now is the time for healing,” he said. “The norms of the past will no longer be acceptable.” He said he would move the country “from leadership that is interested in itself to a professional leadership that cares.”

Bennett has indicated he will drive a hard bargain with Netanyahu, demanding senior Cabinet ministries and perhaps even a power-sharing arrangement that includes a stint as prime minister.

In addition, their partners would also include a pair of ultra-Orthodox religious parties and the “Religious Zionists,” a party whose leaders are openly racist and homophobic. One of its leaders, Itamir Ben-Gvir, is a disciple of the late Rabbi Meir Kahane, whose Kach party was branded a terrorist group by the U.S. for its anti-Arab racism before Kahane was assassinated in New York in 1990.

Relying on the party could be deeply embarrassing for Netanyahu on the international stage, particularly as he tries to court the new Biden administration.

The election was a referendum on Netanyahu’s accomplishments

The election campaign was largely devoid of substance and was seen instead as a referendum on Netanyahu’s divisive rule.

During the campaign, Netanyahu emphasized Israel’s highly successful coronavirus vaccination campaign. He moved aggressively to secure enough vaccines for Israel’s 9.3 million people, and in three months the country has inoculated some 80% of its adult population. That has enabled the government to open restaurants, stores and the airport just in time for election day.

He also tried to portray himself as a global statesman, pointing to the four diplomatic accords he reached with Arab countries last year. Those agreements were brokered by his close ally, then-President Donald Trump.

Netanyahu’s opponents say the prime minister bungled many other aspects of the pandemic, particularly by allowing his ultra-Orthodox allies to ignore lockdown rules and fuel a high infection rate for much of the year.

Over 6,000 Israelis have died from COVID-19, and the economy continues to struggle with double-digit unemployment.

They also point to Netanyahu’s corruption trial, saying someone who is under indictment for serious crimes is not fit to lead the country. Netanyahu has been charged with fraud, breach of trust and accepting bribes in a series of scandals that he dismisses as a witch hunt by a hostile media and legal system.

Even Netanyahu’s reputation as a statesman has suffered in recent days. The United Arab Emirates, the most important of the four Arab nations to establish official diplomatic ties with Israel, last week made clear that it did not want to be used as part of Netanyahu’s re-election bid after he was forced to call off a visit to the country. The Biden administration also has kept its distance, a contrast to the support he received in past elections from Trump.

The split in votes favors Netanyahu’s opponents, but Naftali Bennett could save him

Netanyahu’s Likud party was projected to emerge as the largest individual party, with just over 30 seats in the 120-seat parliament, followed by the centrist opposition party Yesh Atid, with some 17 seats.

The remainder of the parliament would be divided between some 10 other small parties. These range from an Arab party to left-wing secular parties to a pair of secular, right-wing parties that oppose Netanyahu.

Altogether, Netanyahu and his allies were projected to control 53 to 54 seats, while his opponents are expected to control some 60 or 61, with Bennett controlling the remainder.

Netanyahu’s opponents included a diverse array of parties that had little in common beyond their shared animosity toward him. Even if his opponents end up controlling a majority of seats, it will be difficult for them to bridge their ideological differences on such lightning rod issues as Palestinian statehood and the role of religion in the country.

They also were hurt by the disintegration of the main Arab party in parliament. A renegade member ran separately but appeared not to win enough seats to enter parliament, robbing the alliance of key votes.

Tuesday’s election was sparked by the disintegration of an emergency government formed last May between Netanyahu and his chief rival at the time. The alliance was plagued by infighting, and elections were forced after they failed to agree on a budget in December.

Netanyahu’s opponents have accused him of fomenting deadlock in hopes of bringing about a friendlier parliament that will grant him immunity from prosecution.

After the results come in, attention will turn to the country’s figurehead president, Reuven Rivlin.

He will hold a series of meetings with party leaders and then choose the one he believes has the best chance of forming a government as his prime minister-designate. That could set off weeks of horse-trading.

Voting in Jerusalem on Tuesday, Rivlin said the deadlock has had a price.

“Four elections in two years erode public trust in the democratic process,” he said, even as he urged Israelis to vote again. “There is no other way.”