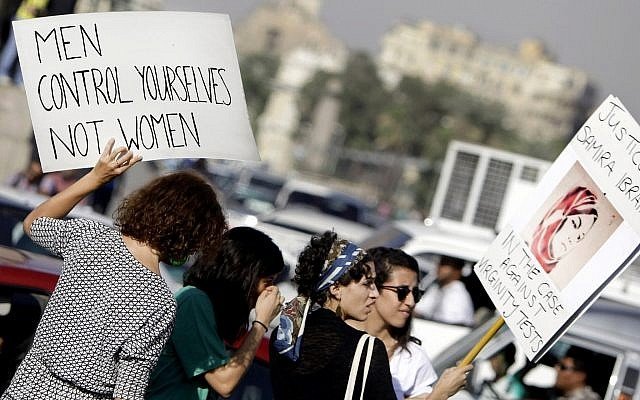 When I arrived in Cairo recently and submitted my US passport to the passport control officer, I thought he would welcome me as an Egyptian returning home. He did not. Instead, he spent more time examining my passport. Eventually he asked me to clear the line for his next passenger and “wait there for a second.” I did not know what to expect but my first concern was that he might find me wanted for spreading “false news “against the State of Egypt since, as a journalist, I appear regularly on international TV channels. The officer eventually gestured allowing me to go without a word. The following day I contacted the University of Cairo and the Journalists Syndicate to arrange for my scheduled public presentations at both institutions. They requested that I submit a complete resume and a detailed summary of the content of my lectures. I refused to comply with what they described as a “security requirement” to get me clearance to speak publicly to students and journalists. I asked them to cancel the events and thanked them for their prior invitation.

SPREADING FALSE NEWS IS NOT A JOKE

In March 2021, a court in Egypt sentenced Sanaa Seif to 18 months in prison for “spreading false news.” Prosecutors charged her with disseminating “false news about the deterioration of the country’s health situation, and the spread of Coronavirus in prisons,” among other charges. The 27-year-old who had already been jailed in connection of two other cases since 2014, is the sister of Alaa Abdel Fattah, a blogger who has been imprisoned since September 2019.She is the daughter of the late Human Rights lawyer Ahmed Seif al-Islam and the Cairo University professor Laila Soueif. Human Rights Watch documented numerous suspected Covid-19 outbreaks at prisons and police stations between March and July 2020, including 14 deaths.

Sanaa Seif is not the only woman to get arrested in Egypt. In April, 2020, Marwa  Arafa and Khloud Said were arrested on unsubstantiated charges of joining a terrorist group and spreading false news.  In late May 2020, authorities arrested journalist Shaima Samy on charges of spreading false news. At least ten health care workers, mostly women, were arrested for criticizing the government response to Covid-19.

Women also were among those who died in Egyptian prisons. In December 2019, Mariam Salem, 32, died in Al-Qanater prison after authorities withheld life-saving treatment including for a liver condition. The umber of detainees who died in custody between June 2013 and December 2019 could be as high as 958, according to the Geneva-based Committee for Justice. But we have a sample of detainees who died between January and September 2020. One of them, Mostafa Kasem, 54, was diabetic with a heart condition. The Egyptian-American Kasem died on January 14, in the infamous Tora prison. He had been on a hunger strike to protest his 15-year sentence. In May, Shadi Habash, a 29-year-old filmmaker died in Tora after receiving no meaningful treatment for alcoholism intoxication. The filmmaker had been jailed for directing a music video mocking Egyptian President Abdel Fattah al-Sissi. In August, Essam al-Erian, 66, a senior Muslim Brotherhood leader died in Tora’s Scorpion prison after spending 7 years in isolation. And in September 1st, five detainees died in different prisons, including Amr Abu Khalil and Ahmed Abdelnabi Mahmoud after spending many months in detention without trial or adequate medical care.

In February 2021, Egyptian authorities raided the homes of six relatives of Mohamed Soltan in an attempt to silence him. Soltan, an Egyptian-American who now lives in the U.S. had spent almost two years in Egyptian prisons before he was released under U.S. pressure. Soltan’s father, a member of the outlawed Muslim Brotherhood, was already in prison since 2013. He first was sentenced to death but now is serving a life sentence in prison.  Soltan himself was sentenced to life in prison for protesting against the military before being released and deported back to the U.S., in 2015. He was forced to give up his Egyptian dual citizenship. Back in the U.S. he filed a lawsuit in Washington, DC, federal court against former Egyptian Prime Minister Hazem el-Beblawi, who is now a senior official at the International Monetary Fund. The raids in Egypt followed the Beblawi lawsuit.

On March 12, 2021, the U.S. joined 30 other states at the UN Human Rights Council to condemn the Egyptian authorities for their Human Rights violations. More than 100 NGOs from around the world expressed their support for the March 12 joint declaration. The last joint declaration on the Human Rights situation in Egypt was signed by only 26 countries in March 2014. The recent declaration is one of the first major steps the Biden administration has been a part of since the U.S. returned to the Human Rights Council as an observer. Egypt is recognized by the U.S. and other powerful Council members as a strong security partner and a supporter of regional stability with an important role in fighting terrorism. But the U.S. and the world need to put more pressure on Egypt to at least release political prisoners as a first step.

After a brief stay in Cairo a friend dropped me off at Cairo airport to take my flight back to the U.S. He alarmed me when he said wanted persons are normally allowed in upon arrival only to be detained on their way out. At the passport control point I handed my U.S. passport and nervously waited the verdict. No “false news” accusation I was allowed to sail through. Egyptians are 7000 years old so they are not rushed to do anything including change. But for me I had to rush to catch my flight out of the country.

Previous Article
The market and mortgage interest rates
Next Article
The new Palestinian fork in the road: Will they take it ?