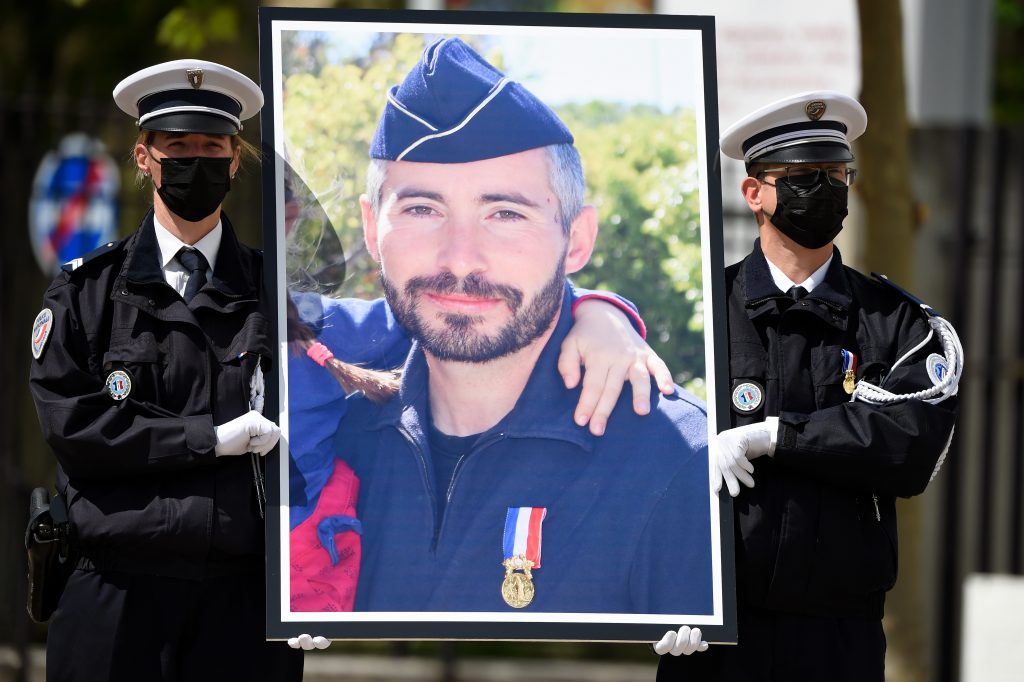 While the U.S. is making efforts to defund the police, France is going in the opposite direction. French President Emmanuel Macron is taking steps to protect the police, including ensuring that criminals who kill police officers get 30 years in prison. The Associated Press has the story:

During a time of defunding the police, France is taking steps to protect them

PARIS (AP) — “Dead or Alive.” The chilling words were scrawled on photos of three police officers in their uniforms posted last month on a wall in a Grenoble suburb, in southwest France.

To French police, feeling endangered and disrespected, this is just one more sign of an upsurge in violence targeting them and making it harder to keep France safe.

A police officer was shot to death last week on a routine check at a street corner frequented by drug dealers in the historic district of Avignon, a southern tourist mecca. The murder in broad daylight struck a chord among the French, with thousands of people joining police to pay homage Sunday to the 36-year-old officer, Eric Masson, at Avignon police headquarters.

At a solemn national tribute Tuesday to the fallen officer, Prime Minister Jean Castex vowed France would not shirk in its fight against dealers, a national priority that has put officers like Masson in harm’s way.

On orders from President Emmanuel Macron, Masson was posthumously named Chevalier, or knight, of the Legion of Honor, France’s highest award.

It was the second national homage to a police official in less than two weeks, after the fatal stabbing April 23 of an official inside the entrance of her station in the Paris suburb of Rambouillet by a man authorities say was an Islamic radical.

Experts, however, note that more French police were killed in past decades than today, but that police tactics have hardened in recent years, leading to a deficit in confidence amid claims of systemic racism within the police, racial profiling and videos showing apparent abuse and sometimes deadly violence.

Related: Hispanic Man Suing Cops Over Use of Chokehold

Still, French law enforcers have been repeatedly targeted in recent months, and some say that anti-police violence has exploded among delinquents, often drug dealers flush with weapons. The two main suspect in Masson’s killings both had records linked to drugs.

And this has struck a political chord.

“It’s a reality that there is violence in our society and it’s swelling, and that each day the role of our police is made more difficult by this violence,” the president said over the weekend.

Macron made going after drug dealers a priority

Security is a perennial issue in elections and with regional elections next month and next year’s presidential election, the topic has special traction. The centrist Macron, who is expected to try for a second term, recently made going after drug dealers a priority.

Last month, he blasted drug trafficking as “the economic matrix of violence” in an interview with the conservative-leaning newspaper Le Figaro. “To eradicate them by all means has become the mother of battles.”

While U.S. legislators are working on a sweeping effort to rein in police powers in the wake of George Floyd’s death in Minnesota last year, France’s government has instead been increasing police powers.

Britain is following a similar path with a bill to give police more powers to control increasingly disruptive protests. Police chiefs say an outdated law leaves them without sufficient means to cope. The wide-ranging bill has itself triggered protests, including some violent clashes with police amid critics’ fears the measure would significantly curb freedom of speech and assembly.

In France, police regularly fall prey to night ambushes, in Paris suburbs known for crime and drugs, or in the north, including Tourcoing, where Interior Minister Gerald Darmanin served as mayor. This week, violence erupted in the Mediterranean town of Frejus. In a classic scenario, youth throw fireworks and projectiles at police, and even firetrucks arriving to extinguish a garbage can fire, the bait to draw in police.

Yet, Sebastian Roche, a sociologist and expert on police, says that police are less at risk of being killed today than they were three decades ago. He said that 30 officers were killed on average per year in the 1980s, compared to about 10 in recent years, figures that don’t include gendarmes, a military corps with jobs like police.

Another specialist, Laurent Mucchielli, dismissed claims of a major uptick in violence as a political message, fed by the media. Anti-police posters and family snapshots of officers discovered in housing projects are “exceptional,” Mucchielli said.

Both experts agreed that the yellow vest protests that started in 2018 were bad for the image of police, who used brutal tactics to control sometimes anarchic marches by the protesters seeking economic and social justice.

Roche digs further back. Over the past 20 years, “France progressively, in stages, engaged police in aggressive policies,” notably cordoning off suburban housing projects. “These techniques diminished confidence in the police.”

Today, “the people who have the most confidence in the police in France are people who never see them intervene,” Roche said after analyzing 10 years worth of data by the national statistics agency.

“The more people see them intervene, the less confidence they have in them,” he said. Roche stressed that “people don’t reject the police. They reject certain tactics.”

Police unions have found new leverage in the loss of their colleagues to press longstanding demands, including better protection for forces and backup from what police say is a lax judicial system that fails to translate arrests into convictions and firm punishment.

Macron has promised 10,000 more officers in the streets by the end of his term and increased the police budget. At a Monday night meeting with unions, the prime minister laid out a series of measures to ensure courts get tough on anyone dishonoring the uniform and a guarantee of 30 years in prison for the killing of a police officer, the same punishment as for terrorists.

More worrisome perhaps for police than danger is what Clair, the union official, said is a growing lack of respect.

“It’s above all this notion of respect,” Clair said. “When you feel the uniform you’re wearing doesn’t get the respect of the person in front of you and you’re constantly considered badly by a part of the population, you say there’s a problem.”

Sylvia Hui contributed to this report from London.