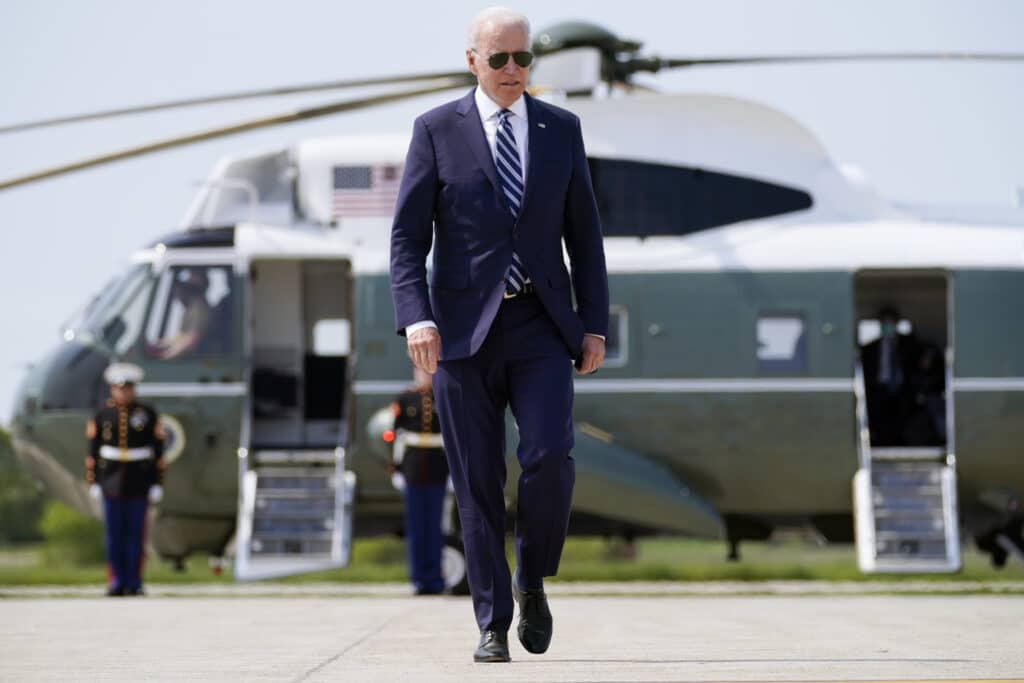 After President Joe Biden urged Israeli Prime Minister Benjamin Netanyahu to wind down the airstrikes against Hamas militants in Gaza, Netanyahu publicly announced he was going to continue the operation “until its objective is achieved.” This isn’t the first time the two have butted heads, but it is perhaps the biggest disagreement so far. The Associated Press has the story:

Biden asks Netanyahu to back off of Gaza bombings, but Netanyahu vows to continue

(AP) President Joe Biden’s efforts to persuade Benjamin Netanyahu to halt military strikes against Hamas in Gaza are plunging the two leaders into a difficult early test of the U.S.-Israeli relationship.

The two have had other moments of tension over the years, and their current differences over the war in Gaza create a challenge that Biden was trying mightily to avoid.

Biden told Netanyahu in a telephone call Wednesday that he expected “significant de-escalation” of the fighting by day’s end, according to the White House. But the prime minister came right back with a public declaration that he was “determined to continue” the Gaza operation “until its objective is achieved.”

Netanyahu did allow that he “greatly appreciates the support of the American president,” but said nonetheless that Israel would push ahead.

This is not where Biden had hoped to expend his time and energy.

Early in Biden’s term, foreign policy has taken a back seat. The president has tried to avoid getting bogged down in an interminable effort to establish an elusive Mideast peace that many of his White House predecessors have dedicated precious time to without much success.

This is not the first time Biden and Netanyahu have been publicly at odds.

As vice president, Biden kept Netanyahu waiting for a dinner meeting after the Israeli leader embarrassed President Barack Obama by approving the construction of 1,600 new apartments in disputed east Jerusalem in the middle of Biden’s 2010 visit to Israel.

Netanyahu sought to patch up hurt feelings at the dinner. But after the meal, Biden admonished the prime minister in a statement, saying the move undermined a U.S. effort to persuade the Palestinians to resume peace talks.

Later, Obama and Netanyahu’s relationship cratered as White House aides questioned the Israeli’s willingness to find accommodations with Palestinians and Sunni Arab countries to build a lasting peace in the region. Netanyahu, for his part, was furious about White House efforts to reach a nuclear deal with Iran.

Biden has a fondness for Netanyahu

Amid the tension between Obama and Netanyahu, Biden went out of his way during a 2014 speech before the Jewish Federations of North America to say that he and Netanyahu were “still buddies,” albeit with a somewhat complicated relationship. Biden noted that he had once inscribed a photo for Netanyahu with “Bibi I don’t agree with a damn thing you say but I love you.’”

In late 2019, during a question and answer session with voters on the campaign trail, Biden called Netanyahu “counterproductive” and an “extreme right” leader. But he also accused Palestinian leaders of “fomenting” the conflict and “baiting everyone who is Jewish.” And he suggested that some on the U.S. political left give the Palestinian Authority “a pass” when criticizing Israeli leadership.

Netanyahu had a notably better relationship with President Donald Trump, whom he praised for moving the U.S. Embassy to Jerusalem from Tel Aviv and brokering a normalization of relations between Israel and Gulf neighbors Bahrain and the United Arab Emirates as well as Morocco and Sudan.

Biden’s call on Netanyahu to de-escalate the fighting came as political and international pressure mounted on the U.S. president to intervene more forcefully to push for an end to the hostilities. Biden, until Wednesday, had avoided pressing Israel more directly and publicly for a cease-fire, or conveying that level of urgency for ending Israeli airstrikes targeting Hamas in the thickly populated Gaza Strip.

His administration has relied instead on what officials described as “quiet, intensive” diplomacy, including quashing a U.N. Security Council statement that would have addressed a cease-fire. The administration’s handling opened a divide between Biden and some Democratic lawmakers, dozens of whom have called for a cease-fire.

Egypt and some others have worked without success to broker a halt to fighting, while Hamas officials indicated publicly they would keep up their rocket barrages into Israel as long as Israel continued airstrikes.

Netanyahu, in his statement, made clear he had no plans to immediately wind down Israeli strikes targeting Hamas leaders and supply tunnels in Gaza, a 25-mile by 6-mile strip of territory that is home to more than 2 million people.

The White House did not respond directly to Netanyahu’s statement but said top Biden advisers continued to be in “hour by hour” contact with their Israeli counterparts.

Biden’s relationship with Netanyahu could be further complicated for the president by a shifting tide on Israel among some congressional Democrats. Rep. Alexandria Ocasio-Cortez of New York has called Israel an “apartheid state,” and Rep. Ilhan Omar of Minnesota has labeled Israeli airstrikes “terrorism.” Biden, during a visit to a Michigan on Tuesday, had an animated conversation about the ongoing fighting with Rep. Rashida Tlaib, who has family in the West Bank. Tlaib told Biden that his administration must do far more to protect Palestinian lives, according to a person familiar with their conversation,

Soon after Netanyahu announced he planned to continue operations, Reps. Ocasio-Cortez, Tlaib, and Mark Pocan of Wisconsin introduced a resolution opposing the sale of $735 million in military weaponry to Israel that’s already been approved by the Biden administration. Separately, 138 House Democrats on Wednesday signed a letter, organized by Rep. David Price of North Carolina, urging Biden and his administration to “boldly lead and take decisive action to end the violence.”

The fighting, the worst Israeli-Palestinian violence since 2014, has killed at least 219 Palestinians and 12 people in Israel.

Top Biden administration officials have stressed to the Israelis in recent days that time is not on their side as international objections mount to their operations and domestic pressure builds on Biden, according to a person familiar with the ongoing discussions,