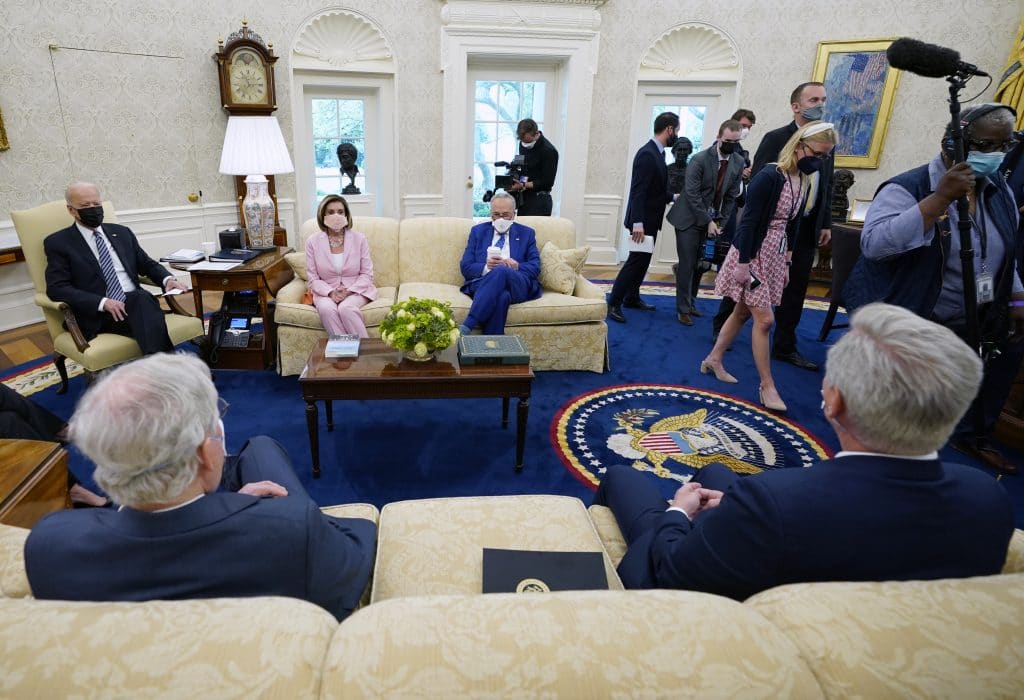 Republican leaders in Congress met with President Joe Biden at the White House on Wednesday, but were unable to come to an agreement to support Biden’s massive infrastructure plan. The GOP wants a much smaller package. The Associated Press has the story:

WASHINGTON (AP) — Despite sharing pleasantries at the White House, Republican congressional leaders signaled no willingness Wednesday to embrace President Joe Biden’s ideas for a massive infrastructure investment, insisting instead on a much smaller package and rejecting the idea of raising taxes on corporations and the wealthy to pay for it.

Biden hosted the top four congressional leaders for the first time and said in the Oval Office session that he was willing to compromise on his $4 trillion jobs and families proposals. After nearly two hours, both sides agreed on the need for public works spending, and they emerged pledging to work together — as much as they can.

But the stark resistance from Republicans to the size and scope of the package, and Senate Republican leader Mitch McConnell’s “red line” against corporate and upper-income tax increases, leaves Democrats in the familiar position of embarking on potentially drawn-out negotiations that may, or may not, produce a bipartisan deal.

“Let’s see if we can get an agreement to kick-start this, and then fight over what’s left,” Biden said later on MSNBC.

While it was the first such meeting of Biden’s presidency, the setting was a familiar White House scene of powerful party leaders, who can make or break an administration’s legislative agenda, formally arrayed around the president. The mood overall was described as not antagonistic, according to a person familiar with the private meeting who spoke on condition of anonymity to discuss it. The last such encounter ended with Pelosi standing to confront then-President Donald Trump.

Schumer told reporters back on Capitol Hill that it was a “good meeting” and that the two sides would “try hard” to work together.

“We said that we would explore the way — the places where we could agree on — and come to a bipartisan agreement on those,” he said. “That’s the first step.”

Republican leaders, however, rejected the way that Biden has stretched the definition of public works beyond traditional roads and bridges to include child care and other so-called human infrastructure. They said they told Biden directly that they will refuse to undo the 2017 tax cuts to pay for it.

“That’s our red line,” McConnell said outside the White House. “We’re interested in trying to get an outcome.”

Biden, who spent decades as a Delaware senator, has long showcased his relationships with Republicans and made his ability to work with the GOP central to his governing philosophy. But a growing number of Democrats believe it is wasted energy, given their view of the GOP as too often obstructionist.

Just days before the meeting, McConnell said “100% of my focus is stopping” the Biden administration, a comment that evoked his pledge early in Barack Obama’s presidency to make the Democrat a one-term president. Obama served two terms.

Balking at the size of Biden’s plan, McConnell has indicated that a proposal of no more than $800 billion, funded by gas taxes and other fees on users, is within reach for Republicans.

Biden said he was encouraged but wants a compromise “without dropping all of the burden on middle-class and working-class people” to pay the fees.

Pelosi said they talked about tapping unpaid taxes, which may total as much as $1.4 trillion and “could pay for a big piece of this.”

The meeting came at a crucial time: House and Senate are laboring through the details of Biden’s proposals, with the Democratic leaders beginning to assess support. There is no room to spare if they decide to go it alone without Republican votes.

“I want to get a bipartisan deal on as much as we can,” Biden said. Then, he suggested he would press ahead “without Republicans, if need be.”

One legislative option aligns with what the president suggested: passing a potentially smaller package of roads, bridges, broadband and other areas of agreement with Republicans, and then Democrats would try to muscle the remaining priorities on their own.

“I’m not going to give up on a whole range of things,” Biden said.

Biden willing to negotiate the size and funding of the package

In recent days, Biden has opened the door to compromise, saying he was willing to negotiate the size and funding of the package. He has suggested lifting the corporate tax rate from 21% to 28% and said any personal income tax increases would not fall on those earning less than $400,000 a year.

But Republicans view the 2017 tax law, which lowered many individual tax rates and dropped the corporate tax rate from 35%, as their signature domestic accomplishment when they held power.

McCarthy said he impressed on the president the need for changing environmental reviews so infrastructure projects can be developed quickly, a potential new point of contention with Democrats.

“There’s an opportunity we can work together,” McCarthy said.

No staff members were in the room for this meeting. That was a change from Biden’s previous sessions with other lawmakers, who had noticed his top aides at times overtly signaling opposition to some Republican ideas.

Still, when Biden and Schumer pushed the importance of electric vehicles, Republicans weren’t very receptive, the person familiar with the meeting said.

White House aides were not surprised by McConnell’s declaration of defiance this week. Public polling suggests that the infrastructure plan, much like the $1.9 trillion COVID-19 relief law enacted in March, is popular with voters, even though the virus aid bill did not receive a single GOP vote.

Biden told the congressional leaders at the top that he ran for office to be a leader for “all Americans,” not just the Democrats and others who voted for him.

According to a White House statement, Biden also emphasized that “the real competition” is not between parties but among the United States and the rest of the world.

Aides said to expect Biden to host more Republicans in the weeks before a soft Memorial Day deadline the White House set for gauging how feasible a bipartisan bill may be.

On Thursday, Biden was scheduled to meet with six Republican senators, including Sen. Shelley Moore Capito of West Virginia, the top Republican on the Senate Environment and Public Works Committee, to hear their plans for a smaller and more narrowly defined package.

The president has hosted a trio of key Democratic senators at the White House already this week, including moderate Democrats Joe Manchin of West Virginia and Kyrsten Sinema of Arizona, the White House needs to keep on board.