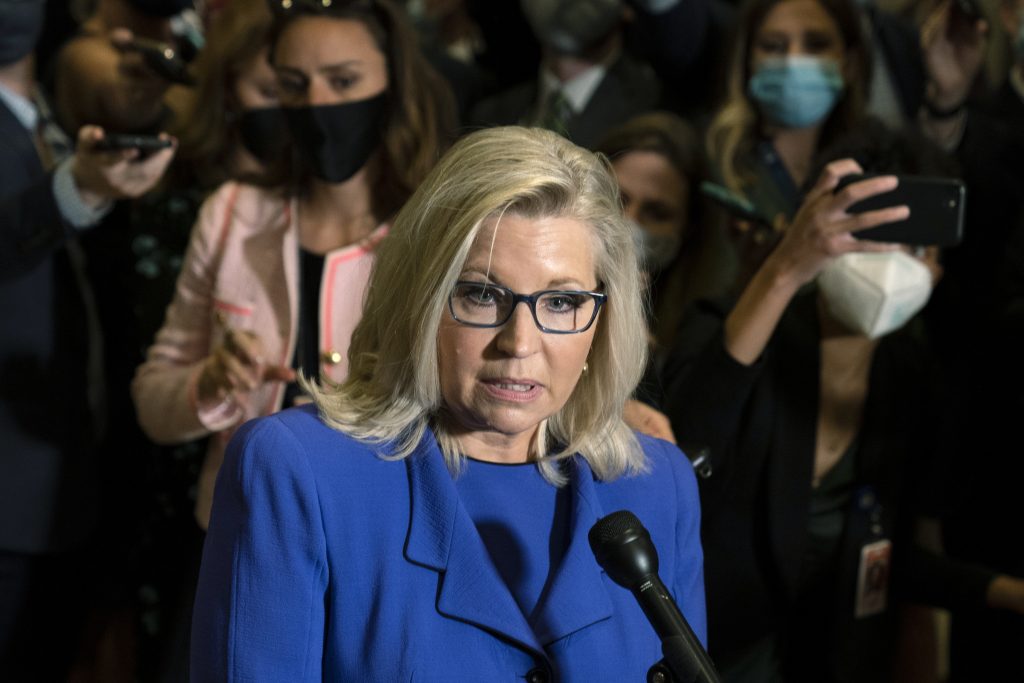 Republicans have vowed to retaliate against prominent Republicans who attacked former President Donald Trump, especially those who voted to impeach him. They followed through with this threat by removing Rep. Liz Cheney from her position as the No. 3 House leader. The Associated Press has the story:

GOP lawmakers remove Rep. Liz Cheney from No. 3 position in House for her betrayal of Donald Trump

She defiantly insisted she’ll keep trying to wrench the party away from him and his “destructive lies.”

Meeting behind closed doors, GOP lawmakers needed less than 20 minutes and a voice vote to oust the Wyoming congresswoman from her job as their No. 3 House leader. The banishment, urged by Trump and other top Republicans, showed his ability to upend the careers of antagonists, even those from GOP royalty.

Cheney, daughter of former Vice President Dick Cheney, has repeatedly rebuked Trump for his oft-repeated falsehood that his 2020 reelection was fraudulently stolen from him and for his encouragement of supporters who assaulted the Capitol on Jan. 6. On Wednesday she unrepentantly lashed out anew.

“If you want leaders who will enable and spread his destructive lies, I’m not your person,” she told her colleagues before the vote, according to a person who provided her remarks on condition of anonymity. “You have plenty of others to choose from. That will be their legacy.”

Just minutes after she accused her fellow Republicans of dishonestly buttressing Trump, House Minority Leader Kevin McCarthy, R-Calif., told reporters at the White House, “I don’t think anybody is questioning the legitimacy of the presidential election. I think that is all over with.”

McCarthy spoke a week after Trump released a statement saying, “The Fraudulent Presidential Election of 2020 will be, from this day forth, known as THE BIG LIE!”

Cheney’s critics say her offense wasn’t her view of Trump but her persistence in publicly expressing it, undermining the unity they want party leaders to display in advance of next year’s elections, when they hope to win House control. Several also say GOP voters’ allegiance to Trump means the party’s electoral prospects without him would be dismal.

Cheney’s ouster effectively means the GOP is setting a remarkable requirement for admission to its highest ranks: adherence to, or at least silence about, Trump’s fallacious claim about widespread voting fraud. In states around the country, officials and judges of both parties found no evidence to support his assertions.

Cheney, 54, would seem to have an uphill climb in her quest to redirect the GOP away from Trump.

She’s told Republicans she’s not quitting Congress and will run for reelection next year, but she will have to survive a near-certain GOP primary challenge from a Trump-recruited opponent. Even if she returns to the House, it is unclear how loud her voice will be inside a party that has all but disowned her.

And though she has establishment lineage and embraces classical GOP conservative stances, it almost seems the party has evolved out from under her.

Polls show Trump’s hold is deep and wide on the party’s voters. And many of the time-tested conservative views she and her father share — including a belief in assertively projecting U.S. military force abroad — have lost ground to Trump’s inward-focused America First agenda.

Even so, Cheney showed no signs of being bashful about her mission.

Outside the GOP meeting, she told reporters that the country needs a Republican Party “that is based upon fundamental principles of conservatism, and I am committed and dedicated to ensuring that that’s how this party goes forward, and I plan to lead the fight to do that.”

She added, “I will do everything I can to ensure that the former president never again gets anywhere near the Oval Office.”

Wednesday’s voice vote by House Republicans means there is no precise way to measure how much support Cheney would have had, though only a handful of GOP colleagues have spoken out on her behalf.

“What happened today was sad,” said Rep. Adam Kinzinger, R-Ill., another Trump critic and one of the few Republicans who have publicly defended her. “Liz committed the only sin of being consistent and telling the truth. The truth is that the election was not stolen.”

And Trump himself took a sharp-elbowed victory lap, saying, “Liz Cheney is a bitter, horrible human being. I watched her yesterday and realized how bad she is for the Republican Party. She has no personality or anything good having to do with politics or our Country.”

As if to underscore Jordan’s contention, House Speaker Nancy Pelosi, D-Calif., said, “Congresswoman Liz Cheney is a leader of great courage, patriotism and integrity. Today, House Republicans declared that those values are unwelcome in the Republican Party.”

Participants said Cheney received a polite standing ovation after her remarks inside Wednesday’s meeting. Then she had to endure what Rep. Byron Donalds of Florida said was a “deafening” voice vote to topple her.

Her replacement in the party’s House leadership is expected to be Rep. Elise Stefanik of upstate New York, who entered the House in 2015 at age 30, then the youngest woman ever elected to Congress.

Stefanik owns a more moderate voting record than Cheney but has evolved into a vigorous Trump defender who’s echoed some of his claims about widespread election cheating.

Some of Washington’s hardest-right conservatives have remained wary of Stefanik’s moderate record, but no challenger has emerged. Rep. Ken Buck, R-Colo., said the vote on replacing Cheney will occur Friday.

Cheney arrived in Congress in 2017, and by November 2018 was elected to her leadership job unopposed. Her career path seemed to potentially include runs at becoming speaker, senator or even president.

She occasionally clashed with Trump during his presidency over issues like the U.S. withdrawal from Syria. But virtually open warfare between the two commenced in January once she became one of 10 House Republicans to back his second impeachment for inciting his supporters’ deadly Capitol assault. The Senate acquitted him.

Cheney withstood a February effort to boot her from leadership in a 145-61 secret ballot, with a McCarthy speech on her behalf credited with saving her. That didn’t happen this time.

Previous Article
Judge’s ruling means Chauvin could get longer sentence
Next Article
Prices are increasing — is inflation a real threat?