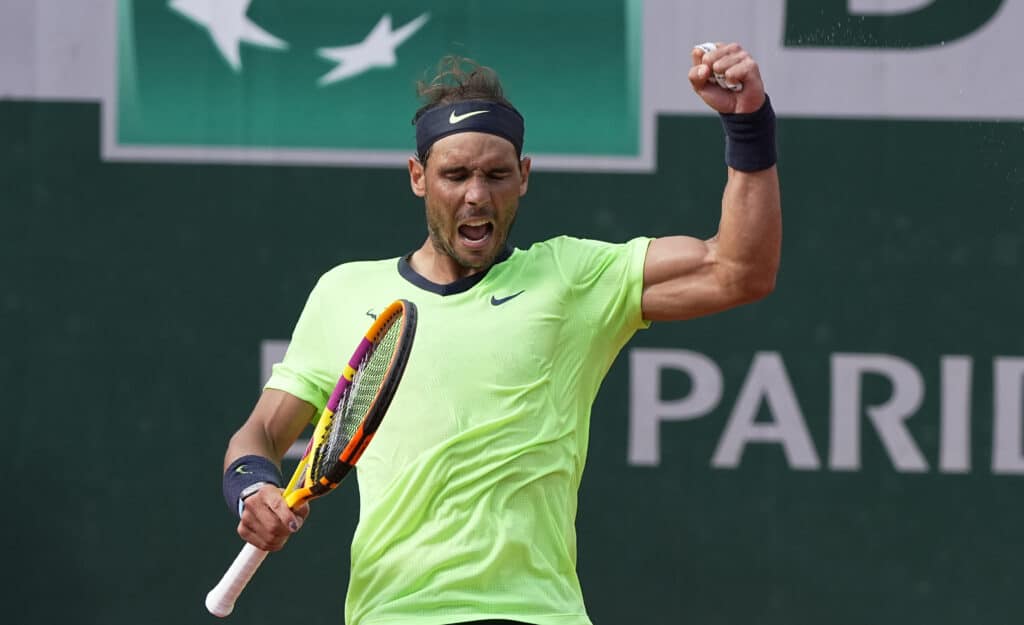 PARIS (AP) — Iga Swiatek closed out her latest French Open victory and raised a triumphant right fist. Rafael Nadal won less than half an hour later and celebrated with a left uppercut.

The two defending champions make for a potent one-two combination at Roland Garros, where both won going away Saturday to reach the fourth round.

Swiatek rallied from a break down in the opening set to beat Anett Kontaveit 7-6 (4), 6-0. Nadal was unfazed at losing serve twice in a row in the second set and eliminated Cameron Norrie 6-3, 6-3, 6-3.

Nadal, 35, advanced to the round of 16 at a Grand Slam for the 50th time. He’s trying to add to his record 13 French Open crowns and seeks his 21st major title, which would break the men’s record he shares with Roger Federer.

As Nadal spoke to the crowd after his match, fans reminded the Spaniard of his title total by shouting “treize!” — 13 in French.

“Can you repeat that?” he responded in English with a smile.

Nadal will next play 19-year-old Italian Jannik Sinner, who is seeded 18th.

“He’s young, he’s improving every week, he has big shots,” Nadal said. “I need to be solid. I need to be aggressive too. I need to make him play from tough positions. It’s the fourth round — you can’t expect an easy opponent.”

Nadal knows that from experience. Federer and Novak Djokovic are the only other men to reach the fourth round at 50 major events.

Swiatek, 20, has won 20 consecutive sets at Roland Garros and that streak was in jeopardy when she trailed Kontaveit 4-2. The title holder dominated from there and lost only 12 points in the second set.

“It’s good to have matches like that, because it keeps you down to earth, and you have to be careful on every point,” Swiatek said. “I’m just happy that I’m able to play really solid in really important moments.”

The eighth-seeded pride of Poland next faces 18-year-old Ukrainian Marta Kostyuk, who has reached the round of 16 at a major event for the first time.

Related: Roger Federer pulls out of French open after round 3

Sofia Kenin advanced to the fourth round for the third consecutive year by winning a seesaw all-American match against Jessica Pegula, 4-6, 6-1, 6-4. Kenin is the highest-seeded player left in the women’s draw at No. 4, and she has shaken a slump with her return to Roland Garros, where she was the runner-up to Swiatek in October.

“This whole year hasn’t been so great in terms of my tennis,” Kenin said. “I’ve had some early round exits. I’m just happy that I’m finally finding my rhythm and playing some good tennis again.”

Another teen, 17-year-old American Coco Gauff, advanced to the fourth round in Paris for the first time. She led 6-1 when her opponent, Jennifer Brady, stopped playing due to a left foot injury.

Gauff next faces No. 25 Ons Jabeur with a shot at her first berth in a major quarterfinal.

“When I first came on tour I felt like I had pressure to win,” Gauff said. “I realized I’ve just got to be myself and have fun on the court, and I will say, I’m having fun even in the pressure moments.”

Kenin blew a 3-0 lead in the opening set against the No. 28-seeded Pegula, but then began stepping into the court to take charge of rallies, especially with a backhand that produced two dozen winners. She hit 48 winners overall to 18 for Pegula.

Kenin had 10 double faults and was broken five times but held her final four service games to close out the win. The 2020 Australian Open champion, who was sidelined by an appendectomy in February, improved to 10-8 this year.

“I’m happy it’s clicking during the French Open,” the 22-year-old Kenin said. “I love the court, I love the clay. It’s a good surface for me. My game is not where it was at the Australian Open in 2020 but we’re getting there.”

American Sloane Stephens, who is ranked 59th and out of the top 50 for the first time since 2017, advanced by beating 18th-seeded Karolina Muchova 6-3, 7-5. Stephens, the runner-up in 2018, will next face Barbora Krejcikova, who upset fifth-seeded Elina Svitolina 6-3, 6-2.

Djokovic advanced to the round of 16 at the French Open for the 12th consecutive year and said he made necessary adjustments on a cool, cloudy afternoon.

“Maybe for those watching it looked simple, but it wasn’t,” he told the crowd in French. “The conditions were different. How do you say in French … the bounce was lower. I think I coped well.”

Djokovic next faces Musetti, who is playing in his first Grand Slam event.

“He is a big challenge to me,” Djokovic said. “He will not have much to lose. I’m sure he’s going to come trying to play the tennis of his life.”

Jan-Lennard Struff, a 31-year-old German, matched his best Grand Slam effort by advancing to the fourth round when he beat 18-year-old qualifier Carlos Alcaraz 6-4, 7-6 (3), 6-2.