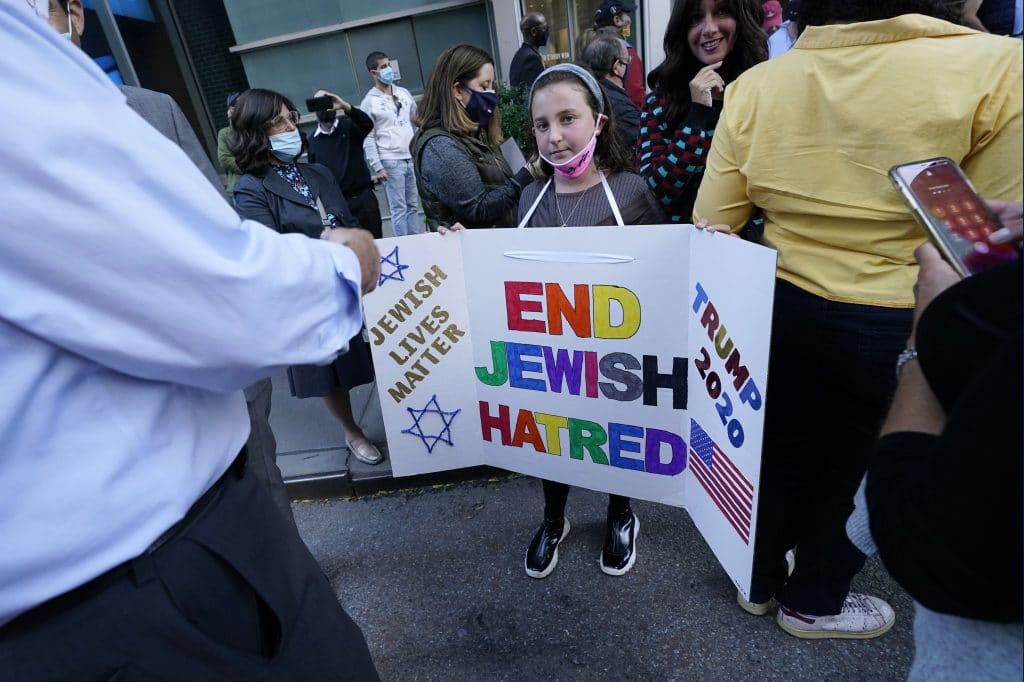 The Pew Research Center has conducted a comprehensive survey of the views of Jewish Americans on issues from antisemitism to religion to cultural heritage. Perhaps surprisingly, only one-third said the Israeli government is sincere in seeking peace. The Associated Press has the story:

(AP) A comprehensive new survey of Jewish Americans finds them increasingly worried about antisemitism, proud of their cultural heritage and sharply divided about the importance of religious observance in their lives.

The survey, released Tuesday by the Pew Research Center, estimated the total Jewish population in the country at 7.5 million — about 2.3% of the national population.

The survey of 4,178 Jewish Americans was conducted between November 2019 and June 2020 — long before the current escalation of the Israeli-Palestinian conflict. However, the findings reflected skepticism among U.S. Jews regarding that conflict — only one-third said the Israeli government was sincere in seeking peace; just 12% said Palestinian leaders were sincere in that regard.

Compared with Americans overall, Jewish Americans, on average, are older, have higher levels of education and income and are more geographically concentrated in the Northeast, according to Pew.

Yet even as the Jewish population is thriving in many ways, concerns about antisemitism rose amid the deadly attacks in 2018 and 2019 on the Tree of Life synagogue in Pittsburgh; the Chabad of Poway synagogue in Poway, California; and a kosher grocery store in Jersey City, New Jersey..

Three-quarters of Jewish Americans say there is more antisemitism in the U.S. than five years ago, and 53% say they feel less safe. Jews who wear distinctive religious attire such as head coverings are particularly likely to feel less safe.

The impact of such worries on people’s behavior seems limited: Pew reported that the vast majority of American Jews — including those who feel less safe — say concern about antisemitism hasn’t deterred them from participating in Jewish observances and events.

Rabbi Rick Jacobs, president of the Union of Reform Judaism, said American Jews believe they are being singled out for attacks and vitriol, yet also see antisemitism as part of a broader national problem of bigotry and intolerance.

“We have to get a lid on the tolerance of intolerance in the United States,” he told The Associated Press. “Hatred and bigotry existed before five or six years ago, but in recent years it has become OK to do it in a very public, unrestrained way.”

According to Pew’s criteria, Jews are notably less religious than American adults as a whole. For example, 21% said religion is very important in their lives, compared with 41% of U.S. adults overall. A majority of U.S. adults say they believe in God “as described in the Bible,” compared with 26% of Jews. And 12% of Jewish Americans say they attend religious services at least weekly, versus 27% of the general public.

Orthodox Jews stand apart in this regard. They are among the most religious groups in U.S. society in terms of the share — 86% — who say religion is very important in their lives, compared with 78% of Black Protestants and 76% of white evangelicals.

According to Pew, 9% of U.S. Jews describe themselves as Orthodox. Far more belong to the two long-dominant branches of American Judaism: 37% identify as Reform and 17% as Conservative. More than one in four don’t identify with any particular branch yet consider themselves to be Jewish ethnically, culturally or by family background.

Interfaith marriage is commonplace: 42% of married Jewish adults said they had a non-Jewish spouse, according to Pew.

Jacobs said he wants Reform congregations to embrace this phenomenon rather than view it as a sign of demise.

“Intermarriage can expand who’s part of the Jewish community,” he said. “You see Black, brown, Asian families choosing to be a part of Jewish life.”

Pew found evidence that the U.S. Jewish population is becoming more racially and ethnically diverse. Overall, 92% of Jewish adults identify as non-Hispanic white, and 8% identify with all other categories combined. But among Jews ages 18 to 29, that figure rises to 15%.

Politically, U.S. Jews on the whole tend to support the Democratic Party. In the survey, which was conducted months before the 2020 election, 71% said they were Democrats or leaned Democratic.

But Orthodox Jews have moved in the opposite direction: 75% of them said they were Republicans or leaned Republican, compared with 57% in 2013. And 86% of them rated Donald Trump’s handling of policy toward Israel as “excellent” or “good,” while a majority of all U.S. Jews described it as “only fair” or “poor.”

80% feel sense of belonging to the Jewish people

While there are signs of political polarization among U.S. Jews, the survey also found areas of consensus. For instance, more than 80% say they feel at least some sense of belonging to the Jewish people, and three-quarters say “being Jewish” is very or somewhat important to them.

Pew asked respondents which of various causes and activities are “essential,” “important but not essential” or “not important” to what being Jewish means to them. More than 70% said remembering the Holocaust and leading a moral and ethical life are essential, and 59% cited working for social justice.

Rabbi Noah Farkas of Valley Beth Shalom, a Conservative synagogue in Encino, California, said he hopes Jewish Americans can maintain solidarity even as their ranks diversify and many forego religious observance.

“It is our imperative to find ways to be nimble and compelling enough for the Jews to want to invest their time and resources in the broader community,” he said via email. “So the struggle for me is not the identity, but the practice of Jewish life and how we hold a community together when others are trying to tear us apart.”

Rabbi Motti Seligson, media director of the Hasidic organization Chabad-Lubavitch, expressed pride and optimism as the ranks of young Orthodox Jews remain robust. Yet he commended other young adults who don’t identify as religious but still embrace Jewish culture and traditions.

“They are eschewing the old construct of denominational affiliation and choosing a Jewish lifestyle that is uniquely their own yet ultimately connected to their people and heritage,” he said.

Pew’s survey was conducted online and by mail; the margin of error for questions posed to all respondents was plus or minus 3 percentage points.