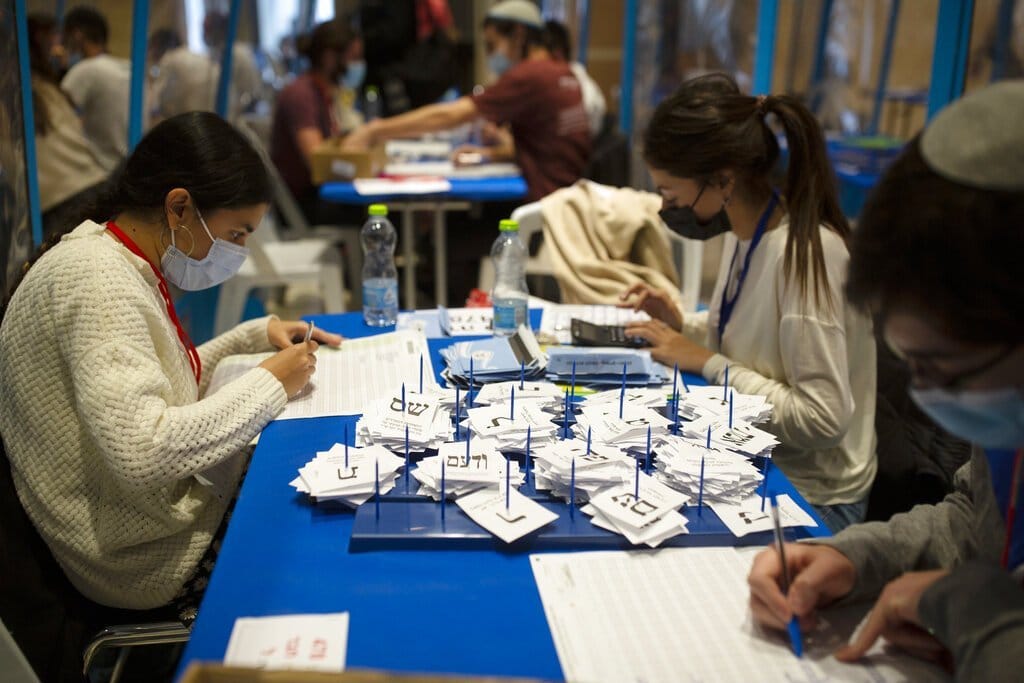 With votes almost completely counted, it appears Israeli Prime Minister Netanyahu and his allies were unable to achieve a parliamentary majority. For now, he remains in office without a clear path to staying in power. The Associated Press covered the story:

Netanyahu and allies fall short of a parliamentary majority

JERUSALEM (AP) — Prime Minister Benjamin Netanyahu’s prospects for victory in Israel’s latest election appeared to move out of reach on Thursday, as the nearly-complete vote count showed him and his right-wing allies falling short of a parliamentary majority.

With 99.5% of the votes counted, Israel’s election commission showed both Netanyahu’s allies and those determined to topple him without a clear path to forming a government. The remaining uncounted votes were unlikely to change the results.

Tuesday’s vote, Israel’s fourth parliamentary elections in two years, was widely seen as a referendum on Netanyahu’s fitness to rule while under indictment. But neither the pro-Netanyahu camp nor his highly fragmented opponents gained 61 of the required 120 seats in parliament.

Netanyahu and his allies had a projected 52 seats compared to 57 held by his opponents. In the middle are two undecided parties: Yamina, a seven-seat nationalist party headed by a former Netanyahu lieutenant, and Raam, an Arab Islamist party that won four seats. Neither Naftali Bennett of Yamina nor Mansour Abbas of Raam has committed to either camp.

Difficult for either side to build a coalition

Deep divisions between the various parties will make it difficult for either side to gain a majority.

Arab parties have never joined a governing coalition, and for nationalist parties, such an alliance is anathema. Bezalel Smotrich, a Netanyahu ally and head of the far-right Religious Zionist party, said Thursday that “a right-wing government will not be established with support from Abbas. Period. Not on my watch.”

Gideon Saar, a defector from Netanyahu’s Likud who now heads a six-seat party committed to ousting him, said “it is clear that Netanyahu does not have a majority to form a government under his leadership. Action must now be taken to realize the possibility of forming a government for change.”

The Likud, which won the most seats of any party, fired back, saying such a bloc would be anti-democratic. It compared Netanyahu’s opponents to the clerical leadership in Israel’s arch-enemy Iran, which vets candidates for high office.

Yohanan Plesner, president of the Israel Democracy Institute, said that the stalemate is Israel’s “worst political crisis in decades.”

“It’s apparent that our political system finds it very difficult to produce a decisive outcome,” Plesner said. He added that inherent weaknesses in Israel’s electoral system are compounded by “the Netanyahu factor”: a popular prime minister struggling to stay in power while under indictment. “Israelis are split right down the middle on this question.”

Several of Netanyahu’s opponents have started discussing advancement of a bill to disqualify a politician under indictment from being tasked with forming a government, a measure aimed at barring the long-serving prime minister from office. A similar bill was floated after the March 2020 elections, but was never passed.

Netanyahu is on trial for fraud, breach of trust and accepting bribes in three cases. He has denied any wrongdoing and has dismissed the charges as a witch-hunt by a biased law enforcement and media.

Despite the charges against him, Netanyahu’s Likud party received around a quarter of the votes, making it the largest party in parliament. A total of 13 parties received enough votes to enter the Knesset — the most since the 2003 election — and represent a variety of ultra-Orthodox, Arab, secular, nationalist, and liberal factions.

A final tally of the votes was expected to be completed by Friday.