Killer caught in South Carolina after week on the run 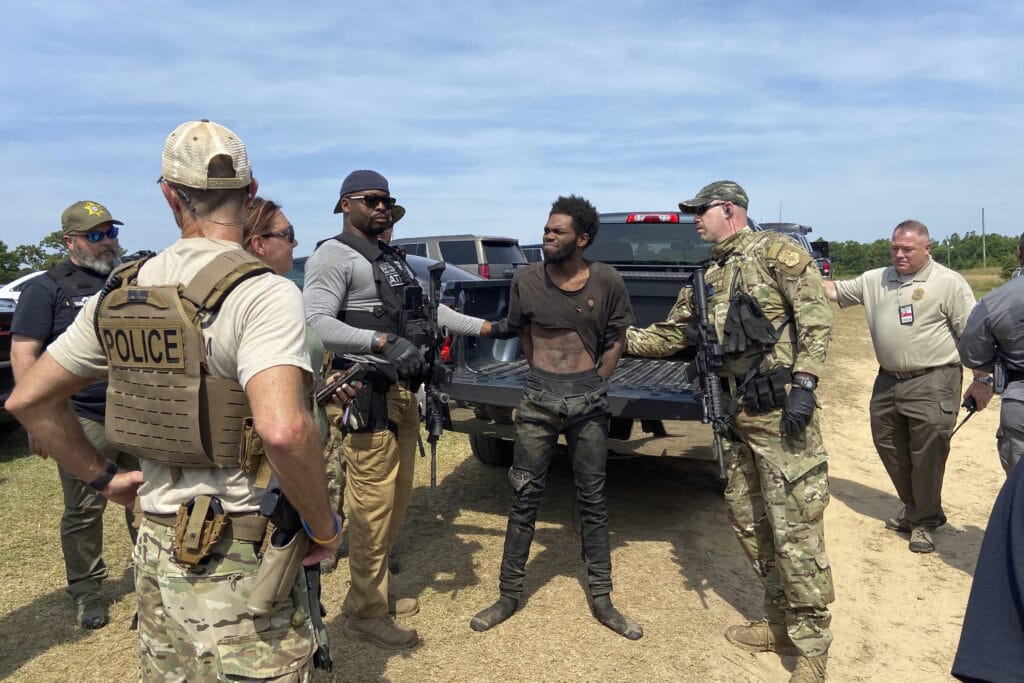 Tyler Terry, wanted for the killings of four people, was caught in South Carolina after a week of searching for him. He allegedly killed people during robberies and was accompanied at one point by the estranged wife of another man he killed. The Associated Press has the story:

COLUMBIA, S.C. (AP) — A weeklong manhunt for a suspect wanted in the killings of four people ended without another shot fired Monday morning as hundreds of officers surrounded him in South Carolina, authorities said.

Neither Tyler Terry nor the more than 300 officers searching for him were hurt during his arrest, the Chester County Sheriff’s Office posted on Twitter. The manhunt finally ended after at least three confirmed sightings of Terry since he ran from a wrecked car after firing on Chester County deputies on May 17.

Deputies released photos of Terry’s arrest showing an officer giving him a bottle of sports drink as he sat on a pickup tailgate with his hands cuffed behind him. Terry was wearing dirty pants, socks with no shoes and a T-shirt ripped nearly in half.

Investigators didn’t think Terry was getting help from anyone but broke into vehicles — or possibly barns and sheds — and lived off the land. He managed to steal a gun, water, shirt and shoes from an unlocked work truck last week, authorities said.

Terry apparently spent the week in the same small area, eluding dozens of officers who methodically shrunk where they searched and staying out of sight of helicopters that were overhead most of the time, Chester County Sheriff Max Dorsey said.

Terry was hiding in weeds when a team of federal agents spotted him. He had a gun nearby but was grabbed before he could react, Dorsey said.

“He was certainly ready to run. But he was surrounded,” Dorsey said at a Monday news conference.

Terry, 26, is charged with murder in a shooting in York in early May, the killing in Great Falls of the estranged husband of the woman who drove the car as he fired at officers, and the deaths of two other people in Missouri on May 15 during robberies in the St. Louis suburbs, authorities said. Arrest warrants list Terry’s address as Great Falls.

Sunday afternoon, deputies spotted Terry wearing no shoes and all black clothing crossing a highway. Dorsey said the search paused overnight because authorities were sure Terry was in their perimeter and they didn’t want an encounter in the dark with a possibly armed man that the sheriff said was “extremely fast and agile.”

When the sun rose Monday, the push to find Terry began again and was successful.

Related: What The UFO Report Will Tell Us This Month

“He was tired, thirsty,” Dorsey said. “He’s all cut up. He’s got bug bites. His clothes are torn. He’s exhausted.”

The search grew from about 100 officers last week to 300 officers Monday. The seven-day manhunt in the same area for a suspect is one of the longest in recent memory in South Carolina.

“He’s been homeless for some time and may have spent long periods of time living in the woods. I’m not saying he is Superman, but that could help explain some things,” Chester County Sheriff’s Office spokesperson Grant Suskin said,

The woman driving Terry was arrested after wrecking the car. Adrienne Simpson, 34, is charged along with Terry with killing Eugene Simpson, from whom she had been separated for several years. An arrest warrant said she confessed that both she and Terry shot the father of her children, and that she helped dump his body in a ditch.

Simpson, who had a black eye in her booking photo, was the victim when Terry was arrested on a first-degree criminal domestic violence charge a year ago. Terry hit his girlfriend so hard that she lost hearing in one ear and an eye swelled shut, according to an arrest warrant from Chester.

Police in Myrtle Beach also charged Terry with domestic violence after he hurt Simpson’s hand and broke her phone in a March 31 argument, according to a police report.

Simpson’s mother, who said she spoke with her after her arrest, said Terry was physically and mentally abusive and her daughter was scared of him but also loved him and thought he would change. The couple was together in Missouri and investigators are retracing their route as they traveled there from South Carolina to see if any other crimes were committed.

“I pray that he comes out alive so he can face justice. And I pray Adrienne is cooperating with law enforcement. Which I know she will serve serious time for her part in it. But she don’t need to take the fall for all of it,” Carol DeWitt told WBTV-TV in Charlotte, North Carolina.