Priest struggles to give comfort in flood-hit German town 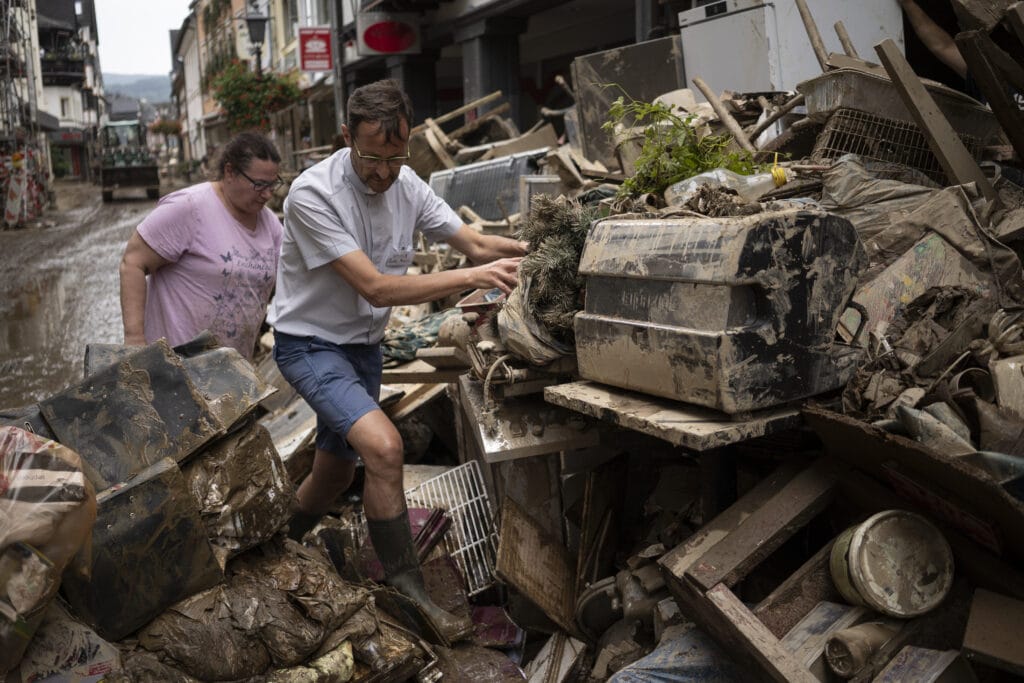 A clergyman in Germany is out walking the streets offering comfort and help to residents through the devastation caused by flooding. Nearly 200 people were killed in the flash flood, and that number is expected to rise as clean up continues. The Associated Press has the story:

The realization set in that those missing will never return

AHRWEILER, Germany (AP) — The Rev. Joerg Meyrer steels himself before making his way through the stinking piles of mud-caked debris that permeate this once-beautiful town in Germany’s wine-growing Ahr valley.

For the past five days, the 58-year-old Catholic priest has pulled on his galoshes and walked the streets to try to give comfort to his parishioners as they get on with the grim task of cleaning up what was destroyed by Wednesday’s flash flood — and recovering the bodies of those who perished in it.

“It came over us like a tsunami,” Priest Meyrer recalls. “Bridges, houses, apartments, utility pipes — everything that actually constitutes this town, what it lives on, has been gone since that night.”

Residents of Ahrweiler had been told to expect the Ahr River, a tributary of the Rhine, to crest at 7 meters (nearly 23 feet), but Meyrer said few comprehended what that would mean. The last serious flood in the area south of Bonn was more than a century ago.

Nearly 200 people were killed when heavy rainfall turned streams into raging torrents across parts of western Germany and Belgium, and officials put the death toll in Ahrweiler county alone at 110, making it the hardest hit region.

Meyrer, who expects that figure to rise significantly, said the victims came from all walks of life.

Townspeople recounted grim cases of delayed grief, as the realization began to sink in that those reported missing would not return.

Priest Meyrer said he was called in when firefighters found the body of a woman he had known well.

“The husband knew his wife had been in the basement and he had to wait two days for her to be recovered,” he said.

For now, many residents are focusing on the cleanup before dealing with the longer task of rebuilding.

“We need to start over,” said Paddy Amanatidis, the owner of La Perla pizzeria, as she took a break from cleaning the rubble out of the restaurant.

“We fought our way through (the coronavirus pandemic) and the flood won’t get us down either,” she said, adding that the solidarity shown by neighbors and friends had helped to boost spirits.

Meyrer believes that even for those lucky enough not to have lost loved ones, the enormous impact of the disaster has not fully hit them.

“When the first lot (of debris) has been cleared and people have nothing to do, then I think many will understand for the first time what they’ve lost and what that means,” he said.

German officials have rejected allegations that they failed to properly warn people of the severity of the floods, but conceded that more lessons can be learned from the disaster. Experts say global warming may make such floods even more frequent.

Upriver in the village of Schuld, which was largely destroyed, Mayor Helmut Lussi said the scars would last a long time. “Our lives changed from one day to the next,” he told German Chancellor Merkel, who visited on Sunday.

As for mourning the victims, Priest Meyrer says that daunting task will require the help of clergy from across the town and beyond.

Aside from the sheer number of dead, authorities also must figure out where to bury them, because the local cemetery, too, was flooded, with hardly any tombstone left standing.

While the freshly renovated Gothic walls of the 13th century St. Lawrence Church remained miraculously untouched by the flooding, Meyrer plans to keep walking the streets for now, offering a helping hand, a sympathetic ear and a shoulder to cry on.

But even he is struggling, saying that prayer hasn’t come easily in the days since the disaster struck.

“In the evening I try to say, ‘Lord, somehow you have to take over now.’ That’s got to be good enough,” he added.

By FRANK JORDANS and BRAM JANSSEN