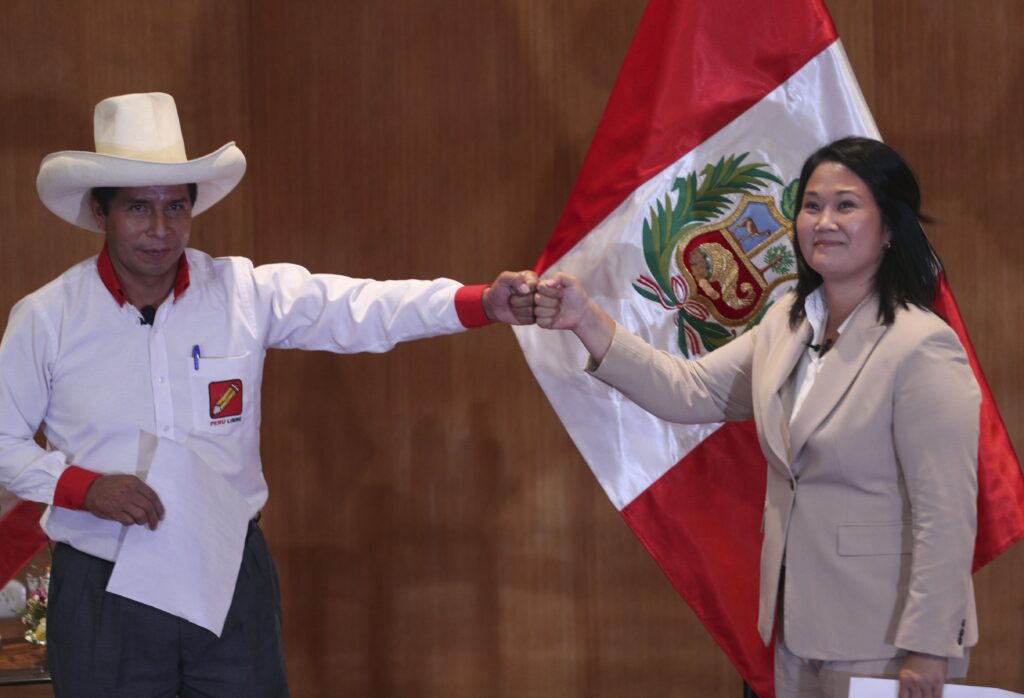 Peru elects a new president Sunday, and the two rival candidates, who are vastly different, are tied in the polls. Keiko Fujimori is the daughter of a jailed former president, and Pedro Castillo is a political novice who wants to nationalize key sectors of the economy. The Associated Press has the story:

Keiko Fujimori faces off against Pedro Castillo for president of Peru

LIMA, Peru (AP) — Amid an unrelenting coronavirus pandemic that has overwhelmed cemeteries, Peruvian voters will choose Sunday between a political novice who has scared business by promising to overhaul the key mining industry and a career politician whose father is a former president jailed for corruption and human rights violations.

The polarizing runoff election between rural teacher Pedro Castillo and Keiko Fujimori, making her third run for the presidency, comes on the heels of the Peruvian government’s admission that the death toll of the pandemic is at least 2.5 times higher than previously acknowledged. The jump brings the estimated death toll to more than 180,000 in a country with about one-tenth the population of the United States.

Polls have shown the two candidates virtually tied heading into Sunday’s runoff. In the first round of voting, featuring 18 candidates, neither received more than 20% support and both are strongly opposed by sectors of Peruvian society, leading some to label the choice as between the lesser of two evils.

While Castillo’s stance on nationalizing key sectors of the economy has softened, he remains committed to rewriting the constitution that was approved under the regime of Fujimori’s father and his rivals have compared his leftist policies to those of late Venezuelan President Hugo Chavez.

Fujimori, a conservative former congresswoman, has been imprisoned as part of a graft investigation though she was later released. Her father, former President Alberto Fujimori, governed between 1990 and 2000 and is serving a 25-year sentence for corruption and the killings of 25 people. She has promised to free him should she win.

“She is the daughter of a corrupt man who supports everything bad that her father did,” said homemaker Mirian Ortiz during a protest against Fujimori in the capital of Lima. Some protesters shouted “Fujimori never again” and others carried portraits of people who disappeared during Alberto Fujimori’s government.

The challenges awaiting whoever takes office July 28 cannot be overestimated.

Among Latin American countries, only Brazil and Mexico have reported higher death tolls from COVID-19 and both have much larger populations. Peru’s vaccination campaign has seen meager progress, and the pandemic has already pushed 3 million more people into poverty.

The winner will also face a divided Congress that likely will make it difficult to pass legislation and may not even allow him or her to finish their term in office. In November, Peru had three presidents in a single week after one was impeached by Congress over corruption allegations and protests forced his successor to resign.

“Both candidates are certainly not suitable, considering the challenges the country will face,” said Claudia Navas, an analyst with the global firm Control Risks.

“We will not see a light at the end of the tunnel with regards to the management of the pandemic or the complex political environment because they will have several things against them, starting with a fragmented Congress. Fujimori will face opposition on the streets, Castillo will face opposition from the (country’s) institutions. I mean, they will be quite alone,” Navas said.

Few expected Castillo to make it this far. The son of illiterate peasants, he went on to complete a degree in educational psychology at Peru’s César Vallejo University. He still lives in the country’s third-poorest district, deep in the Andes, and until recently was a rural schoolteacher. He entered politics by leading a teachers strike.

While Fujimori’s father was a political outsider when he won office, she grew up in the halls of power. She attended Boston University and got a master’s from Columbia University in the United States. She later served as first lady during her father’s last six years in office.

Peru is the second largest copper exporter in the world and mining accounts for almost 10% of its GDP and 60% of its exports, so Castillo’s initial proposal to nationalize the nation’s mining industry set off alarm bells.

Castillo backed away from nationalizing

But after advancing to the runoff, Castillo moved away from his nationalization proposal and recently has pitched renegotiating contracts with mining companies.

Fujimori, in turn, has promised an “additional contribution” from the mining sector to finance irrigation and reservoirs in rural communities where it operates. She has also pledged to distribute 40% of a tax on mining, oil and gas extraction among poor families in those areas.

Meanwhile, Castillo said he will collect the largest state debts held by powerful groups in the mining, financial, telecommunications and airline industries. The 158 largest debts total more than $2.4 billion, according to government data.

Both have promised COVID-19 vaccines for all Peruvians.

The country has tallied more than 1.9 million coronavirus cases and has only fully vaccinated about 3.7% of its 32.5 million residents, according to data from the Johns Hopkins University.

So many people have died since the pandemic began that some have been buried in clandestine graves in areas surrounding cemeteries that have run out of space. People’s anger over the government’s mismanagement of the pandemic only heightened when an official document revealed that hundreds of wealthy and well-connected individuals, including a former president, were secretly vaccinated.

Noam Lupu, associate director of the Latin American Public Opinion Project at Vanderbilt University, said the lack of stable coalitions for the winner may result in the new president trying to govern alone, testing the powers of the presidency, while the threat of impeachment may push him or her to undermine the country’s institutions to be able to remain in office.

“I think there’s a lot of concern about the sort of ideological extremism of the two candidates,” Lupu said. “Obviously, Keiko Fujimori is the daughter of the former dictator, so, there’s a concern about her commitment to democracy and the corruption scandals surrounding her. And on the other side, Pedro Castillo is quite unknown to a lot of people, we don’t know a lot about him, but his statements are certainly far to the left ideologically and also not reassuring in terms of commitment to democracy. Again, it’s not clear who is the bigger threat.”