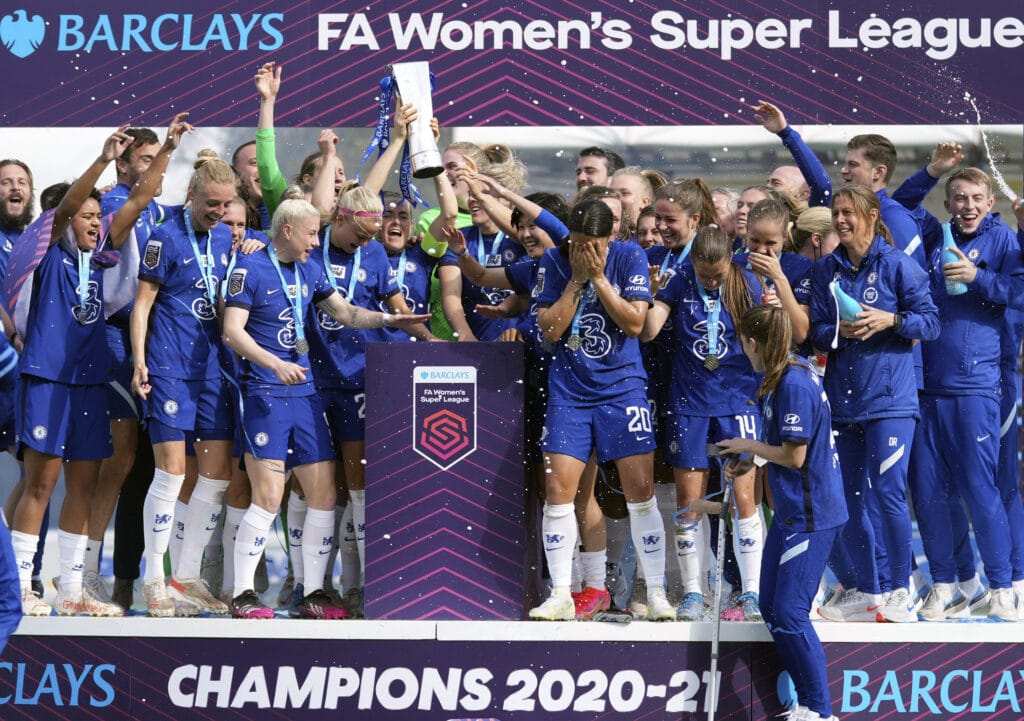 The FIFA Benchmarking Report surveyed 30 leagues and 282 clubs in women’s soccer internationally and found 70% operate at a loss. The few that make money get much of it from sponsors. The Associated Press has the story:

Just 13% of clubs generate revenue over $1 million, and more than half of those revenues come from sponsorship deals, according to FIFA data released Wednesday. Soccer’s global governing body surveyed 30 leagues and 282 clubs for the FIFA Benchmarking Report, which seeks to identify how to best grow the women’s game.

The report focuses on governance, finance, fan engagement, players, on-field issues and some of the impacts of the coronavirus pandemic. It builds on FIFA’s Global Women’s Football Strategy released in 2018.

“Women’s football is the single biggest growth opportunity for football today. And to meet these conversations, it’s really important that we have data, we have facts, we have analysis on the financial, the commercial context, the governance structures, on all the aspects of the professional football ecosystem,” said Sarai Bareman, FIFA’s chief women’s football officer.

Some of the survey’s findings were unsurprising. Players on championship teams were paid better than other teams in 73% of the leagues surveyed. Better facilities translated to better performance, with 50% of the teams that had the most facilities winning a league title in the past five years.

Clubs in Japan and China average more than $1 million in revenue, while the average in England is $996,000. The National Women’s Soccer League in the United States declined to share financial data, which was self-reported by the clubs surveyed.

While based on the 2018-19 season, the report did include some data related to COVID-19. The FIFA financial relief plan has aided 70% of the leagues and 58% of the clubs surveyed. Under a quarter of teams expect no financial fallout from the pandemic, while 76% expect varying degrees of impact.

Bareman said the aim is to conduct the survey annually, so the impact of the pandemic on women’s soccer could be more completely explored.

“Anecdotally, 100%, we’ve seen evidence that there has been further impacts of COVID-19 on both leagues and clubs. And we’re simply seeing that through things such as competitions having to be canceled, to be postponed, in some cases, unfortunately, resources having to be cut back, that there will be impacts. And I think what’s important for us is that next report,” Bareman said.

She noted that when FIFA released its global strategy, it aimed for each of the 211 member associations to adopt similar long-term strategies to grow the game. Now FIFA has data to support that.

“I think what’s important to note here is that, for those of us that have been working in the game, we do know these things anecdotally, but now we actually have data and statistics to back up the knowledge that we have, which is very, very important when it comes to having, certainly, discussions around key decisions that need to be made at club and league level,” Bareman said. “It’s also very important when we look to the future of the game, and we’re making decisions that will impact on the future of the game, that we are able to have real data and statistics to back that up.”

The data could also help guide FIFA decisions on the competition schedule and developing a Women’s Club World Cup. There has also been talk of holding both the men’s and women’s World Cup every two years, rather than the current four.