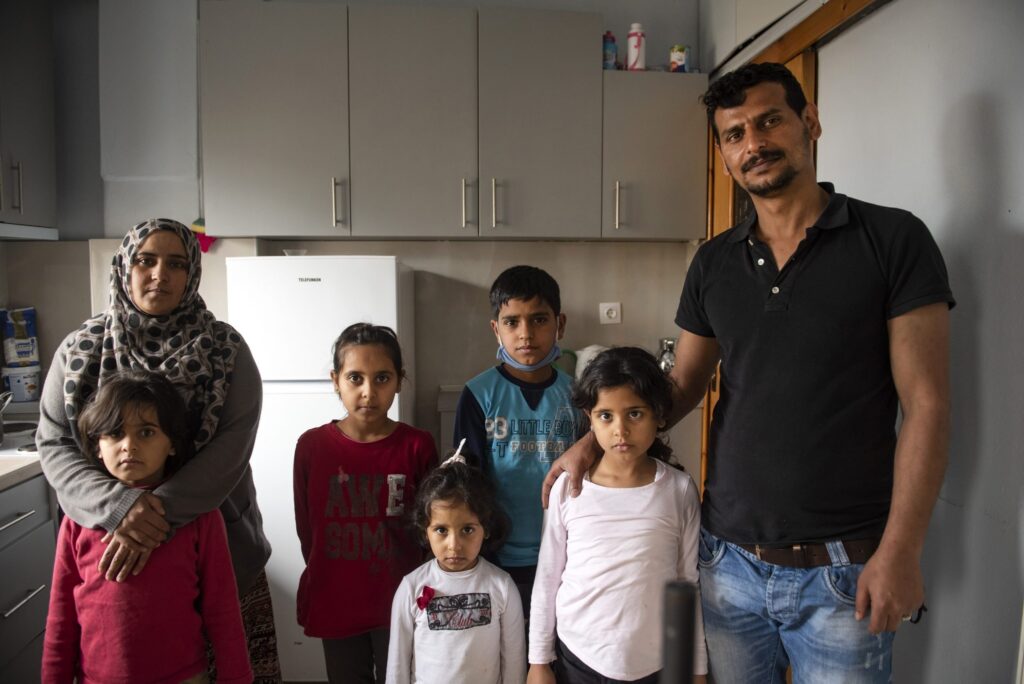 The Al Khawien family was separated in 2017 as they fled bombs in Syria. Miraculously, they found each other three years ago in a refugee shelter in Greece’s second city of Thessaloniki. The Associated Press has the heartwarming story:

THESSALONIKI, Greece (AP) — Torn apart in the deadly chaos of an air raid, a Syrian family of seven has been reunited, against the odds, three years later at a refugee shelter in Greece’s second city of Thessaloniki, a centuries-old melting point of cultures overlooking the Aegean Sea.

When the warplanes screamed in over the village of Dana, near Idlib in Syria, in September 2017, Abdul Salam Al Khawien was at home with his five children. His wife, Kariman, was out shopping in the marketplace. Bombs burst among the stalls, scattering corpses and knocking her unconscious.

Related: Is Stalemate the Least Bad Option in Syria?

She spent the next week recovering in a clinic, and by the time she was well enough to leave, Abdul had fled with the children to safety across the Turkish border, some 15 kilometers (9 miles) away.

Now in different countries, lacking mobile phones, internet or any other means of communicating or learning what had happened to each other, Kariman and Abdul each lost hope that the other had survived.

Until, one day last August, Kariman’s brother discovered a social media account with a photograph of her eldest son, Hamza. It had been opened by Abdul, who had managed to reach Greece with the children — in his fifth attempt, having paid smugglers 5,000 euros ($6,000) for berths in a flimsy boat with more than 60 others — and had been granted asylum.

She immediately got in touch.

Related: US Concerned About Closing Humanitarian Access Into Syria

“I had a good feeling that day,” Abdul, a 37-year-old former car salesman from a village near Homs, told The Associated Press. “When I saw the message I nearly went mad with joy. I didn’t tell the children, though. I thought it would be better for them to find out when she got here.”

Before, he said, whenever the children had asked about their mother, he told them she was in Syria and would rejoin them one day. “But they suspected she was dead,” he said. “I had lost all hope.”

The 32-year-old mother still faced a daunting prospect: Making the dangerous — and illegal — journey from Syria to Turkey and then Greece, assisted by smuggling gangs.

She was able to raise the cash and entered Turkey with other Syrian refugees, finally reaching Istanbul. “From there, using smugglers, I tried to enter Greece by crossing the Evros River” that runs along the Greek-Turkish land border, she said.

Related: OPCW Sanctions Syria Over Use Of Chemical Weapons

But they were caught by Greek border guards and, according to Kariman, were sent back a day later to Turkey in the type of illegal action, known as a pushback, that Greece has repeatedly been accused of using against migrants slipping across the porous frontier. Greek authorities deny the practice.

Her second try, in November 2020, was successful. She found her way on foot, in the dark, to a Greek village.

“I went into a coffee shop and broke into tears,” she said. “They asked me where I was from, I said Syria, and they welcomed me. … I sat on a balcony with a woman and drank coffee, and she made me understand, in sign language, that I was now safe.”

She was able to contact Filoxeneio, the facility set up by the Arsis NGO and the Thessaloniki municipality where Abdul and the children were living, and after registering with police the family was reunited.

Filoxeneio coordinator Manolis Zougos said he’d never encountered such a story during the 17 years he’s been working with refugees.

“Up to the last minute we had thought her dead, which is what Abdul believed,” he said. “He had had a hard time. He was on his own and needed to perform multiple roles for his children.”

Even before the air raid on Dana, the family had struggled to escape violence in Syria’s civil war.

“We changed locations 28 times, starting from our village near Homs in 2011,” Abdul said. “I had just built our house there, and it was destroyed. Whenever unrest came, we moved on. … As soon as we heard a bombardment, we grabbed blankets, a tent and a generator, put them in the car and left.”

Abdul says he wants to reach Germany, where his brother and sister live.

“Greece is a very safe country, but it is difficult to find work,” he said. “It’s difficult for us.”