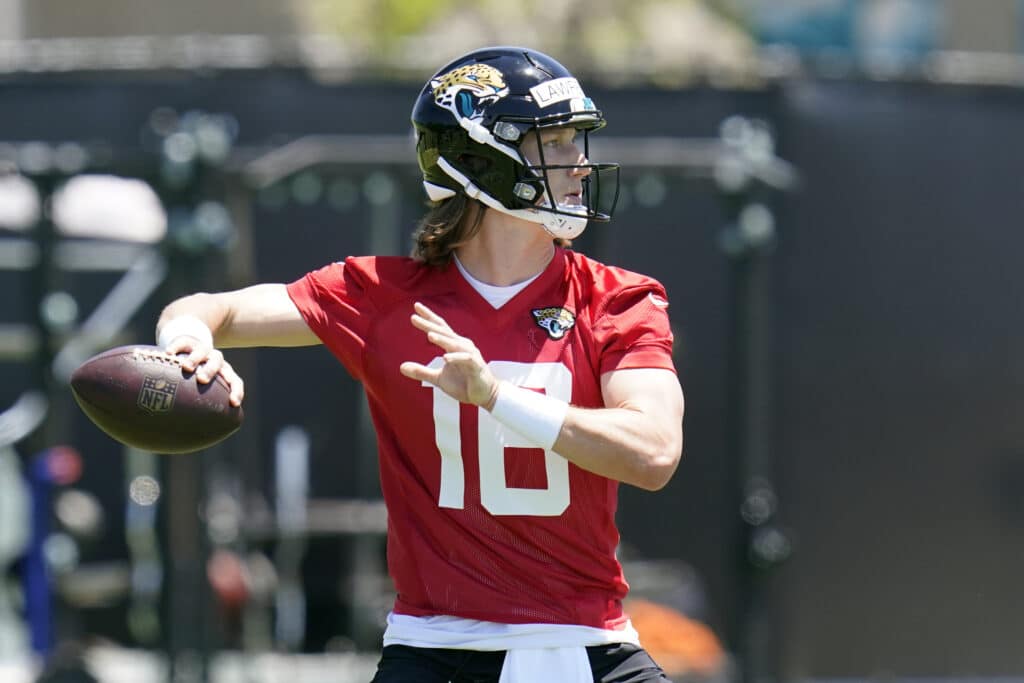 Tim Tebow has gone back to football, signing as a tight end with the Jacksonville Jaguars, and fellow teammate Trevor Lawrence couldn’t be happier. Tebow is 33 and had taken a hiatus to play baseball for five years with the New York Mets. The Associated Press has the story:

(AP) Trevor Lawrence is excited to have Tim Tebow as a teammate.

The Jacksonville Jaguars signed Tebow last week, giving the former Florida star and 2007 Heisman Trophy-winning quarterback an opportunity to revive his pro career as a tight end catching passes from their rookie No. 1 overall pick.

“He looks great,” Lawrence said on the AP Pro Football Podcast. “He’s just a guy that you want to be around. Character is awesome. Had a few conversations with him and I can already tell, and just a hard worker. No one is going to work harder than him. Those are the kind of guys you want in your locker room and you want to be around every day. And then I’m excited to see what he can do on the field as well. We got in a few days and he looks great. He’s in awesome shape.”

The 33-year-old Tebow is returning to the NFL after playing baseball the past five years (2016-20) in the New York Mets’ organization. He’s reuniting with Urban Meyer, his college coach, and joining Lawrence following the 21-year-old’s standout career at Clemson.

“I never met Tim until last week so I didn’t really know him but I was intrigued by his character, his work ethic and what he’s been able to do throughout his life on the field and off the field,” Lawrence said.

“All those things are really interesting so I was excited to meet him. When it was official, I saw him in the locker room and had a few good conversations and I really like him.”

Lawrence and Meyer are aiming to immediately instill a winning culture in Jacksonville, which has had one winning season in the past 13 years.

“He’s awesome, definitely a player’s coach,” Lawrence said of Meyer. “What I love is the expectations are very clear. There’s no misconstruing anything. We know what’s expected of us and he takes care of us. He knows how to coach a football team, he knows how to win. And I think with any great leader, especially a coach, you got to have someone where communication is super detailed and precise. And he’s definitely that way. Everyone’s on the same page and I just like the energy that he’s bringing in here, and that we’re expecting to win this year. We don’t have a five-year plan. This isn’t let’s get a little bit better and then eventually we’ll win. Let’s win as soon as we can. Let’s win now.”

Lawrence was 34-2 as Clemson’s starter

Lawrence is used to winning. He was 34-2 as Clemson’s starter and led the Tigers to the 2018 national championship.

“They didn’t bring me in to expect to lose so even though we haven’t had that much success in the past, this is a new year, this is a new team and really a new mind-set with the coaching staff and what they’re bringing in,” he said. “The biggest thing is just to continue being myself, and obviously, I’m going to put the work in and I’m going to earn it. I’m gonna be prepared, but overall, just keep being me.”

Lawrence has been impressed the Jaguars have had almost 100 percent participation at voluntary workouts this week.

“It just shows kind of where this team is at and what we want moving forward so I really like the energy that’s here right now,” he said. “Really just excited to be a part of it.”

Lawrence had labrum surgery on his left, non-throwing shoulder in February so the team has been cautious with him so far.

“Every week we’re making some adjustments and progressing forward and we have a great plan being cautious, but also getting back in the swing of doing normal things at practice,” Lawrence said. “I feel like I’m pretty far along. I don’t want to give like a certain percentage, but I feel like I’m doing really well. It doesn’t bother me at all. Honestly, I’m a little limited on weight that I can do with my left shoulder but other than that, movement-wise, I got full range of motion. It’s feeling really good so we’re making all the steps in the right direction.”

Lawrence took time Tuesday on a video conference call to give USC recruit Jaxson Dart news that the high school quarterback from Utah won the 2020-21 Gatorade National Football Player of the Year award. The award recognizes outstanding athletic excellence, high standards of academic achievement and exemplary character demonstrated on and off the field.

“It’s really special to be a part of that,” said Lawrence, who signed an endorsement deal with Gatorade last month. “I love how it’s three things involved in that. It’s obviously what you do on the field, what you do in the classroom and in your community. I think that’s a super cool thing for an award that prestigious to make all those things just as important as the other one.”