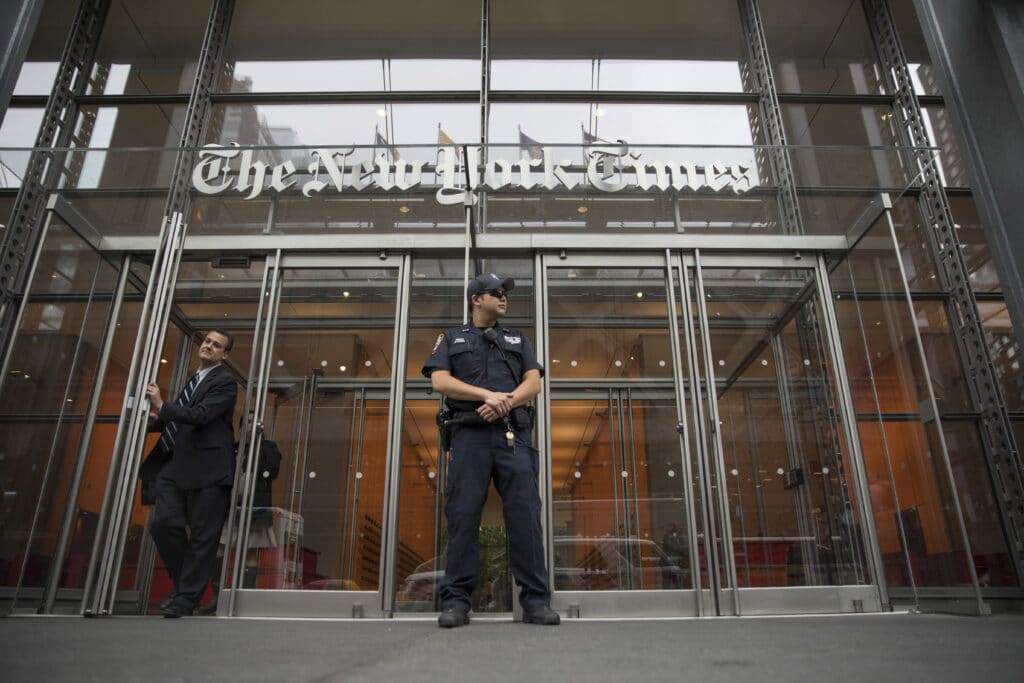 The New York Times reported that four of its reporters had their phone records seized by the DOJ under the Trump administration. It was part of a leak investigation. The Associated Press has the story:

It is the third instance over the last month in which a news media organization has disclosed that federal authorities seized the records of its journalists in an effort to identify sources for national security stories published during President Donald Trump’s administration.

President Joe Biden has said he would not allow the Justice Department to continue the practice of obtaining reporters’ records, calling it “simply, simply wrong.”

Justice Department spokesman Anthony Coley said the department notified the four reporters on Wednesday that it had obtained their phone toll records last year and that it had sought to obtain non-content email records as part of “a criminal investigation into the unauthorized disclosure of classified information.”

The newspaper said the records that were seized covered a nearly four-month period in 2017 and belonged to reporters Matt Apuzzo, Adam Goldman, Eric Lichtblau and Michael S. Schmidt. Lichtblau has since left the newspaper.

Related: Trump increasingly appears to be Running for President

The journalists are neither the subjects nor the targets of the investigation, Coley said.

“Forthcoming annual public reports from the Department covering 2019 and 2020 will indicate that members of the news media have now been notified in every instance in this period in which their records were sought or obtained in such circumstances,” Coley said.

The Justice Department did not disclose which article it was investigating, according to the newspaper.

Investigation was likely over coverage of Hillary Clinton’s emails

But the period covered by the phone record seizure encompasses an April 2017 story from the four journalists that described the decision-making of then-FBI Director James Comey during the conclusion of the Hillary Clinton email investigation, and that referenced a classified document obtained by Russian hackers.

Dean Baquet, the executive editor of The Times, said in a statement published by the newspaper that seizing reporters’ phone records “profoundly undermines press freedom.

“It threatens to silence the sources we depend on to provide the public with essential information about what the government is doing,” Baquet said.

The Washington Post disclosed last month that the Justice Department had last year obtained phone records belonging to three of its journalists who covered the investigation into 2016 Russian election interference. CNN later revealed that the department had seized phone records of its Pentagon correspondent, Barbara Starr.

Related: Facebook suspend trumps for 2 years, then will reassess

After those disclosures, Biden told a reporter he would not allow the Justice Department to persist in obtaining reporter phone records. That would mark a break from Democratic and Republican predecessors alike, whose administrations have seized reporter call logs in an effort to identify sources of classified information.

The Justice Department under former Attorney General Eric Holder announced revised guidelines for leak investigations, requiring additional levels of review before a journalist could be subpoenaed — though it did not end the practice.