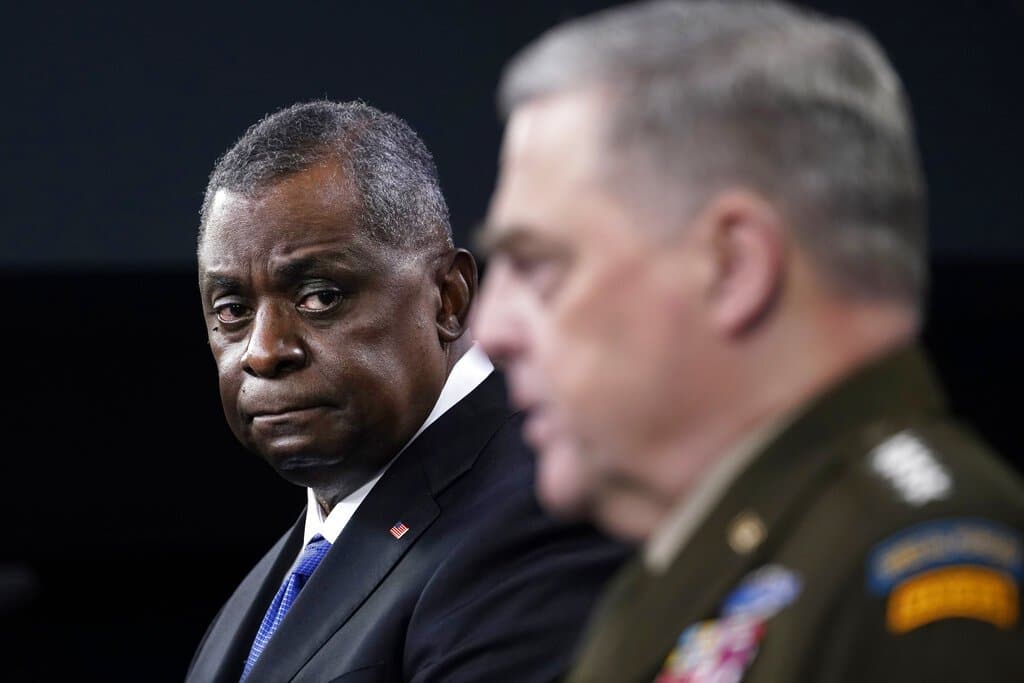 Expecting interference from the Taliban as it pulls troops out of Afghanistan, the US sends extra warplanes nearby to be ready for violence. While there hasn’t been any attacks on U.S. troops since the withdrawal began on May 1, the Taliban has engaged in “sustained levels of violent attacks” against Afghan forces. The Associated Press has the story:

Gen. Mark Milley, chairman of the Joint Chiefs of Staff, said F-18 attack planes have been added to a previously announced package of air and sea power — including the USS Dwight D. Eisenhower aircraft carrier in the North Arabian Sea and six Air Force B-52 bombers based in Qatar — that can be called upon as protection for withdrawing troops. Also part of that previously announced package are several hundred Army Rangers.

U.S. officials said before the withdrawal began that they expected the Taliban to attempt to interfere, even as the insurgents continue pressuring government forces, especially in Helmand and Kandahar provinces in southern Afghanistan.

“There continue to be sustained levels of violent attacks” by the Taliban against Afghan security forces, Milley said, speaking alongside Defense Secretary Lloyd Austin at a Pentagon news conference. He said there have been no attacks against U.S. or coalition forces since they began pulling out of the country on about May 1, and he described the Afghan forces as “cohesive,” even as speculation swirls around Kabul’s ability to hold off the Taliban in the months ahead.

Both Milley and Austin, a retired Army general, are veterans of the war in Afghanistan.

Milley said the Pentagon is considering options for continued support of Afghan government forces after the troop withdrawal is complete, including possibly training Afghan security forces in another country. That would be in addition to urging the Congress to authorize continued financial assistance to the Afghan forces, which has been in the range of $4 billion a year for many years, and possibly providing aircraft maintenance support remotely from another country.

Milley said Afghanistan’s air force is central to the strategy for holding off the Taliban, but the durability of those planes is in some doubt. The U.S. Special Inspector General for Afghanistan Reconstruction said in an April 30 report that without continued foreign contractor support, none of the Afghan air force’s airframes can be sustained as combat effective for more than a few months.

Austin acknowledged that holding off the Taliban without American support on the ground “will be a challenge” for the Afghans.

“We’re hopeful that the Afghan security forces will play a major role in stopping the Taliban,” Austin said. “What we’re seeing unfold is what we expected to unfold — increased pressure” on the Afghan forces. He asserted that government forces launched a counterattack this week against the Taliban in Lashkar Gah, the capital of Helmand province, and that they were “performing fairly well.”

President Joe Biden announced last month that all American troops will withdraw from Afghanistan by Sept. 11. NATO allies have said they will do the same, and troops have already begun leaving. Austin said the “drawdown is going according to plan.”

The Pentagon has said there were about 2,500 U.S. troops there in recent months, and Milley said in an interview last weekend that the total rises to 3,300 if special operations forces are counted. Military commanders have said that additional forces will flow in temporarily to help with security and logistics for the drawdown.

Pentagon officials have said they will do all they can to monitor terror threats and help the Afghans from other locations in the region, described as “over the horizon.” But officials have not detailed where those would be.

Gen. Frank McKenzie, the top U.S. commander for the Middle East, has warned that Afghanistan’s military “will certainly collapse” without some continued American support once all U.S. troops are withdrawn. He has expressed concerns that Afghan forces may be unable to prevent the Taliban from taking more ground, and said the Afghans will need help and funding to maintain and fly their aircraft.

Milley said last week that Afghan government forces face an uncertain future and, in a worst-case scenario, some “bad possible outcomes” against Taliban insurgents as the withdrawal of American and coalition troops accelerates in the coming weeks.

On Thursday, Milley took a hopeful tone in speaking about the government forces avoiding a collapse.