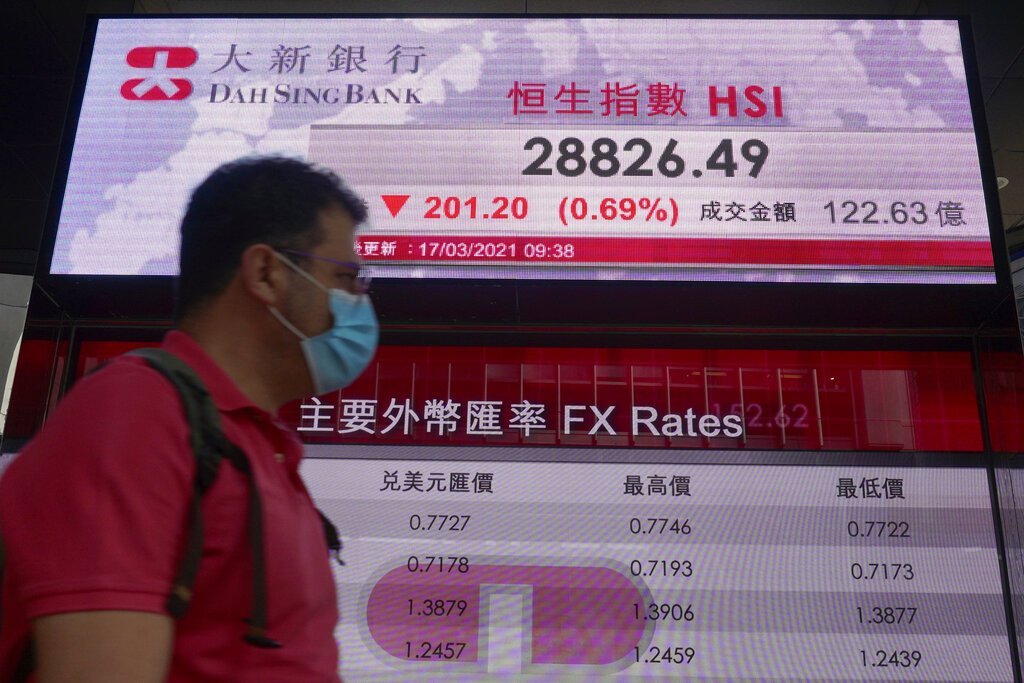 AP-Stocks closed higher Wednesday, reversing an early slide after the Federal Reserve reassured Wall Street that it expects to keep its key interest rate near zero through 2023.

The central bank’s renewed commitment to leaving rates at rock bottom lows comes even as its latest economic forecast calls for growth of 6.5% this year and for inflation to climb above 2% for the first time in years. Wall Street has been anxious about the potential for higher inflation to drive up bond yields further and has been looking for signs that the central bank shares its concerns.

Fed Chair Jerome Powell’s remarks during a news conference appeared to do the trick. Major stock indexes had been down for most of the day, led by another wave of selling in technology companies as bond yields rose, driving the closely watched 10-year Treasury yield up to 1.68% at one point, the highest level since January 2020.

After Powell spoke stocks gradually pivoted higher and bond yields fell. The turnaround nudged the S&P 500 and Dow Jones Industrial Average to all-time highs and pulled the tech-heavy Nasdaq out of the red.

“He reassured the market that the Fed is going to the extent possible be patient about even talking about raising rates,” said Willie Delwiche, investment strategist at All Star Charts.

Banks, industrial stocks and companies that rely on consumer spending helped lift the market. Those gains outweighed a pullback in health care, utilities and other sectors.

Treasury yields mostly fell, reversing an earlier move higher. The yield on the 10-year U.S. Treasury note, which has surged in recent weeks on inflation concerns, rose to 1.64%, the highest level since February 2020. It hit 1.62% late Tuesday.

Higher yields put downward pressure on stocks generally, in part because they can steer away dollars that had been headed for the stock market and into bonds instead. That makes investors less willing to pay as high prices for stocks.

Investors are betting big that the economic malaise will dissipate as spring arrives and more Americans get vaccinated against the coronavirus. The $1,400 stimulus checks the Biden administration began sending to individuals last weekend are also helping. But faster economic activity could also translate into some degree of inflation.

The Fed policymakers now forecast that the national unemployment rate will drop faster than they did in December: They foresee unemployment falling from its current 6.2% to 4.5% by year’s end and to 3.9%, near a healthy level, at the end of 2022.

That suggests that the central bank will be close to meeting its goals by 2023, when it expects inflation to exceed its 2% target and for unemployment to be at 3.5%. Yet it still doesn’t project a rate hike then.

At least some Fed officials appear to be closer to tightening up the central bank’s ultra-low-rate policies. Four of the 18 policymakers now expect a rate hike in 2022, up from just one in December. And seven predict a hike in 2023, up from five in December.

Previous Article
IRS will delay tax filing due date until May 17
Next Article
UAE-Israel relations: A first big test.