24 sexual misconduct lawsuits against Deshaun Watson may result in suspension 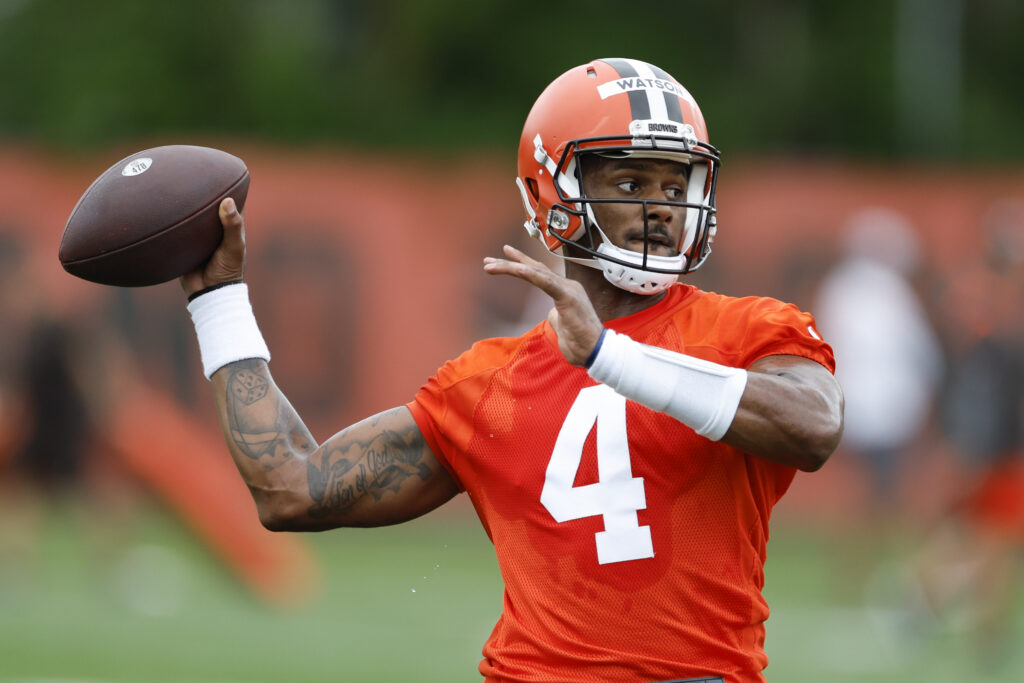 Cleveland Browns quarterback Deshaun Watson is very likely to end up suspended by the NFL due to 24 lawsuits that have been filed against him for sexual misconduct. He’s settled 20 of them so far, which are mostly from massage therapists who accused him of improper behavior including sexual assault. The Associated Press has the story:

HOUSTON (AP) — Cleveland Browns quarterback Deshaun Watson’s decision to settle 20 of 24 civil lawsuits for sexual misconduct may not dissuade the NFL from giving him a lengthy suspension, a person familiar with the league’s investigation told the Associated Press on Tuesday.

Watson has been accused by massage therapists of harassing, assaulting or touching them during appointments when he played for the Houston Texans.

Houston attorney Tony Buzbee, who represents all 24 women, said Tuesday in a statement that once the paperwork is finished on the 20 settlements, “those particular cases will be dismissed.” He added that the terms of the settlements are “confidential” and that his legal team “won’t comment further on the settlements or those cases.”

Watson still faces discipline from the league, which conducted its own investigation into the 26-year-old’s behavior and is expected to make a decision before the Browns open training camp on July 27.

Another league official told the AP “settling doesn’t give someone a pass” and indicated a lengthy suspension remains in order. The person spoke on condition of anonymity because the investigation hasn’t concluded.

NFL investigators interviewed Watson in Houston over several days last month. They’ve spoken with 11 of Watson’s accusers, according to a person familiar with the investigation, who said Buzbee declined to make more women available for interviews.

The league will present their findings to disciplinary officer Sue L. Robinson, a former federal judge who will decide Watson’s punishment. This is the first case for Robinson, who was jointly appointed by the league and NFL Players Association.

The Browns, who signed the three-time Pro Bowler to a fully guaranteed, five-year, $230 million contract in March, had no immediate comment on the settlements.

Watson has denied any wrongdoing and vowed to clear his name. Rusty Hardin, Watson’s lead attorney, did not immediately return an email or a text seeking comment.

In March, two separate Texas grand juries declined to indict him on criminal complaints stemming from the allegations. After that, the Browns and several other teams pursued Watson, with Cleveland convincing him to waive his no-trade clause and join a team with a solid roster.

The first 22 lawsuits against Watson were filed in March and April 2021. The last two lawsuits were filed after HBO’s “Real Sports with Bryant Gumbel” aired an interview last month with two of the women who detailed their encounters with Watson.

The settlements also come after The New York Times reported earlier this month that Watson had booked massage appointments with at least 66 different women over 17 months while he played for the Texans. The report said that a Texans representative had provided Watson with a nondisclosure agreement that he gave to some of the women to sign.

Last week, Watson reiterated his innocence and sidestepped any questions about whether he would settle with any of the women.

“I never assaulted anyone,” Watson said June 14 in his first public comments since being introduced by the Browns in March. “I never harassed anyone or I never disrespected anyone. I never forced anyone to do anything.”

Buzbee said he plans on taking the four unsettled lawsuits to trial, including the first one that was filed by Ashley Solis, who has previously made her name public. In an interview with HBO’s “Real Sports with Bryant Gumbel,” Solis said she felt threatened by Watson after their massage session when he told her that she had a career to protect and “I know you don’t want anyone messing with it just like I don’t want anyone messing with mine.”

Buzbee said that without Solis, “the conduct experienced by these women would likely have continued unfettered.”

“The truth is, without her courage and willingness to come forward, the NFL wouldn’t currently be contemplating discipline; there would be no examination of how teams might knowingly or unknowingly enable certain behavior,” Buzbee said.

Cleveland, which has spent nearly two decades searching for a franchise quarterback, pursued and signed Watson despite his complex legal situation.

Owners Dee and Jimmy Haslam knew the Browns would face heavy criticism for the move, but they were comfortable with the decision after conducting their own investigation and meeting privately with Watson.

Now, the team is eager to know how long they might be without Watson. The Browns signed veteran backup Jacoby Brissett, who will move into the starting job if Watson is suspended.

By JUAN A. LOZANO and ROB MAADDI