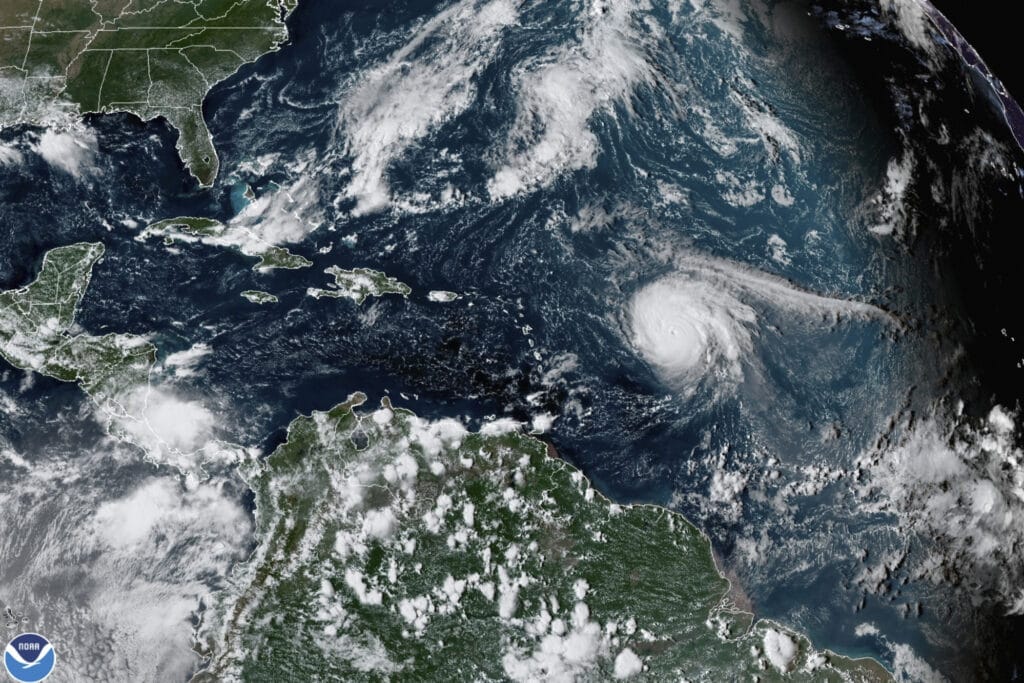 The era of wild weather continues, with meteorologists predicting a seventh straight summer of bad Atlantic hurricanes. Usually there are about 14 storms each summer, but the last seven years it’s been quite higher, and meteorologists estimate 14 to 21 this summer. The Associated Press has the story:

The National Hurricane Center ran out of names for Atlantic storms in the last two years, with a record-setting 30 named storms in 2020 and 21 last year. In the past five years there have been more Category 4 and 5 hurricane landfalls in the United States than in the previous 50 years combined.

This hurricane season “is going to be similar to last year and given that you need only one bad storm to dramatically affect your life, if you fail to plan around this outlook, you’re planning to fail,” NOAA Administrator Rick Spinrad told The Associated Press Tuesday. “You can take this outlook to the bank literally when it looks to protecting your property.”

Every weather factor pointed to a busier season, said Matthew Rosencrans, lead hurricane season outlook forecaster for NOAA’s Climate Prediction Center. He pointed to a multi-decade long trend to more storms in the Atlantic, an active monsoon season in West Africa, a La Nina — the natural and occasional cooling of parts of the equatorial Pacific that changes weather worldwide — and warmer than normal ocean temperatures, which scientists say are stoked by climate change.

Several outside hurricane experts agree with NOAA that the Atlantic conditions are ripe for yet another active hurricane season. They say La Nina reduces wind shear that could decapitate storms. The warmer water — about half a degree warmer (0.3 degrees Celsius) than last year in storm-forming areas, according to Rosencrans — serves as hurricane fuel. A reduction in pollution particles in the air has taken away artificial cooling in the Atlantic and a new study links that to increasing storms.

“We’re seeing these storms happen more frequently. They’re lasting longer,” FEMA Director Deanne Criswell said in a New York City press conference. NOAA says 13 people in the city died during Hurricane Ida with 11 of them dying in flooded basements. It is also the 10th anniversary of Superstorm Sandy, a downgraded hurricane that became one of the most expensive weather disasters in American history with massive flooding in New York.

“We’ve seen such a dramatic change in the type of weather events that could be seen as a result of climate change,” Criswell said.

One key indicator, that takes into account the number of storms, how strong they are and how long they last, is called Accumulated Cyclone Energy index or ACE and Rosencrans said this year could be as much as double what’s been normal since 1950. The calculation is used when determining what is an average season and what’s above average.

That stretch of six straight above-average years is a record, smashing the old mark of three-in-a-row, said Colorado State University hurricane researcher and seasonal forecaster Phil Klotzbach. He said it is highly likely that the record will stretch to seven this year.

NOAA’s predictions mesh with ten o ther meteorological teams — government, university and private — that have made their hurricane season predictions. The average of their predictions is 20 named storms, eight becoming hurricanes and four becoming major hurricanes.

Because La Nina has a different effect in the Pacific and conditions usually are opposite, earlier this month NOAA predicted a quieter than normal Pacific storm season.