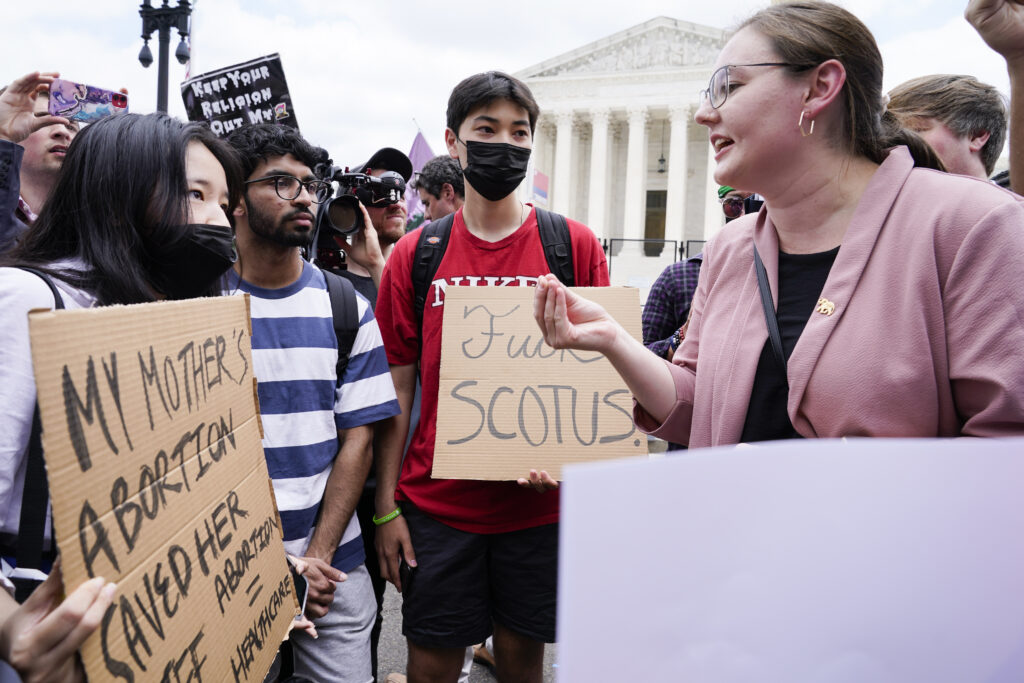 Many abortion clinics in red states have already shut down, realizing they could be subject to prosecution now that the Supreme Court has overruled Roe v. Wade. Some states already had laws on the books banning abortion that had been ignored since 1973 when Roe v. Wade was issued. The Associated Press has the story:

(AP) Abortion bans that were put on the books in some states in the event Roe v. Wade was overturned started automatically going into effect Friday, while clinics elsewhere — including Alabama, Texas and West Virginia — stopped performing abortions for fear of prosecution, sending women away in tears.

“Some patients broke down and could not speak through their sobbing,” said Katie Quinonez, executive director of West Virginia’s lone abortion clinic, whose staff spent the day calling dozens of patients to cancel their appointments. “Some patients were stunned and didn’t know what to say. Some patients did not understand what was happening.”

America was convulsed with anger, joy, fear and confusion after the Supreme Court overturned Roe. The canyon-like divide across the U.S. over the right to terminate a pregnancy was on full display, with abortion rights supporters calling it a dark day in history, while abortion foes welcomed the ruling as the answer to their prayers.

In eliminating the constitutional right to abortion that has stood for a half-century, the high court left the politically charged issue up to the states, about half of which are now likely to ban the procedure.

The reaction across the country largely fell along predictable political lines.

New Mexico Gov. Michelle Lujan Grisham, a Democrat in a state where abortions are available with few restrictions, called the ruling a “war on women” and vowed to stand as a “brick wall” to help preserve the right. Republican Virginia Gov. Glenn Youngkin vowed to seek a ban on abortions after 15 weeks.

Florida Gov. Ron DeSantis, a conservative Republican widely considered a potential candidate for president in 2024, tweeted: “The Supreme Court has answered the prayers of millions upon millions of Americans.”

The issue is certain to intensify the fall election season. Both sides intend to use the issue to energize supporters and get them to vote.

“This country is lurching to the right, taking away rights. The voters are going to have to intervene,” said Democratic Rep. Jim Clyburn of South Carolina, the U.S. House majority whip. “We’re headed to an autocracy with women being subservient to the wishes of men.”

Some states, such as Louisiana, Arkansas and Oklahoma, had “trigger law” bans on the books that went into effect as soon as Roe fell.

In Alabama, the state’s three abortion clinics stopped performing the procedure for fear providers would now be prosecuted under a law dating to 1951.

At the Alabama Women’s Center for Reproductive Alternatives in Huntsville, the staff had to tell women in the waiting room Friday morning that they could not perform any more abortions that day. Some had come from as far away as Texas for an appointment.

“A lot of them just started breaking down crying. Can you imagine if you had driven 12 hours to receive this care in this state and you are not able to?” clinic owner Dalton Johnson said. Patients were given a list of out-of-state places still doing abortions.

In Texas, providers wondered which law they had to follow: a 1925 ban, a 2021 law that limits abortions to the first six weeks of pregnancy, or a trigger law that bans the procedure outright, but wouldn’t take effect for a month or more. The confusion led them to suspend abortions while they seek legal advice.

It was the risk of prosecution under a 19th-century abortion ban punishable by prison that led the Women’s Health Center of West Virginia to stop performing the procedure.

West Virginia Gov. Jim Justice, a Republican, said he will not hesitate to call the Legislature into special session if the ban needs to be clarified.

The high court ruling brought strong reactions around the country.

Carol E. Tracy, the executive director of the Women’s Law Project in Philadelphia, was “absolutely furious.”

“They want women to be barefoot and pregnant once again,” she said. “But I have no doubt that women and like-minded men, and people in the LGBTQ community, who are also at great risk, … we’re going to fight back. I think it’s going to be a long, hard fight.”

Garrett Bess, who works with a lobbying arm of the conservative Heritage Foundation, said his group will continue to press states to restrict abortion.

“We’ll be working with grassroots Americans to ensure the protection of pregnant mothers and babies,” Bess said outside the Supreme Court. “This has been a long time coming, and it’s a welcome decision.”

They include Alison Dreith, 41, an abortion activist in southern Illinois, where the governor has vowed to keep the procedure accessible. She said she fears for the safety of abortion workers, especially those who help people from states where the procedure is banned.

“I absolutely believe that they will try to come after me. I’m not built for prison, but I’m ready,” she said, “and I say, ‘Let’s do this.’ You want to pick that fight with me? I’m fighting back.”

Boston’s Roman Catholic Cardinal Sean O’Malley, the spiritual leader of about 1.8 million Catholics, called the ruling “deeply significant and encouraging.” But he also cautioned against stigmatizing or making criminals out of women who have had abortions or are considering them.

“Too often isolated and desperate, women have felt they had no other choice,” O’Malley said.

Medical student LaShyra Nolen, the first Black woman to become class president of Harvard Medical School, said she fears the effect of abortion bans on minority and poor women, among others.

“In the past month, we’ve seen that this country is not prepared to make sure that babies have access to formula, to be fed everyday. We’ve seen that our children are not safe at our schools, because of a lack of gun control. We also continue to see devastating statistics that Black women are more likely to die in childbirth compared to white women,” Nolen said.

“So when you have these harrowing disparities that exist in our country, and you force someone to give birth,” she said, “I think it’s going to lead to really dangerous measures and really dangerous conclusions.”

AP reporters from across the U.S. contributed to this report.