A YEAR AFTER THE ABRAHAM ACCORDS, REASONS FOR HOPE 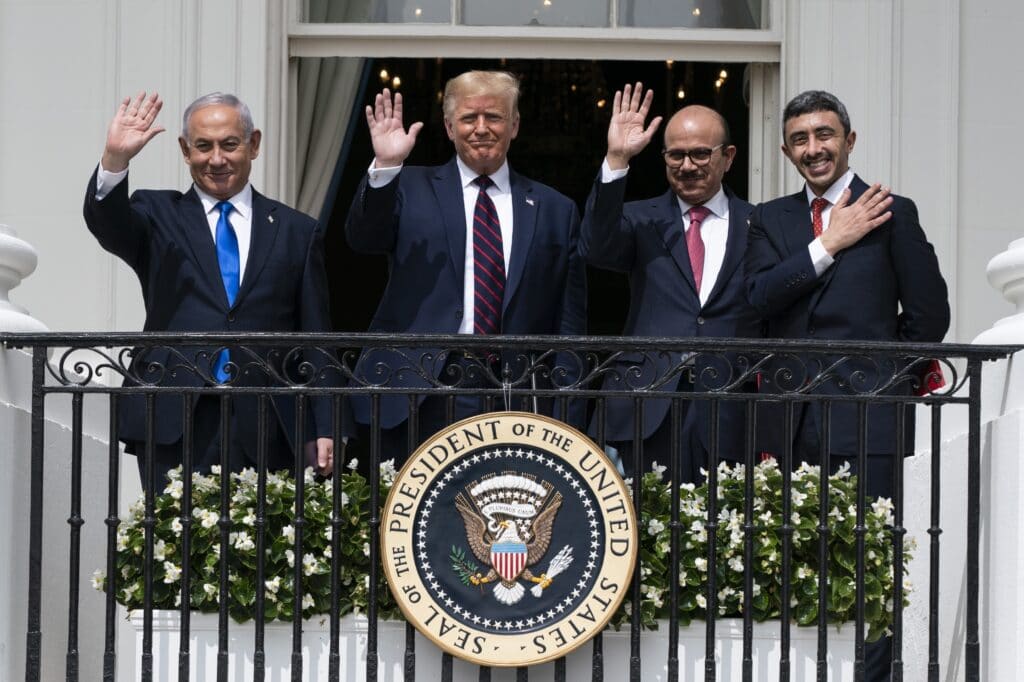 A YEAR AFTER THE ABRAHAM ACCORDS, REASONS FOR HOPE

With so many reasons for despair as 2021 ends, one can look to an unlikely corner of the world for hope that a new year will better the human condition.

Just last month, the United Arab Emirates, Jordan, and Israel signed an agreement, in the presence of U.S. climate envoy John Kerry, that will create a massive solar energy complex in Jordan sending electricity to Israel in exchange for new supplies of desalinated water, with UAE technical and financial support.

At the UAE’s 50th anniversary National Day early this month, Ambassador Yousef Al Otaiba showcased the burgeoning opportunities “in trade and technology and culture and education” between his country and Israel – their joint efforts to enhance “security, peace and stability.”

The following week, new Israeli Ambassador to the U.S. Michael Herzog was a prominent guest at Bahraini Ambassador Abdulla bin Rashid Al Khalifa’s 50th National Day celebration, along with ambassadors of GCC countries that have yet to formalize relations with Israel.

A few days later, Ambassador Herzog and the Ambassador of Morocco to the U.S., Princess Lala Joumala Al Alaoui, shared a stage, and a vision of increasing cooperation, at a dinner cosponsored by American Jewish Committee celebrating the reestablishment and upgrading of diplomatic ties between their two countries.

A party the following week at the home of Israel’s Deputy Chief of Mission in Washington, Benjamin Krasna, was yet another occasion for Arabs and Israelis to explore common interests and deepen friendships.

A U.S.-UAE-Israel working group on religious coexistence has been announced, and another group has been charged to focus on water and energy cooperation. Two entities based in the UAE – the Higher Committee of Human Fraternity, under the patronage of Pope Francis and the Grand Imam of Al-Azhar, and the Forum for Promoting Peace in Muslim Societies – regularly invite rabbis from the U.S., Europe and Israel to interfaith round tables. Construction of Abu Dhabi’s Abrahamic Family House – a magnificent campus containing a mosque, a church, and a synagogue, along with exhibition and conference facilities – is well underway.

Moroccan authorities and the country’s Jewish community are preparing for a vast increase in tourism from Israel, home to some 700,000 Jews of Moroccan descent. Business councils in Bahrain, Morocco and the UAE have been launched to capitalize on new trade and investment opportunities with Israelis. When Covid restrictions allow, direct flights – another new phenomenon – bring entrepreneurs, financiers, and consultants in both directions between Israel and all three Arab states.

In early 2022 AJC Abu Dhabi: The Sidney Lerner Center for Arab-Jewish Understanding will officially open. It is another demonstration of confidence in the future of inclusiveness and regional integration in the UAE and elsewhere in the Arab Gulf, building on decades of peace between Israel and Egypt, the first Arab state to formalize relations with Israel, in 1979, and the important relationship between Israel and Jordan, established in 1994.

Each day brings news of another high-level exchange, another tangible benefit of peace, between Israel and countries with which it normalized ties just one year ago: Israel’s National Security Adviser addressing the IISS Manama Dialogue, an annual strategic affairs conference, in Bahrain. Israel’s Defense Minister signing a landmark defense deal with Morocco – the first such initiative with an Arab state. Prime Minister Naftali Bennett paying a historic first visit by an Israeli head of government to Abu Dhabi to meet with Crown Prince Mohamed bin Zayed Al Nahyan, resulting in agreement on a joint investment fund.

The pace and potential impact of these developments are breathtaking. Twenty-five years ago, and every year since, AJC delegations meeting with high government officials in Arab capitals were always warmly received, but were told to expect normal relations with Israel only after the achievement of Palestinian statehood.

That is, until two years ago. That’s when UAE Foreign Minister Abdullah bin Zayed Al Nahyan told us his country was ready for full peace with the Jewish state, pending the satisfaction of certain requirements, primarily security based. The Trump administration met those conditions, in consultation with the Israeli government. The dam blocking progress toward regional cooperation for decades was smashed, with Bahrain and Morocco normalization agreements swiftly following. Shifts were seen in the tone and substance of Israel’s relationships with Egypt and Jordan, as well – with public meetings by senior officials, once rare, now a routine occurrence.

What lies ahead, in the second full year of the Abraham Accords? While deep pockets of skepticism and hostility remain across the region, we can hope for the emergence of a new Arab-Israeli commitment to forge a just, pragmatic, and durable resolution of the Israeli-Palestinian conflict. Decades of isolating Israel haven’t helped. A new climate of trust offers a way forward.

More immediately, we can expect an acceleration of the path breaking cascade of 2021: More bilateral and multilateral working groups yielding practical measures to solve entrenched common problems – from the pandemic, to water scarcity, to climate change, to the ongoing terror threat, to Iranian aggression. More people-to-people exchanges, Gulf-Israel and Morocco-Israel study-abroad programs, regional art and music presentations, interfaith dialogues and school curricula reforms to encourage appreciation of difference and mutual respect. More visitors, local and foreign alike, to places like the Crossroads of Civilizations Museum in Dubai, with its well-researched exhibit on the Holocaust; the refurbished House of Ten Commandments synagogue in Bahrain; and the extensively restored Jewish cemeteries and synagogues in Morocco.

All engaged with the Middle East can look forward to 2022 with hope and high expectation. Considering the progress made in just a few years, audacity is a smart bet.