Algeria, the New Base of Iranian Influence in Africa 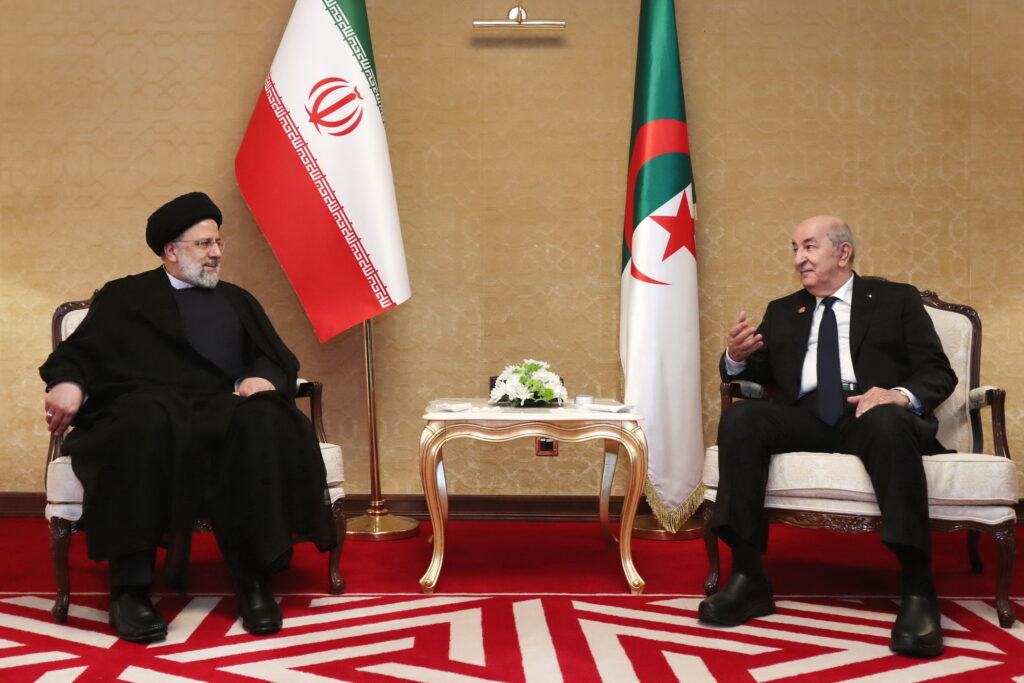 Algeria, the New Base of Iranian Influence in Africa

The Iranian regime of Mullas in Tehran relied ideologically, constitutionally, and militarily on exporting its revolution to the world since Khomeini came to power.
A policy that was established in the state founded on the ruins of the Shah’s rule, overthrown by a popular revolution in 1979.
Exporting the revolution, as seen by the Iranian regime, requires religious expansion through the manufacture of sects affiliated with the rulers of Tehran and their absolute loyalty to the Supreme Leader of the Iranian revolution, established through the theory of “guardianship of the jurist.”
The religious aspect of making sects is not the only concern, but the creation of armed militias, as proven through the experience of “Hezbollah” in Lebanon, the Houthis in Yemen, some Iranian proxies movements in the African continent, and its attempts to manufacture a pro-Iranian Maghreb arm movement as well.
The proliferation of pro-Iranian militias in Iraq after the fall of Saddam Hussein’s regime, the emergence of the Houthis in Yemen, and Iranian military arms in Afghanistan and Syria constituted a dangerous turning point. That brought together, in the Syrian case, the Assad regime loyal to Khamenei and other organizations produced by the Syrian conflict, all of which intersect in A direct or indirect relationship with the Revolutionary Guards and the Quds Force led by Qassem Soleimani, Killed during a US raid at Baghdad airport on January 3, 2020.
Exporting the Iranian revolution turned into an expansionist strategic project, which began to expand through what is known as the Shiite crescent and through the scheme of creating crises and conflicts and then preparing for the currency of infiltration into these wars.
The Arab-Israeli conflict is the clearest example of this scheme, as the Iranian regime succeeded in creating militias affiliated with it, such as Islamic Jihad and Hamas, which in recent years have turned into a military arm of the Quds Force.
Today the Iranian regime is turning its attention to Africa after some signs of retreat in its bases in the Middle East. Such as the Syrian revolution in 2011 against the Assad regime. Uprisings in Iraq that reached Iran’s strongholds in areas of Shiite influence, the formation of the Arab coalition led by the Kingdom of Saudi Arab to confront the Houthis and stop Iran’s plans In Yemen, without forgetting the situation that Hezbollah is experiencing in Lebanon due to the economic crisis and the escalation of street resentment against Iran and its ally, Hassan Nasrallah. After all these transformations. The mullahs of Iran had nothing left to compensate for their losses in the Arab Mashreq but to intensify their movement in the Maghreb. This expansion existed since Khomeini came to power, as Shiite evangelization is taking place in Algeria, Morocco, Tunisia, Libya, and even Mauritania. However, the most significant focus was on the two pivotal countries, the Algerian Republic. And the Kingdom of Morocco.
The Iranian propaganda failure in Morocco is due to the Alawite ruling family’s hostility to Shiism, loyalty to its Maliki Islamic practice, the Sunni creed, and the deep relations that link Rabat with the Gulf countries.
Iran’s failure to infiltrate the Kingdom of Morocco was also due to the deep relations linking Rabat with the Arab Gulf states that share their hostility to the Iranian project that threatens its existence and borders, especially Saudi Arabia, which is considered the most crucial target in the Khomeinist expansionist plans that Khamenei continues fiercely.

On the other hand, the Iranian expansion project is achieving success in Algeria due to the appropriate climate.
Between 2000 to 2022, the number of followers of the Shiites and those loyal to the Supreme Leader in Tehran doubled.
The information available from Algerian security sources following up on this issue confirms that the number of people who believed in Iran’s project and the mandate of the Supreme Leader of the Iranian Revolution exceeded ten thousand people, the majority of whom are from the education sector and universities and are not from the ordinary people, without counting their families and children, who often follow the beliefs of their parents.
The Iranian attempts to influence the Algerian arena date back to the years of the civil war, during which “Hezbollah” succeeded in infiltrating the most dangerous terrorist organization, known as the Armed Islamic Group (GIA).
Mahfouz Tajine took the leadership of the deadliest organization in Algeria, and a terrorist group trained in the suburb of Southern Beirut and eliminated by the security forces in the nineties, as well as other exercises that took place in one of the Revolutionary Guards barracks, which located about 70 km from Tehran.
The Algerian justice condemned some members arrested at the beginning of this millennium.
The Iranian plot also managed to infiltrate the Algerian military establishment through the presence of Shiites in the security services, who have ties to the Iranian embassy and intermarriage relations that target officers in the intelligence, which has become an obsession for some military leaders opposed to the Iranian project. However, they lack influence, unlike the loyalists to Tehran, generals who benefit from corruption deals with Iran and its assistance in smuggling public money through banks subject to the mullahs’ regime.
Iran failed to create its military arm during the civil war, which it seeks to compensate for through the military wing of the Polisario Front. It has intensified sending members of the Guard to Algeria and exchanging visits between anti-Moroccan desert leaders, and the field is open for religious preaching among the Sahrawi refugees who live in a miserable situation resembling detention.
Iran’s influence in Algeria is escalating rapidly with the blessing of a military regime that has opened the way for this expansion to serve Russia and counter the interests of neighboring Morocco.
A situation that may turn the Algerian territory into a base of Iranian malign activities against the rest of the North African countries, as well as the other side of the Mediterranean, that lives on the impact of challenges of Illegal immigration, cross-border international terrorist networks, and other challenges, generally related to the aspirations of the mullahs in Tehran.
In light of the political and social tension in which Algeria is floundering, and if the Iranian activities remain not confronted, North Africa will turn into a volatile region that threatens stability and energy sources and constitutes a source of terrorist risks and security challenges for Europe.
A situation that will threaten democracy and the interests of the United States in the region will undoubtedly constitute an outlet for the Iranian regime, which is suffocating in the Middle East and is working to save its strategic project in the Maghreb countries, especially Algeria.