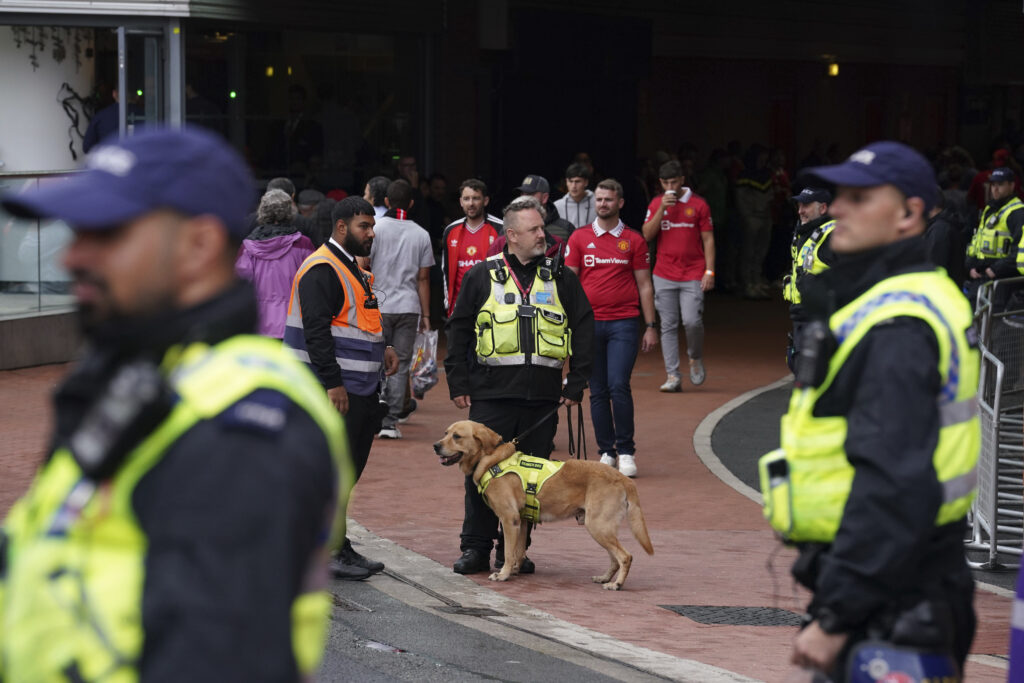 A large group of Manchester United fans angry at the direction of the club under its American owners were taking part in a protest ahead of the Premier League game against Liverpool on Monday.

The supporters chanted against the Glazer family — “We want Glazers out” — and held banners calling for the Americans to sell United as they walked from a nearby pub toward the club’s storied Old Trafford stadium during the hour before kickoff of one of the biggest matches in English soccer.

There appeared to be a large police presence on Sir Matt Busby Way at the entrance to the stadium forecourt.

The players from both teams arrived at the ground before the protest started.

Discontent has soared following United’s poor start to the season, which has seen the team lose both of its games — 2-1 at home to Brighton and a 4-0 humiliation at Brentford.

The target of the majority of the anger is the Glazer family, which bought United in 2005 with a leveraged takeover that loaded debt onto a club which previously didn’t have any. Critics say the Glazers, who also own the NFL’s Tampa Bay Buccaneers, have failed to invest enough of their own cash in the squad or facilities and have presided over years of failure by England’s biggest team.

Payments on interest, debt and dividends to the Glazers are estimated to have cost United more than 1 billion pounds.

“They are ruining the history, traditions and culture of our great club and (we) will not stand by and watch our club rot away any longer,” said The 1958, a fans’ group that arranged Monday’s protest.

Dissent toward the ownership, which has simmered since the 2005 takeover, erupted in May last year when a home league game against Liverpool had to be called off after the stadium — empty because of pandemic restrictions — was stormed before the game and thousands more supporters blocked access into Old Trafford. Two police officers were injured in clashes with fans.

That protest was sparked by the club’s involvement in the failed European Super League breakaway that collapsed amid a groundswell of condemnation from fans and the British government.

The Glazers pledged to rebuild trust with United fans in the wake of that protest but there has been little evidence of that. Joel Glazer, a co-chairman, met in person with United fans in June 2021 and outlined his intentions to invest heavily in all aspects of the club and strengthen fan representation in the decision-making process.

United hasn’t won a major trophy in five seasons, its worst run since the early 1980s, despite the club having spent $1.5 billion on players since 2013.

United’s latest signing, Brazil midfielder Casemiro, arrived at Old Trafford earlier Monday ahead of the Liverpool match. He will reportedly cost $60 million, with the club scrambling to bring in players in the final days of the transfer window.

This season has started badly, too, under Erik ten Hag, its fifth manager since Ferguson. There are already question marks over the Dutch coach’s tactics and team selection.

The future of star striker Cristiano Ronaldo is also uncertain after he pushed to leave during the offseason because United didn’t qualify for the Champions League.

Ronaldo was dropped to the bench against Liverpool, along with club captain Harry Maguire.