Belgium out of World Cup after Croatia 0-0 draw 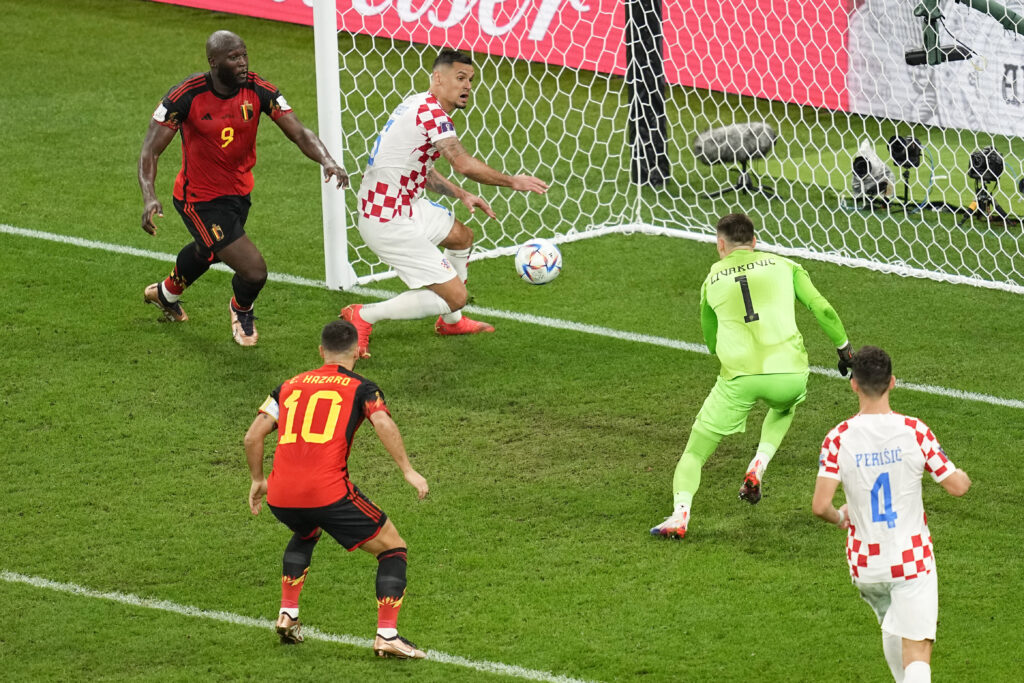 The ball reached Romelu Lukaku right in front of goal with seconds remaining. Score, and he’d send Belgium into the round of 16 of the World Cup. Somehow, he missed. Belgium out of Worl Cup after a draw 0-0 with Costa Rica. The Associated Press has the story:

Belgium out of World Cup after Croatia 0-0 draw

Belgium and its aging generation of players were eliminated from the tournament Thursday after a 0-0 draw with Croatia, which advanced as the second-place team in Group F behind Morocco.

Minutes after the game, Belgium coach Roberto Martinez announced he’d be leaving his role after more than six years — a decision he said he had reached before the World Cup started.

His departure could easily have been delayed.

Lukaku, Belgium’s record scorer but only recently back from injury, came on as a halftime substitute and squandered several great chances, the best coming in stoppage time when Thorgan Hazard’s cross fell to him at the back post, barely 2 meters (yards) out. The ball struck Lukaku’s midriff and instead of rolling into the net, it bounced back across the front of the goal and was gathered by Croatia goalkeeper Dominik Livakovic.

Earlier, Lukaku hit the inside of the post with the goal virtually unguarded. Another chance, from a header in front of goal, sailed over the bar following a cross from Kevin De Bruyne..

Lukaku punched the side of the dugout as he walked off after the final whistle, knocking the plexiglass screen out of place. Moments earlier, he was sobbing in the arms of Belgium assistant coach Thierry Henry.

“We could have won this game by three goals and we’d be walking away feeling very different,” Martinez said.

Croatia, the 2018 runner-up led by Luka Modric, will attempt to make another deep run at the World Cup after also reaching the semifinals in 1998.

The Croats will next play Japan on Monday.

“This is a team mix of experience and youth,” said Croatia coach Zlatko Dalić, who added of Belgium: “We were lucky that they didn’t take their chances.”

Belgium is facing the break-up of its talented but underachieving squad after failing to live up to its status as the second-ranked team and one of the tournament favorites. What has long been called Belgium’s “Golden Generation” — now featuring six players with more than 100 appearances — is set to split with the World Cup semifinal appearance in 2018 as its peak.

The team, which has faced reports of infighting and divisions between players during the tournament in Qatar, scored only one goal in three games and saved its best performance until its final match. It came too late.

The fitness issues of Lukaku — injured for most of this season with thigh and hamstring problems — have proved to be a huge blow for the team. The Inter Milan striker missed the 1-0 win over Canada, came on as an 81st-minute substitute in the 2-0 loss to Morocco, and then played the second half against Croatia.

Throughout the tournament, De Bruyne in particular has found himself in great positions around the area but with no one to feed.

With Lukaku there, Belgium suddenly had a presence up front to concern Croatia’s defense, even if he was visibly not fully fit. His lack of match sharpness proved costly when it came to his finishing.

De Bruyne and Lukaku will be back for the European Championship in 2024 and probably the next World Cup in 2026. But the likes of Jan Vertonghen, Toby Alderweireld, Axel Witsel and Dries Mertens might have played their last major tournament.

Maybe even Eden Hazard, who was dropped for the Croatia game and — at the age of 31 — has lost his old powers after so many injuries.

Martinez, who is likely to resume his career as a club coach, said he had more regrets about the loss to Morocco than the draw with Croatia.

“I think today we were ourselves again,” he said.

Croatia was awarded a penalty in the 15th minute when Andrej Kramaric tumbled under the challenge of Yannick Carrasco. The decision was overturned after an offside was spotted on video review, with Modric ready to take the penalty.

Dalić described Josko Gvardiol as the “best defender in the world” after the center back produced a clearance off Lukaku’s bootlaces in the final minutes. “He’s only 20,” Dalić said. “Even if he’s not currently No. 1, he will become No. 1.”

Belgium failed to get out of its group for only the second time in its last eight appearances at the World Cup. The other time was in 1998.