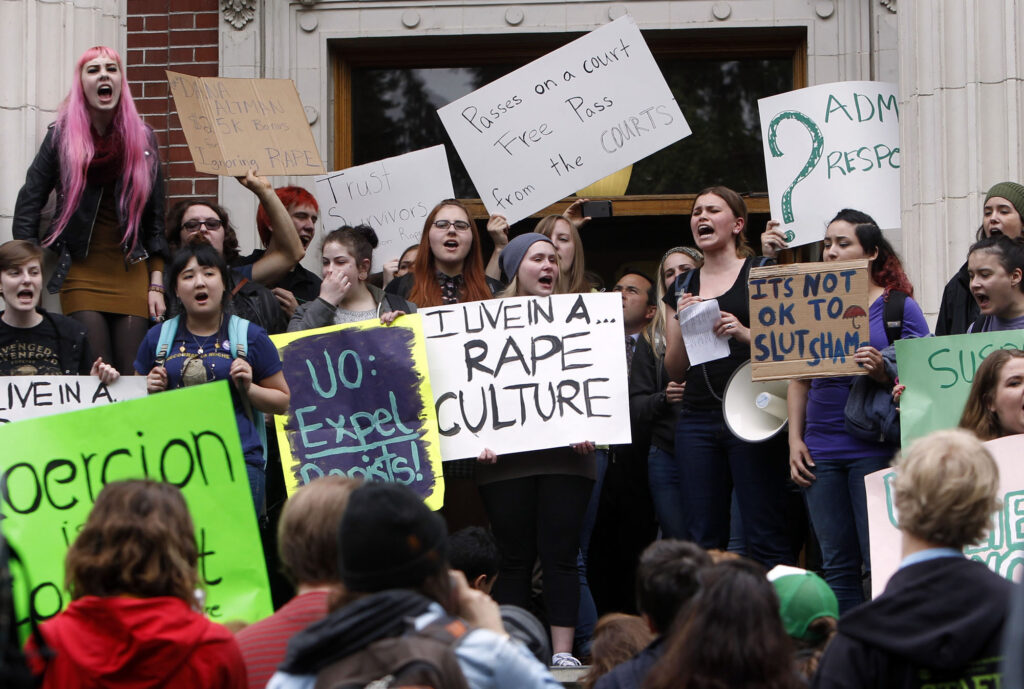 There has been a movement in recent years to toughen up sexual assault laws on college campuses, but there’s also been some pushback since some of them can be unfairly used against men. The Trump administration tried to strike a balance with these interests in mind, but the Biden administration is going to change all that, making the rules far more friendly for accusers. The Associated Press has the story:

Trump-era campus sexual assault rules about to be reversed

MISSION, Kan. (AP) — What Karla Arango says started as a dorm-room sexual assault got even worse as word spread around campus. Her attacker’s fraternity brothers snubbed her, she says, whispering about her in the cafeteria, blocking her phone number and unfriending her on social media. Soon her grades were slipping.

Arango’s experience in her first year at Northern Kentucky University highlights what experts see as deep-seated problems with Title IX, the 1972 federal civil rights law that prohibits sexual discrimination in education. It turns 50 this month.

Heralded as a gamechanger for female college athletes, the law also is supposed to protect sexual assault and harassment accusers like Arango, giving them options like moving dormitories or even getting their attackers removed from the school.

Polarizing regulations passed under former President Donald Trump have discouraged students from coming forward with abuse allegations. Those who do face a live hearing and cross-examination by a person of their alleged attacker’s choosing. The rules also narrowed the definition of sexual harassment and allowed colleges to ignore most cases arising off campus.

President Joe Biden and other critics say the rules, finalized in 2020 by then-Education Secretary Betsy DeVos, fail to adequately protect sexual assault victims, deter them from reporting misconduct and go too far in shielding the accused. Biden is expected to announce new rules as soon as this month.

In the meantime, many students have opted out entirely, never reporting the abuse. Or they’ve chosen to go an informal route, in which the accused might be asked not to take classes with the accuser, or to switch schools — often with no mark on their record.

Arango ultimately decided not to pursue her case, and nothing happened to the other student.

“I felt like my identity was beginning to form, and then it was completely stripped away,” said Arango, now 21 and heading into her senior year. “Everyone just saw me as this girl that was lying about being sexually assaulted. And I was spiraling really bad.”

The Associated Press typically doesn’t identify people who say they have been sexually assaulted, but Arango allowed her name to be used. She serves on a caucus of survivors for End Rape on Campus, a national advocacy group.

Sexual assault is commonplace on college campuses. Thirteen percent of college students overall and nearly 26% of undergraduate women reported nonconsensual sexual contact, according to a 2019 Association of American Universities survey of 181,752 students on 27 campuses. Rates were nearly as high for students who are transgender, nonbinary or otherwise gender nonconforming.

Only about one-third of the female accusers reported what happened, according to the survey. Doing so often ends badly, according to Know Your IX, an advocacy group that has found students who report abuse often leave school, at least temporarily, and are threatened with defamation lawsuits.

“The current process is not really working for anybody,” said Emma Grasso Levine, the manager of Know Your IX.

At some universities, the Trump administration rules have been followed by a decrease in the number of complaints addressed by Title IX offices, according to records provided to The Associated Press.

At the University of Nevada, Las Vegas, 204 Title IX complaints were logged in 2019, but just 12 in 2021, records show. The number of cases that met the criteria for formal investigations fell from 27 to zero in the same period. No student has been found responsible for a Title IX violation at the university since 2020.

At Michigan State University, the number of Title IX complaints dropped from more than 1,300 in 2019 to 56 in 2021. School officials say the drop is the result of narrowed definitions in the 2020 regulations. Complaints that fall outside the scope of the federal rules now go through a similar but separate disciplinary system, officials said.

Arango’s nightmare began in August 2019, when she blacked out after playing a drinking game with her new fraternity friends.

She recalls waking on an air mattress, a male student on top of her, although she had given no consent for the sex. She grabbed her belongings and headed to class, acting like nothing had happened.

She kept quiet until that October, when she told a fraternity friend but swore him to secrecy.

A few days later, she received an email from the Title IX office saying her name had been included in a sexual assault misconduct report. Her friend had shared her secret with the fraternity’s president, who was a resident adviser and required to report it.

The accused student soon found out. His fraternity brothers shunned her as she weighed whether to pursue a Title IX investigation. People were calling her a liar, she said.

Arango asked Title IX officials if the other student would be suspended or sanctioned if she filed a formal complaint. The coordinator told her the process was lengthy and that, if nothing else, she probably could get a no-contact order.

She was skipping two classes to avoid the student and his friends, on track to receive the first two Cs of her life — grades that could threaten her scholarship. Then there was the isolation. “The thing is, no one is talking to me anymore,” she realized.

She put the investigative process on hold. By the time she revisited it in the spring, the pandemic was slowing everything down. Then DeVos’ new regulations were announced.

“Byzantine” is the word attorney Russell Kornblith uses to describe them. He is representing three Harvard University graduate students in a lawsuit alleging that the Ivy League school for years ignored complaints about sexual harassment by a renowned professor.

He said pursuing the cases can be time intensive, distracting students from their classwork. Income disparities often play out, with affluent students able to pay for attorneys and others represented only by themselves. In some cases, accusers find themselves being questioned about their sexual past.

A process that already had seemed rough became overwhelming to Arango.

“I just saw the words ‘cross-examination’ and freaked out,” she recalled. “I was like, ‘I can’t. I can’t put myself through that.’”

As more complaints fall outside its scope, experts have raised alarms that colleges are increasingly judging cases in parallel campus discipline systems that don’t guarantee accusers the same rights as Title IX.

Justin Dillon, a Washington-based lawyer who has defended dozens of students accused of sexual misconduct, called the cross-examination process created under DeVos an “unparalleled success,” but criticized the overall handling of sexual misconduct cases under Title IX.

“It’s just sort of created this kind of sexual police state on college campuses that I think goes far beyond making sure that men and women get equal access to education,” he said.

Students are filing fewer sexual misconduct cases and the bulk of them — upward of 90% — are now being handled informally, said Brett Sokolow, president of the Association of Title IX Administrators. Sometimes the accused will simply agree to transfer so their new school won’t know anything happened, he said.

For all the difficulties colleges have had adjudicating sex assault cases, Title IX at least holds them accountable for protecting the rights of accusers who can otherwise sue, said Maha Ibrahim, a staff attorney with Equal Rights Advocates, a nonprofit that represents survivors.

“What if it wasn’t there? Then what?” she said. “You know, college campuses are just a free for all, a very dangerous place for women and for queer folks. And then what?”

The Associated Press education team receives support from the Carnegie Corporation of New York. The AP is solely responsible for all content.