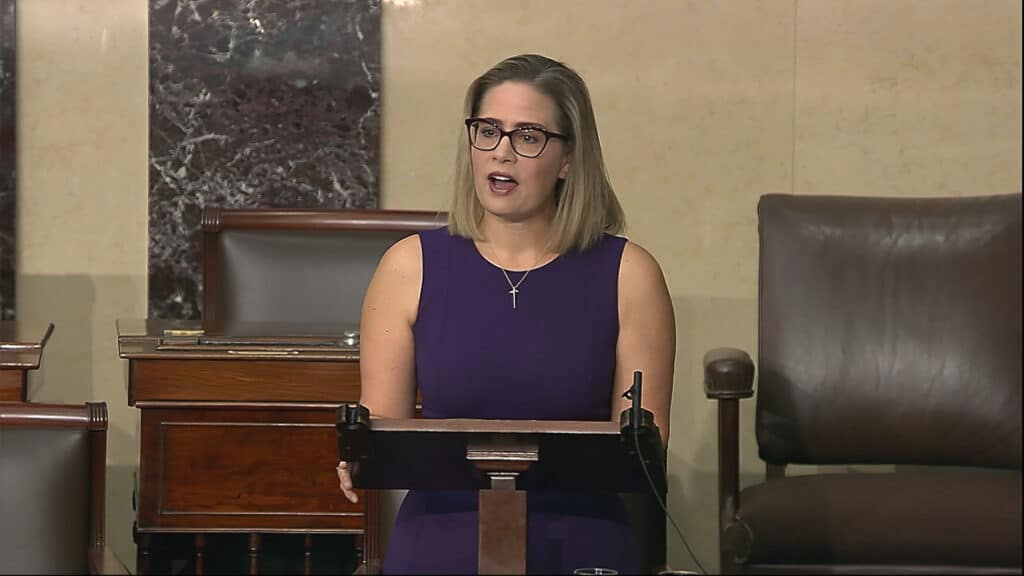 Despite President Joe Biden’s last minute efforts trying to drum up support for the Democrats’ voting legislation, it doesn’t look like it will get past a filibuster since not enough Democrats will agree to change the filibuster rules. Biden appeared to admit this, saying he’s “not sure” whether it will pass. The Associated Press has the story:

WASHINGTON (AP) — All but acknowledging defeat, President Joe Biden said Thursday he’s “not sure” the Democrats’ major elections and voting rights legislation can pass Congress this year. He spoke at the Capitol after a key fellow Democrat, Sen. Kyrsten Sinema of Arizona, dramatically announced her refusal to go along with changing Senate rules to muscle the bill past a Republican filibuster.
Biden had come to the Capitol to prod Democratic senators in a closed-door meeting, but he was not optimistic when he emerged. He vowed to keep fighting for the sweeping legislation that advocates say is vital to protecting elections.
“The honest to God answer is I don’t know whether we can get this done,” Biden said. He told reporters, his voice rising, “As long as I’m in the White House, as long as I’m engaged at all, I’m going to be fighting.”
Sinema all but dashed the bill’s chances minutes earlier, declaring just before Biden arrived on Capitol Hill that she could not support a “short sighted” rules change.
She said in a speech on the Senate floor that the answer to divisiveness in the Senate and in the country is not to change filibuster rules so one party, even hers, can pass controversial bills. “We must address the disease itself, the disease of division, to protect our democracy,” she said.
The moment once again leaves Biden empty-handed after a high-profile visit to Congress. Earlier forays did little to advance his other big priority, the “Build Back Better Act” of social and climate change initiatives. Instead, Biden returned to the White House with his agenda languishing in Congress.

Biden spoke for more than an hour in private with restive Democrats in the Senate, including Joe Manchin of West Virginia, who also opposes changing Senate rules.
Manchin said in a statement later: “Ending the filibuster would be the easy way out. I cannot support such a perilous course for this nation.”
But Manchin and Sinema headed to the White House late Thursday to try to find a way through, according to three people familiar with the discussions who were not authorized to speak publicly and spoke to AP on condition of anonymity.
Since taking control of Congress and the White House last year, Democrats have vowed to counteract a wave of new state laws, inspired by former President Donald Trump’s false claims of a stolen election, that have made it harder to vote. But their efforts have stalled in the narrowly divided Senate, where they lack the 60 votes out of 100 to overcome a Republican filibuster.
For weeks, Sinema and Manchin have come under intense pressure to support rules changes that would allow the party to pass their legislation with a simple majority — a step both have long opposed.
Though Trump and other Republicans also pressed for filibuster changes when he was president, Senate Minority Leader Mitch McConnell, R-Ky., called Sinema’s speech an important act of “political courage” that could “save the Senate as an institution.”
Her own colleagues weren’t as charitable.
But Sen. Angus King, a Maine independent who once opposed changing the Senate rules, said, “The path forward is very difficult, particularly based upon Sen. Sinema’s statement today.” He said, “She believes that the risk of changing the filibuster is greater than the risk of what’s going on in the states. I hope profoundly that she’s right. I fear that she’s wrong.”
The Democratic package of voting and ethics legislation would usher in the biggest overhaul of U.S. elections in a generation, striking down hurdles to voting enacted in the name of election security, reducing the influence of big money in politics and limiting partisan influence over the drawing of congressional districts. The package would create national election standards that would trump the state-level GOP laws. It would also restore the ability of the Justice Department to police election laws in states with a history of discrimination.
Biden’s trip to the Capitol, where he served for decades as a senator from Delaware, was part of week-long effort to jolt the stalled bill. On Tuesday he gave a fiery speech in Atlanta, likening opponents of the legislation to racist historical figures and telling lawmakers they will be “judged by history.”
Republicans are nearly unanimous in opposing the legislation, viewing it as federal overreach that would infringe on states’ abilities to conduct their own elections. And they’ve pointed out that Democrats opposed changes to the filibuster that Trump sought when he was president.
But for Democrats and Biden, the legislation is viewed as a political imperative. Failure to pass it would break a major campaign promise to Black voters, who helped hand Democrats control of the White House and Congress, and would come just before midterm elections when slim Democratic majorities will be on the line.
Democrats have still pledged to force a public showdown over the bill on the Senate floor, which could stretch for days and carry echoes of civil rights battles a generation ago that led to some of the most famous filibusters in Senate history.
Schumer had initially set the Martin Luther King Jr. holiday, on Jan. 17, as a deadline to either pass the voting legislation or consider revising the filibuster rules.
But Democrats shifted their strategy as they sought to pressure Manchin and Sinema. Under their new approach, which uses a procedural shortcut, they will be able to debate the bill without being blocked by a filibuster — a feat after Republicans used the filibuster four times in recent months to stop deliberation.
The mechanics work like this: The House amended an unrelated bill that was already approved by both chambers of Congress, combining Democrats voting proposals into one bill. After the House passed that bill Thursday, the Senate can debate it with a simple majority. But Senate Republicans can still block them from holding a final vote.
Democratic Sen. Raphael Warnock questioned the wisdom of reflexively seeking bipartisanship.
“It can’t be the only important thing,” said Warnock, who is Georgia’s first Black senator. “Slavery was bipartisan. Jim Crow segregation was bipartisan. The denial of women’s suffrage was bipartisan.”
“You know what wasn’t bipartisan? Passage of the 13th Amendment,” he said, the constitutional amendment that abolished slavery.