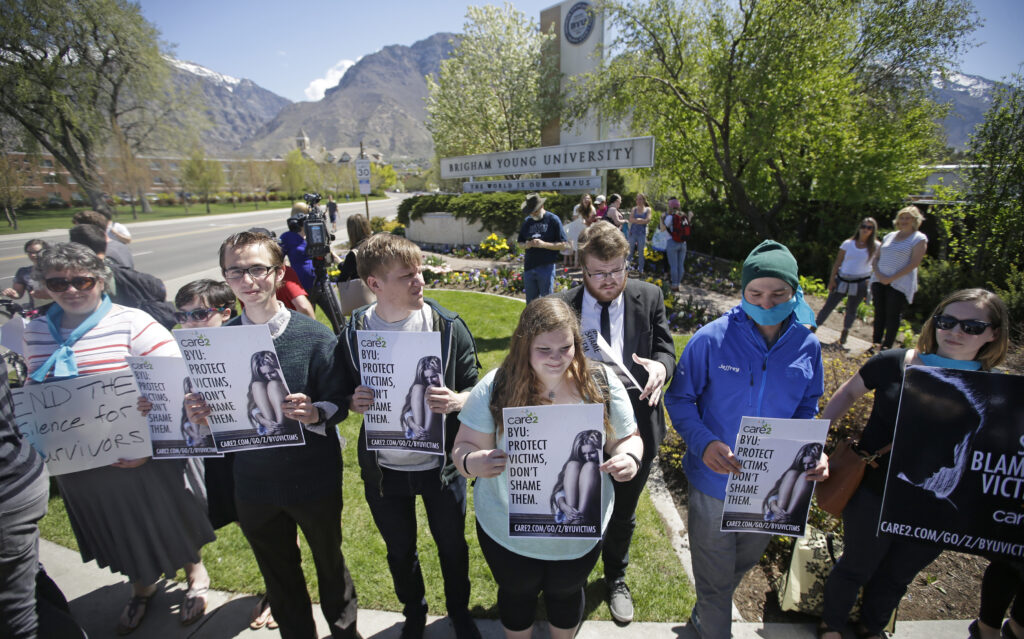 On the 50th anniversary of the Title IX women’s rights law, the Biden administration is changing rules on LGBTQ students and campus sexual assault. There will be a public feedback period before the administration can finalize any changes, meaning the earliest that the policy is likely to take effect is next year. The Associated Press has the story:

Biden expands Title IX beyond women to include LGBTQ

(AP) The rights of LGBTQ students would become enshrined in federal law and victims of campus sexual assault would gain new protections under new rules proposed by the Biden administration on Thursday.

The proposal, announced on the 50th anniversary of the Title IX women’s rights law, is intended to replace a set of controversial rules issued during the Trump administration by Education Secretary Betsy DeVos.

President Joe Biden’s education secretary, Miguel Cardona, said that even though there have been significant strides toward gender equality, discrimination and sexual violence persist.

“Even as we celebrate all the progress we’ve achieved, standing up for equal access and inclusion is as important as ever before,” he said.

The proposal is almost certain to be challenged by conservatives, and it is expected to lead to new legal battles over the rights of transgender students in schools, especially in sports. It now faces a public feedback period before the administration can finalize any changes, meaning the earliest that the policy is likely to take effect is next year.

The step meets a demand from victims rights advocates who wanted Biden to release new rules no later than the anniversary of Title IX, which outlaws discrimination based on sex in schools and colleges. Advocates say DeVos’ rules have gone too far in protecting students accused of sexual misconduct, at the expense of victims.

As a presidential candidate, Biden had promised a quick end to DeVos’ rules, saying they would “shame and silence survivors.”

In announcing its proposal, Biden’s Education Department said DeVos’ rules “weakened protections for survivors of sexual assault and diminished the promise of an education free from discrimination.”

For the first time, the rules would formally protect LGBTQ students under Title IX. Nothing in the 1972 law explicitly addresses the topic, but the new proposal would clarify that the law applies to discrimination based on sexual orientation and gender identity.

It would make clear that “preventing someone from participating in school programs and activities consistent with their gender identity would cause harm in violation of Title IX,” according to the department. More specific rules dealing with the rights of transgender students in school sports will be released later, the department said.

“As we look to the next 50 years, I am committed to protecting this progress and working to achieve full equality, inclusion, and dignity for women and girls, LGBTQI+ Americans, all students, and all Americans,” he said in a statement.

Many of the proposed changes would restore Obama-era rules that DeVos’ policy replaced.

The definition of sexual harassment would be expanded to cover a wider range of misconduct. Schools would be required to address any allegation that creates a “hostile environment” for students, even if the misconduct arises off campus. Most college employees, including professors and coaches, would be required to notify campus officials if they learn of potential sex discrimination.

In a victory for victims rights advocates, the proposal would eliminate a rule requiring colleges to hold live hearings to investigate sexual misconduct cases — one of the most divisive aspects of DeVos’ policy. Live hearings would be allowed under the new policy, but colleges could also appoint campus officials to question students separately.

“These proposed regulations demonstrate a strong commitment to protecting educational opportunities for all students including LGBTQ students,” said Janson Wu executive director of Gay and Lesbian Advocates and Defenders. “Especially in light of ongoing state legislative attacks, we are grateful for the administration’s strong support of LGBTQ youth.”

Republicans in Congress were quick to denounce the proposal. Rep. Virginia Foxx of North Carolina, the top Republican on the House Education and Labor Committee, said the rules will “demolish due process rights and the safety of young women and girls across the country, with promised regulations still to come to undermine women’s access to athletic opportunities.”

If the proposal is finalized, it would mark the second rewrite of federal Title IX rules in two years. DeVos’ rules were themselves intended to reverse Obama-era guidance. The Obama policy was embraced by victims advocates but led to hundreds of lawsuits from accused students who said their colleges failed to give them a fair process to defend themselves.

The whiplash has left many schools scrambling to adopt ever-changing rules. Some have pressed for a political middle ground that will protect students without prompting new rules every time the White House changes power.

“It doesn’t serve anybody’s interest to have this ping-pong effect of changing rules every five years,” said S. Daniel Carter, a campus security consultant and president of Safety Advisors for Educational Campuses. “That’s just not a good way to get things done. It’s very difficult for everyone involved.”

DeVos’ rules dramatically reshaped the way colleges handle allegations of sexual assault and harassment, with an emphasis on ensuring the constitutional due process rights of the accused.

Under her rules, accused students were given wider rights to review and respond to evidence against them, and students had the right to cross-examine one another through a representative at live hearings.

The live hearing requirement was applauded as a victory for accused students, but it drew intense backlash from other advocates who said it forced victims to relive their trauma.

DeVos also reduced colleges’ obligations in responding to complaints. Her policy narrowed the definition of harassment and scaled back the types of cases colleges are required to address. As a result, some campuses have seen steep decreases in the number of Title IX complaints coming in from students.

Under her rules, for example, colleges are not required to investigate most complaints that arise off campus, and they do not have to act on any complaint unless the alleged misconduct is “severe, pervasive and objectively offensive.”

The overhaul was partly meant to lighten the burden on colleges as they mediate complex cases, but some say it ultimately added more work.

Leaders of some colleges have said the DeVos rules are too prescriptive and force them to turn campus discipline systems into miniature courtrooms. Many schools have continued to address all sexual misconduct complaints even if they do not meet the narrowed harassment definition, but they have had to set up separate discipline processes to handle those cases.

Advocates on both sides say that can be confusing for students.

“It shouldn’t be that way. It should be, if anything, more uniform — that’s the whole reason the Title IX regulations were put into place,” said Kimberly Lau, a New York lawyer who represents students in Title IX cases

Biden’s proposal is a major step in keeping his promise to reverse DeVos’ rules. He started the process last year when he ordered the Education Department to review the rules, but the agency has been bogged down by a slow-moving rule-making process.

The Associated Press education team receives support from the Carnegie Corporation of New York. The AP is solely responsible for all content.