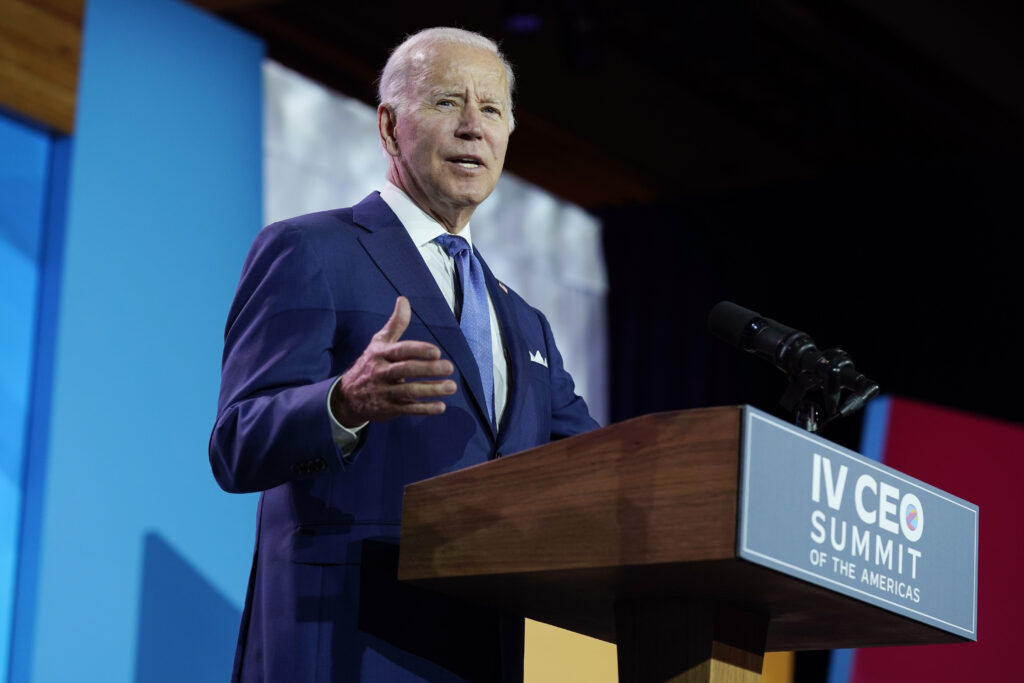 The Port of Los Angeles is a great backdrop for a president to give a speech about America’s economic strength, and progress going forward, only President Biden is still scratching his head as to why there is such high inflation, and why his fiddling with the economy is not working, all he needs to do is go look in the mirror for the answers. The port moved to round-the-clock operations last October under an agreement that the White House brought about, the goal was to lessen the backlog of supplies waiting to come into the country, a backlog created by the Biden administration. As reported by the AP:

The port is now moving out a record 200,000 containers on a rolling 30-day average, but inflation is putting a crimp in operations

LOS ANGELES (AP) — The Port of Los Angeles is a testament to President Joe Biden’s unrewarded efforts to address what he calls his top economic priority: inflation.

Biden will speak at the port, America’s busiest, on Friday with inflation persisting as a problem that has eluded his policy tweaks, deals brokered with the private sector, infrastructure spending and regulatory actions.

The port moved to round-the-clock operations last October under an agreement that the White House helped to shepherd. The goal was to remove backlogs of ships waiting to dock and containers waiting to flow into the country, a logjam that was pumping up prices as the world began to recover from the coronavirus pandemic.

The port is now moving out a record 200,000 containers on a rolling 30-day average. But the forces driving inflation have shifted to rising energy and food costs in the aftermath of Russia’s invasion of Ukraine.

The Democratic president’s speech will overlap with the release of the consumer price index for May, a key measure of inflation. Economists surveyed by the data firm FactSet expect inflation rose at a yearly rate of 8.2%, only slightly below the 40-year peak of 8.5% set in March. The new report could be paired with average U.S. gasoline prices climbing above $5 a gallon, a nominal record that is hurting Biden’s public approval ahead of the midterm elections.

Gene Seroka, executive director of the Port of Los Angeles, said there were many levers that caused performance to improve in terms of getting goods to consumers and businesses faster. But he specifically credited the “convening powers of the federal government to bring people to the table” and the Biden administration’s focus on the supply chain.

“We’ve reduced those ships that have been waiting to get into the port by 75% this year,” Seroka said. “These guys are really working because we’ve got strong consumer demand still.”

The strong consumer demand has been a mixed blessing for Biden. It reflects the robust job growth and solid household balance sheets that followed the $1.9 trillion coronavirus relief package passed last year. But demand has consistently outpaced supply, causing prices to rise to levels that are forcing the Federal Reserve to try to slow growth and possibly risk a recession.

The White House said that Biden planned to say in his Friday remarks that the U.S. can tackle inflation without stumbling into a downturn. That’s because the economy is so strong with its 3.6% unemployment rate that it can withstand a slowdown.

The president will also seek to frame inflation as a global challenge, having been triggered first by the pandemic and then by Russia’s invasion of Ukraine. Biden is attempting to rebut criticism by Republican lawmakers that inflation was the result of his government aid being too generous and his restrictions on U.S. oil production too onerous.

Biden has attempted to slow inflation by improving port operations and twice releasing oil from the U.S. strategic reserve, in addition to other regulatory initiatives and a domestic agenda that includes budget deficit reduction and would need congressional approval.

Before inflation became an economic and political threat, Biden had stressed that his key goal was improving the lives of middle-class workers. That could be put to the test as the union contract for the port expires on July 1 and workers try to increase their incomes and benefits.

The workers will continue to do their jobs after the contract expires, and it’s rare for a new contract to be reached ahead of time, said Jennifer Sargent Bokaie, communications director for the Coast Longshore Division of the International Longshore and Warehouse Union. She said there is an agreement between the union and the Pacific Maritime Association, which represents the port, to not discuss the status of contract negotiations with the news media.

The visit to the port occurs as Biden has been hosting the Summit of the Americas in Los Angeles. On Friday, he will also announce a declaration on migration and hold a working luncheon with the heads of government and state attending the conference for nations in the Western Hemisphere.

And mindful of the campaign season, Biden on Friday will attend two fundraising receptions for the Democratic National Committee.

By CHRIS MEGERIAN and JOSH BOAK