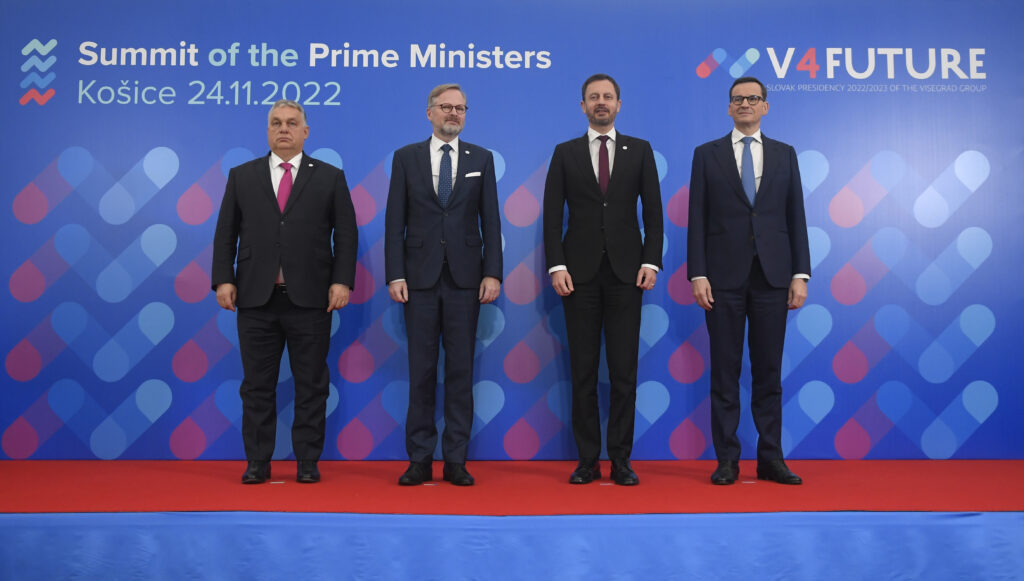 The leaders of four Central European countries have emphasized issues that tie them together and downplayed those that have caused divisions during a summit in Slovakia. The only shocking statement came from the Hungarian Prime Minister Victor Orban, who said that he will continue to block a European Union plan to provide Ukraine with an aid package worth 18 billion euros ($18.7 billion) in 2023. The Associated Press has the story:

The leaders of four Central European countries meeting in a regional summit in Slovakia Thursday emphasized the issues that tie them together and downplayed divisive ones.

The prime ministers of the Visegrad Four countries — Poland, the Czech Republic, Slovakia and Hungary — met after fault lines appeared in the regional bloc over Hungary’s approach to the war in Ukraine, which its V4 partners have perceived as overly conciliatory toward Russia.

While acknowledging significant differences of opinion on how to assist Ukraine and punish Russia for its invasion, the leaders said shared interests like energy security, illegal immigration and border protection formed a basis for future V4 cooperation.

At a news conference following the meeting in Kosice, Slovakia, Hungarian Prime Minister Viktor Orban said that while he agreed with his counterparts that Russia must not be allowed to represent a threat to European security, he will c ontinue to block a European Union plan to provide Ukraine with an aid package worth 18 billion euros ($18.7 billion) in 2023.

Instead, the populist leader said, Hungary would provide aid on a bilateral basis to its eastern neighbor.

“The Hungarian government has already set aside the amount it’s responsible for in our budget, and we’re going to give that money to the Ukrainians,” Orban said. “But we are not going to support any kind of solution that would drive the European Union into joint debt.”

The relationship between Orban and his counterparts seemed icy before the meeting even began. Before departing for the V4 summit, Czech Prime Minister Petr Fiala said that the grouping has seen better days, particularly due to Hungary’s conduct since Russian invaded Ukraine on Feb. 24.

Budapest has broken with its regional partners by refusing to provide weapons to Ukraine or allowing their transfer across Hungary’s borders, opposing EU sanctions against Russia and pursuing further energy deals with Moscow even as most of Europe seeks to wean itself off Russian oil and gas.

“I think it’s no secret, and anyone can see it, that the V4 countries … aren’t experiencing the best of times,” Fiala told reporters in Prague. “Hungary’s different positions significantly contribute to this situation and significantly complicate it.”

Upon arriving at the meeting in Kosice, Slovakia’s Prime Minister Eduard Heger presented Orban with a scarf of Slovakia’s national soccer team. It was a thinly-veiled reference to a controversy Orban sparked last week after appearing in a video wearing a scarf depicting “Greater Hungary,” the borders of the historical Hungarian kingdom that contained almost all of what is today Slovakia and large parts of other neighboring countries.

“I noticed that Viktor Orban has an old scarf, so I gave him a new one today,” Heger wrote on Facebook alongside a picture of himself and Orban with the scarf draped over their shoulders.

Prime ministers Fiala, Heger and Polish leader Mateusz Morawiecki each noted during the news conference that they had urged Orban to ratify the NATO accession process of Finland and Sweden as soon as possible, and said he had assured them that Hungary’s parliament would vote on the measure soon.

Hungary is the only NATO member other than Turkey which has still not ratified the accession of the two Nordic countries into the military alliance, frustrating some allies who believe quickly accepting the countries is a security priority amid the war in Ukraine.

Yet while it was expected that Hungary would ratify the two NATO bids before the end of the autumn parliamentary session in early December, Orban said his legislature would take up the matter early next year, “as the other three prime ministers of the V4 have asked Hungary to do.”

“We have already confirmed to both Finland and Sweden that Hungary supports the membership of these two countries in NATO,” he said. “The Swedes and the Finns have not lost a single minute of membership because of Hungary, and Hungary will certainly give them the support they need to join.”

Hungary’s delay in holding the NATO vote has caused speculation that Budapest is using the issue to exert leverage on the EU, which has frozen billions in financial support to Hungary over fears that Orban has overseen a systematic erosion of democratic standards and allowed the widespread misuse of EU funds.

The European Commission, the bloc’s executive arm, could soon recommend that some 7.5 billion euros be withheld from Hungary unless it fulfills a raft of reforms aimed at protecting EU funds from misuse, increasing judicial independence and strengthening legislative transparency.

But EU lawmakers are not convinced that the reforms Hungary has promised are sufficient. In a resolution passed on Thursday by the European Parliament, lawmakers said the reforms pledged to date are “not sufficient to address the existing systemic risk to the EU’s financial interests,” and urged the continued withholding of funds “to protect the EU budget against breaches of the principles of the rule of law in Hungary.”

The EU legislature also recommended not approving the release of further billions in pandemic recovery aid until Hungary’s government fully complies with all rule-of-law recommendations.

Yet in response to a press question on Thursday, Orban said negotiations with the European Commission were “going well,” and that his government was awaiting a final decision from the executive.

“We’ve done everything that we committed to and that we agreed on,” he said.