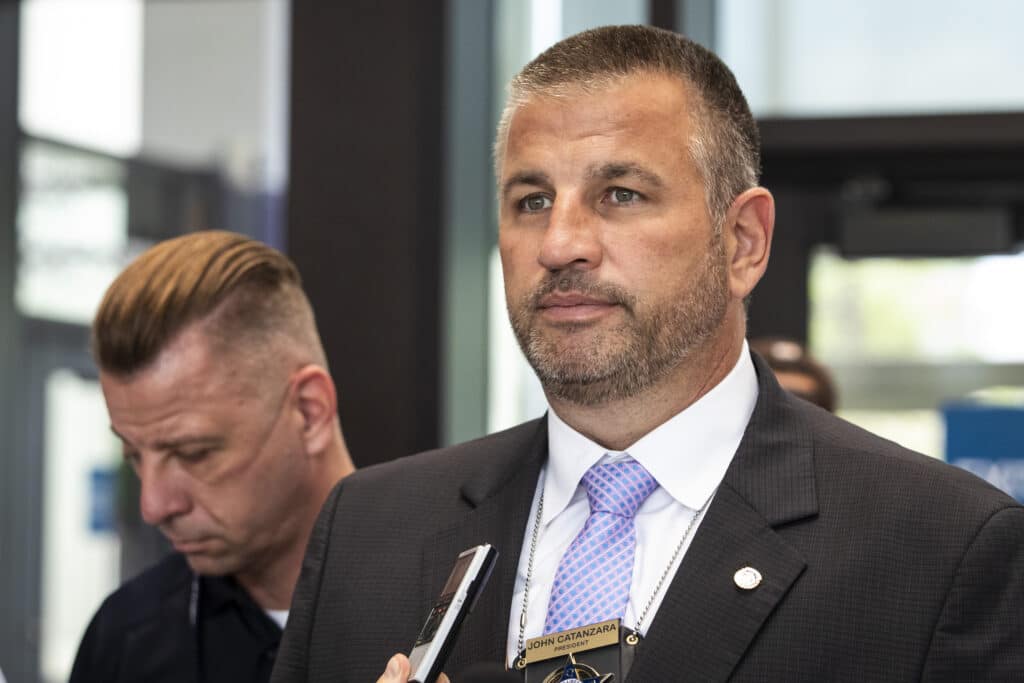 John Catanzara, the president of the Fraternal Order of Police in Chicago, told officers to file for exemptions to receiving the COVID-19 vaccine but to not enter that information into the city’s vaccine portal. He says he will take the city to court if they attempt to enforce the mandate. The Associated Press has the story:

CHICAGO (AP) — The head of the Chicago police officers union has called on its members to defy the city’s requirement to report their COVID-19 vaccination status by Friday or be placed on unpaid leave.

In the video posted online Tuesday and first reported by the Chicago Sun-Times, Fraternal Order of Police President John Catanzara vowed to take Mayor Lori Lightfoot’s administration to court if it tries to enforce the mandate, which requires city workers to report their vaccine status by the end of the work week. After Friday, unvaccinated workers who won’t submit to semiweekly coronavirus testing will be placed on unpaid leave.

Catanzara suggested that if the city does enforce its requirement and many union members refuse to comply with it, “It’s safe to say that the city of Chicago will have a police force at 50% or less for this weekend coming up.”

In the video, Catanzara instructs officers to file for exemptions to receiving the vaccine but to not enter that information into the city’s vaccine portal.

He said that although he has made clear his vaccine status, “I do not believe the city has the authority to mandate that to anybody, let alone that information about your medical history.”

During a news conference Wednesday, Lightfoot accused Cantazara of spreading false information and dismissed most of his statements as “untrue or patently false.” She said COVID-19 vaccines are proven to be effective and that getting vaccinated would protect city workers and their families.

“What we’re focused on is making sure that we maximize the opportunity to create a very safe workplace,” Lightfoot said. “The data is very clear. It is unfortunate that the FOP leadership has chosen to put out a counter narrative. But the fact of the matter is, if you are not vaccinated, you are playing with your life, the life of your family, the life of your colleagues and members of the public.”

She said the city is prepared to deal with any fallout related to the vaccination requirement.

Violent crime has spiked in the city this year, from expressway shootings to a rise in carjackings. Chicago police reported 629 homicides this year through early October, compared with 605 during the same period last year and 402 in the same time frame in 2019.

First responders around the country have been hit hard by the virus but have been resisting vaccine mandates. More than 460 law enforcement officers have died of COVID-19, including four members of the Chicago Police Department, according the Officer Down Memorial Page. On Tuesday, Dean Angelo, who once held Catanzara’s union position, died of the disease.

Los Angeles police and county sheriff, and Seattle police are among the departments either under vaccine mandates or facing one.

Catanzara has clashed with the mayor over a host of issues. After the city announced the vaccine mandate in August, the union head compared it to something that might happen to Nazi Germany, telling the Sun-Times, “This ain’t Nazi … Germany (saying) ‘Step into the … showers, the pills won’t hurt you.'”

Lightfoot blasted Catanzara for his “offensive outburst” and Catanzara posted a video on the union’s YouTube channel apologizing for his choice of words, saying he was not trying to link vaccinations to what happened during the Holocaust.