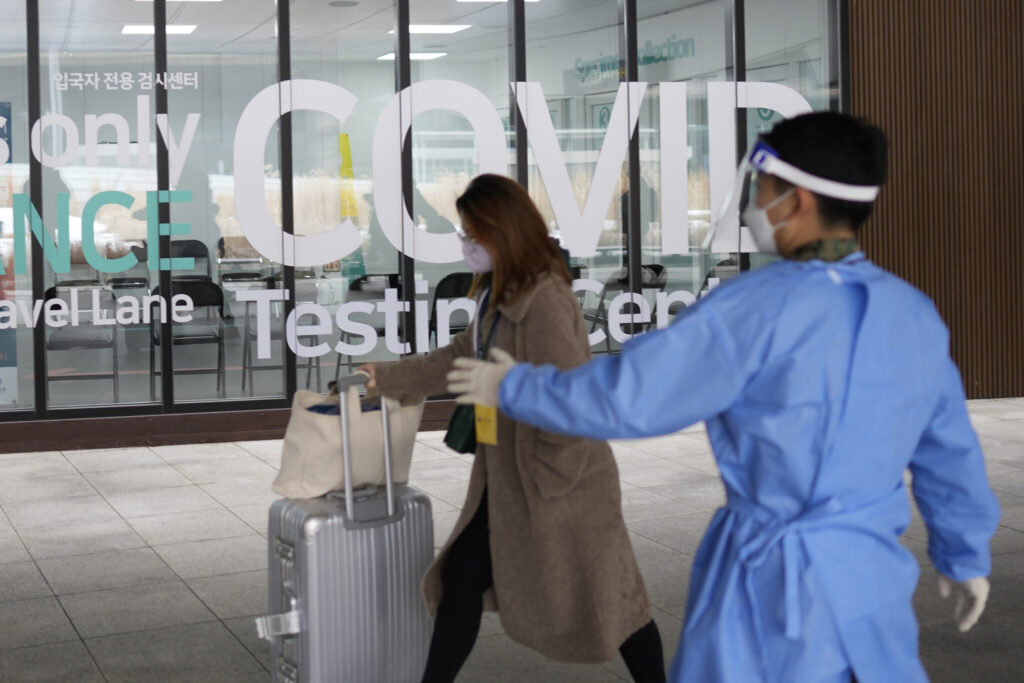 China suspended issuing short-term visas in South Korea and Japan on Tuesday, after announcing it would retaliate against countries that required negative COVID-19 tests from Chinese travelers. The embassies in Tokyo and Seoul announced the suspensions in brief online notices. The Associated Press has the story:

Chinese embassies suspended issuing new visas for South Koreans and Japanese on Tuesday in apparent retaliation for COVID-19 testing requirements recently imposed by those countries on travelers from China.

The embassies in Tokyo and Seoul announced the suspensions in brief online notices.

The Seoul notice, posted on the embassy’s WeChat social media account, said the ban would continue until South Korea lifts its “discriminatory entry measures” against China. The announcement covered tourist, business and some other visas.

China’s Foreign Ministry threatened countermeasures last week against countries that had announced new virus testing requirements for travelers from China. At least 10 in Europe, North America and Asia have done so recently, with officials expressing concern about a lack of information about rapidly spreading virus outbreaks in China.

It wasn’t clear why South Korea and Japan were targeted, and whether the suspensions would be expanded to other countries that have imposed virus testing on passengers from China.

China’s embassy in Tokyo said only that visa issuance had been suspended. The announcements appeared to apply only to new applicants, with nothing about people currently holding visas.

South Korea’s Foreign Ministry said in a statement that “our government’s step to strengthen anti-virus measures on passengers arriving from China is based on scientific and objective evidence. We have provided information to the international community in a transparent manner and we have communicated with the Chinese side in advance.”

A Japanese Foreign Ministry official said earlier that it would be “regrettable” if restrictions were imposed. The official spoke on customary condition of anonymity.

Business groups had warned earlier that global companies were shifting investment plans away from China because it was too hard for foreign executives to visit under the pandemic controls. A handful of foreign auto and other executives have visited China over the past three years, but many companies have relied on Chinese employees or managers already in the country to run their operations.

A South Korean restaurant owner in Beijing said the announcement forced friends to postpone plans to visit China. He spoke on condition of anonymity out of concern his business might be affected. He added that he is preparing to renew his Chinese work visa and doesn’t know whether that will be affected.

In a phone call on Monday before the visa suspension was announced, Chinese Foreign Minister Qin Gang “expressed concern” about the measures taken by South Korea to his counterpart, Foreign Minister Park Jin. Qin said he “hopes that the South Korean side will uphold an objective and scientific attitude.”

China’s move appeared to be grounded in its demands that its citizens be treated the same as those of other countries. About a dozen countries have followed the U.S. in requiring either a negative test before departing China, a virus test on arrival at the airport, or both.

He did not respond directly when asked if new visas had been suspended for South Koreans and Japanese, saying only that he had “made it very clear.”

The World Health Organization and several nations have accused China of withholding data on its outbreak. A WHO official said Tuesday that t he agency sees no immediate threat for the European region from China’s outbreak, but that more information is needed.

China’s ambassador to Australia said the response of those nations to China’s COVID-19 outbreak hadn’t been proportionate or constructive.

Xiao Qian told reporters in Canberra that China had shifted its strategy late last year from preventing infections to preventing severe cases. He said countries should use a science-based response.

China fought on the side of North Korea in the 1950-1953 war and has remained a supporter of the North despite its missile launches and nuclear tests, and has opposed further sanctions against Kim Jong Un’s government.

China abruptly reversed its strict pandemic containment requirements last month in response to what it says was the changing nature of the outbreak. That came after three years of lockdowns, quarantines and mass testing that prompted rare politically tinged protests in the streets in Beijing and other major cities.

The most optimistic forecasts say China’s business and consumer activity might revive as early as the first quarter of this year. But before that happens, entrepreneurs and families face a painful squeeze from a surge in virus cases that has left employers without enough healthy workers and kept wary customers away from shopping malls, restaurants, hair salons and gyms.

The decision by Xi’s government to end controls that shut down factories and kept millions of people at home will move up the timeline for economic recovery but might disrupt activity this year as businesses scramble to adapt, forecasters say.

China is now facing a surge in cases and hospitalizations in major cities and is bracing for a further spread into less developed areas with the start of the Lunar New Year travel rush, set to accelerate in the coming days. While international flights are still reduced, authorities say they expect domestic rail and air journeys will double over the same period last year.