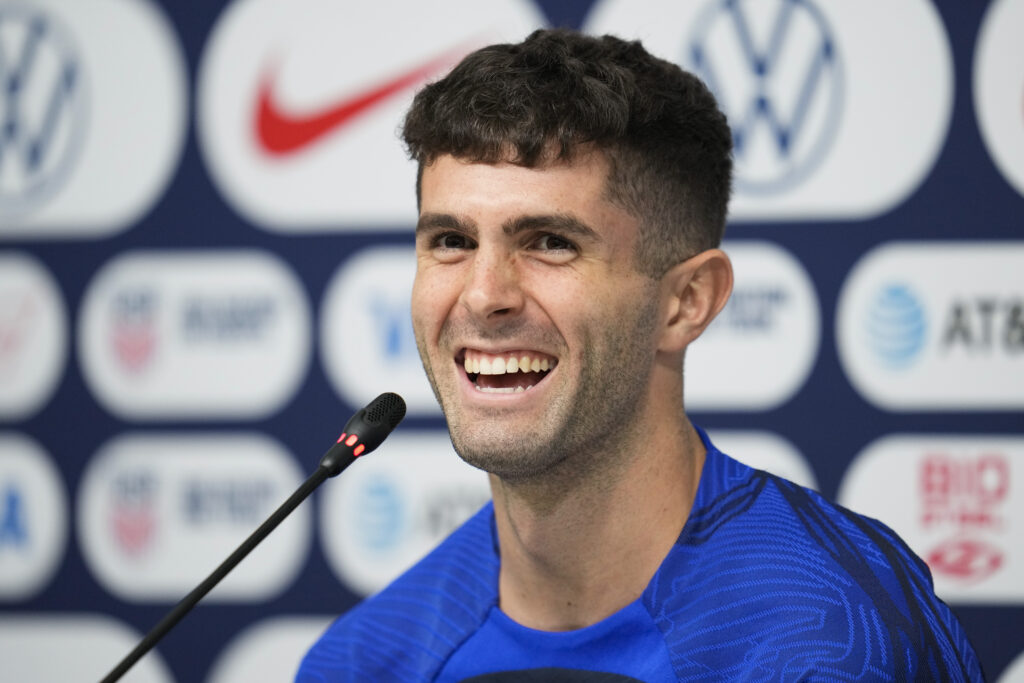 Christian Pulisic scored while crashing headfirst into the goalkeeper in the 38th minute and the United States advanced to the knockout round of the World Cup with a 1-0 win over Iran in a politically charged rematch of their famous meeting a quarter-century ago. The Associated Press has the story:

Having scored the winning goal for the United States against Iran, Christian Pulisic watched the final minutes from a hospital on a mobile phone.

“They were checking my blood sugar and everything and it was flying through the roof,” the U.S. star recalled Thursday, “but it wasn’t because of anything. It was just me stressed watching the game. But once I got through that and the final whistle blew, I was obviously very happy.”

Pulisic hopes to play against the Netherlands in the round of 16 at the World Cup on Saturday after bruising his pelvic bone when he collided with goalkeeper Alireza Beiranvand while scoring in the 38th minute of the Americans’ 1-0 win Tuesday.

“I will do everything in my power to work with this medical team and make sure that I can play,” he said during a news conference, sitting next to teammate Tim Weah.

Pulisic said he took a knee to the pelvic bone and not the genitals.

“It was very painful,” he recalled. “That bone is there for a reason, to protect you, I think, I hit it well. It was sore, but like I said, I’m getting better.”

Pulisic was down on the field for about three minutes before he re-entered the game and finished the first half. He was replaced by Brenden Aaronson at the start of the second half and was taken to Hamad General Hospital, accompanied by athletic trainer Harris Patel.

“This team helps me so much to take the pressure off of me,” Pulisic said. “A couple of years ago, there were times where maybe I felt like I needed to do more. But with these guys I don’t feel that way at all, to be honest. I know they have my back.”

If the U.S. beats the Netherlands, they would reach the quarterfinals for the first time since 2002 and face Argentina or Australia. Players realize each of their games has been viewed by 10 million to 20 million on U.S. television.

“I hope that they can see just the unity and the team spirit that we display. I hope that what’s helping us gain fans,” Pulisic said.

“You can see all the individual talent — we have guys playing at top clubs across the world, but without the brotherhood, without this family aspect, we wouldn’t be in this position,” he added.

Pulisic and Tim Weah were asked by a Dutch reporter how big the World Cup was for people in the U.S.

“It’s the biggest sport now,” said Weah, a son of former FIFA Player of the Year and current Liberia President George Weah. “We’re on a stage and it’s our job to make sure they know that this is sport we play, and I think everyone back home is realizing the team has talent.”

Pulisic downplayed comparisons between his goal against Iran and Landon Donovan’s iconic moment, an injury-time goal against Algeria in 2010 that advanced the Americans to the knockout stage.

“I’m hoping I haven’t had that moment yet, to be honest,” Pulisic said. “I’m hoping it’s in front of me.”

Forward Josh Sargent has right ankle soreness after a challenge late in the second half against Iran.

A Dutch reporter reminded Pulisic that before he signed with Borussia Dortmund in 2015 at age 16, he trained at PSV Eindhoven with Cody Gakpo, a forward on the Netherlands national team who has scored three goals at the World Cup.

“Oh, wow. I never put that together,” Pulisic said.