Climate debate over role of oil in ‘going green’ at Davos 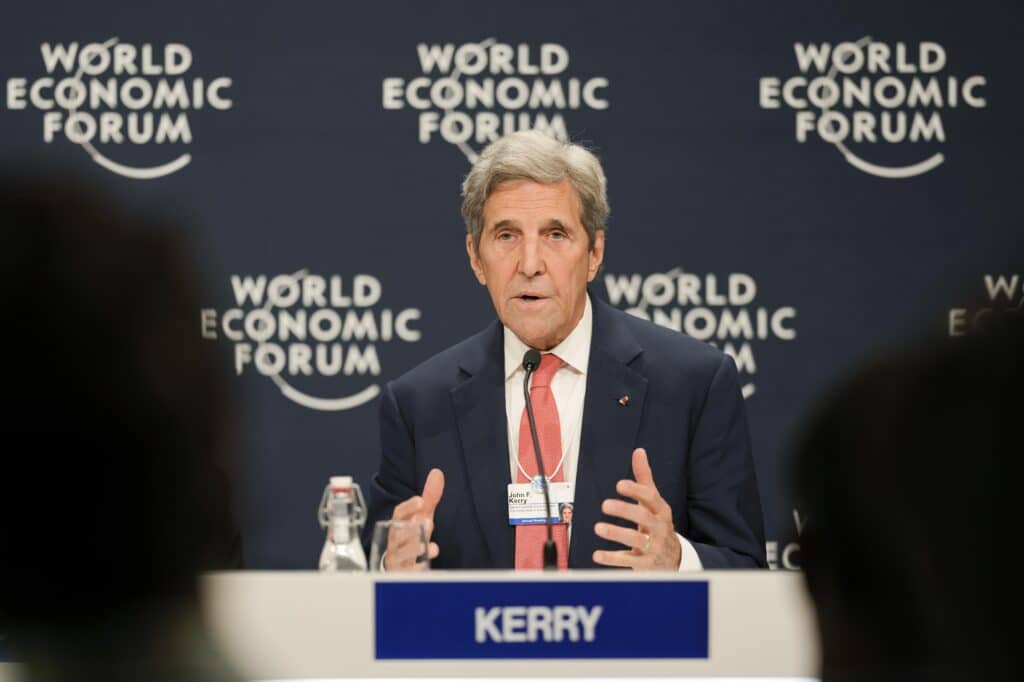 The big climate question at Davos is to what extent can oil and gas companies be part of a transition to lower-carbon fuels? Because they are going to have to be part of the big picture, in finding new ways to make oil and gas usage more green, find other fuels, or make existing machinery that uses oil and gas burn that fuel more efficiently, these are all questions facing world leaders and industry executives. The fact is that products from oil are a daily part of lives in the world, and right now if all fossil fuels were banned in favor of green substitutes, the world as we know it would grind to a loud screeching halt. As reported by the AP:

U.S. climate envoy John Kerry said that it was possible to both meet the need of increased energy from fossil fuels in the short-term, and stay on course to reduce emissions over the coming years

DAVOS, Switzerland (AP) — As government officials, corporate leaders, and other elites at the World Economic Forum grapple with how to confront climate change and its devastating effects, a central question is emerging: to what extent can oil and gas companies be part of a transition to lower-carbon fuels?

In different times the question could have been academic, the kind of thing critics of the forum, which takes place in a tony ski village in the Swiss Alps, would say had no relevance to the real world. But today, the question is both practical and urgent, as Russia’s invasion of Ukraine has forced many countries that depended on Russian oil and gas to make swift changes to energy supplies.

The debate comes as examples of acutely felt impacts of climate change multiply, including recent heat waves in Southeast Asia to flooding in parts of South America. Meanwhile, the world’s top climate scientists have repeatedly warned that increased investment in fossil fuels are hurting chances to keep warming to limit warming to 1.5 C (2.7 F), and thus avoid even more devastating effects.

“We should not allow a false narrative to be created that what has happened in Ukraine somehow obviates the need to move forward and address the climate crisis,” said U.S. climate envoy John Kerry on Tuesday, speaking on a panel about the “net zero” goal.

Kerry added that it was possible to both meet the need of increased energy from fossil fuels in the short-term, particularly in Europe, and stay on course to reduce emissions over the coming years.

Meanwhile, European Commission president Ursula von der Leyen made a different argument to urgently move toward renewable energies: she warned the 27-nation bloc should avoid becoming dependent on untrustworthy countries, like it did with fossil fuels from Russia, as it moves toward a greener economy.

She said the “economies of the future” will no longer rely on oil and coal, but the green and digital transitions will rely on other materials like lithium, silicon metal or rare earth permanent magnets which are required for batteries, chips, electric vehicles, or wind turbines.

“For many of them, we rely on a handful of producers in the world. So, we must avoid falling into the same trap as with oil and gas. We should not replace old dependencies with new ones.”

Von der Leyen added that the war in Ukraine has strengthened Europe’s determination to get rid of Russian fossil fuels rapidly. EU countries have approved an embargo on coal imports from Russia, but member countries have yet to find a deal on sanctions on Russia’s oil and gas.

Attendees in Davos this week will discuss several other high-priority issues, like the Russia-Ukraine war, the threat of rising hunger worldwide, inequality and persistent health crises.

That includes Turkey’s pushback to Finland and Sweden applying for NATO membership. Finnish Foreign Minister Pekka Haavisto said at Davos that a delegation from his country and Sweden will travel to the Turkish capital Wednesday for talks.

Both Haavisto and NATO Secretary-General Jens Stoltenberg said in separate comments at the gathering that they believe they can overcome Turkey’s concerns about what it sees as Finland’s and Sweden’s support for groups it considers terrorists.

“We have to do what we always do in NATO, and that is to sit down and address concerns when allies express concerns,” Stoltenberg said.

But even in discussions of those issues, climate change was often ever present, as was the tension over what role oil and gas companies may play in a transition to green energy.

On Monday and again on Tuesday, the head of the International Energy Agency, Fatih Birol, said the urgent energy needs of the moment should not turn into an excuse to make long-term investments in fossil fuel exploration and extraction, which has spiked in recent months.

Instead, Birol argued the emphasis needed to be a fast shift to renewable energies, an increase in nuclear where possible, stopping leaks of methane, one of the most powerful greenhouse gases, and lowering personal consumption, like turning down the thermostat a few degrees.

“Some people may use the invasion of Ukraine as an excuse for fossil fuel investments. That will forever close the door to reach our climate targets” to reduce emissions that are heating up the planet, he said.

Vicki Hollub, CEO of Occidental Petroleum a major oil company, countered that oil and gas industries had a central role to play in the transition to renewable energy.

Instead of talk about moving away from fossil fuels, Hollub said the focus should be on making fossil fuels cleaner by reducing emissions. She said Occidental had invested heavily in wind and solar energy and planned to build the largest direct air capture facility in the world in the Permian Basin. Direct air capture is a process that pulls carbon dioxide out of the air and buries it deep in the ground.

“The U.S. can provide ample resources to the rest of the world. However, it’s becoming more and more difficult to do that because of the fact that we are getting a lot of headwinds,” she said on Monday. “One is the belief that we can end the use of oil and gas sooner rather than later.”

Joe Manchin, a U.S. senator from West Virginia who has opposed a major bill on climate change proposed by President Joe Biden, said Monday that fossil fuels were key to ensure energy security, and America had the resources to help ensure such security for the world.

“We can’t do it by abandoning the fossil fuel industry,” said Manchin, a Democrat, adding that no transition could take place until alternatives were fully in place.

Many energy experts argue that viable alternatives are already in place. For example, the cost of wind and solar have come down considerably in recent decades while efficiencies of both have dramatically increased. At the same time, other more nascent technologies have promise but need massive investment to develop.

Journalists Kelvin Chan and Jamey Keaten in Davos and Dana Beltaji in London and Samuel Petrequin in Brussels contributed to this report.