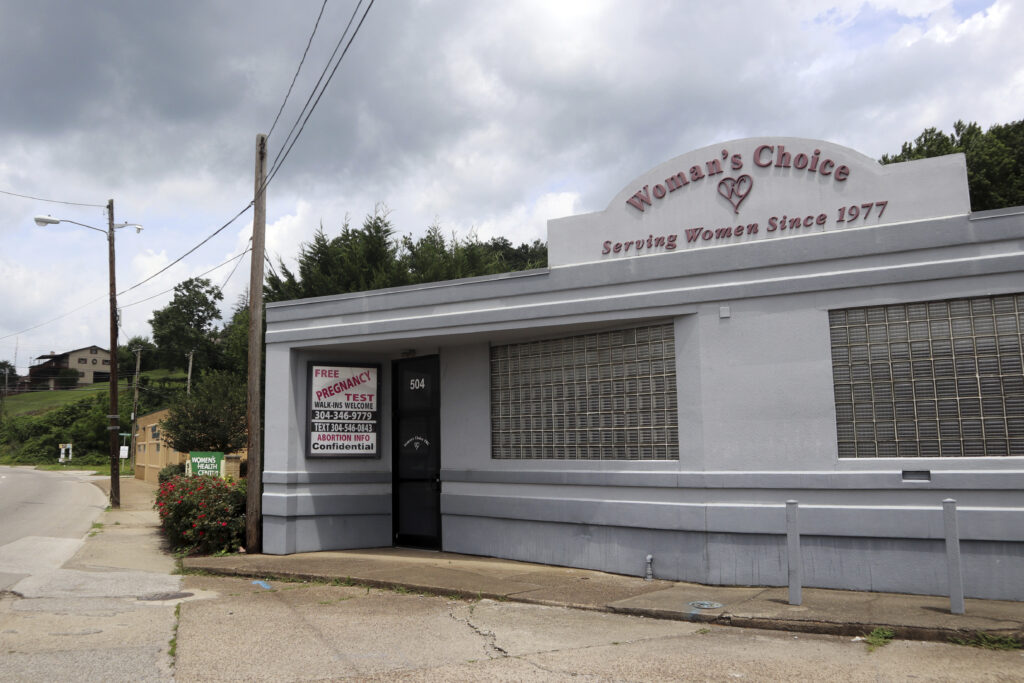 With red states banning abortion now that Roe v. Wade has been reversed, the role that crisis pregnancy centers play in helping women deal with unwanted babies is fast expanding. Although they are not strictly regulated like abortion clinics, they often have nurses on staff. The Associated Press has the story:

CHARLESTON, W.Va. (AP) — “Woman’s Choice,” the sign proclaims in bold pink letters. But despite promising abortion information and free pregnancy testing, the facility in Charleston, West Virginia, is designed to steer women facing an unwanted pregnancy away from choosing an abortion.

That will become much easier now that the U.S. Supreme Court has ruled that states like West Virginia can make abortion illegal.

It’s one of hundreds of so-called crisis pregnancy centers nationwide whose aim is to discourage women from seeking abortions. The facilities, which have been accused repeatedly of deceiving women about their true purpose, are expected to wield even more influence in states where the dwindling number of clinics are now canceling abortion appointments.

Often religiously affiliated, the anti-abortion centers are not licensed medical facilities and do not provide medical services such as pre- or post-natal care or other health care for uninsured women, unlike clinics that offer abortions — which are subject to strict government regulations and patient privacy laws. They do sometimes have nurses on staff or as volunteers.

“Basically, these centers are looking around and saying, ‘Our services are going to be needed now more than ever because there’s going to be so many pregnant people who need support during their pregnancy — particularly unintended pregnancies,’” said Charleston, a University of Georgia public health professor who has helped map center locations nationwide.

The Charleston anti-abortion center, which calls itself the Woman’s Choice Pregnancy Resource Center, has been located next to the abortion clinic for years. The people who run it say their work won’t change. They will continue to offer parenting and health classes, counseling for “women who regret a past decision to abort and wish to find comfort from guilt and sadness” and provide “facts about abortion risks — both physical and psychological,” they said in an email to The Associated Press.

The board also said staff must complete training emphasizing the importance of clients’ “right to be respected regardless of their decision.”

At the clinic next door, called the Women’s Health Center of West Virginia, executive director Katie Quinonez has her doubts about such statements. She has repeatedly seen patients seeking to end their pregnancies lured into the anti-abortion center and bombarded with warnings about abortion risks. Some who found their way to her office have shared pamphlets declaring that “abortion causes new problems that can haunt a woman for the rest of her life.”

One titled “Abortion — Living Without Regret” shows a woman crying on the cover and lists “abortion risks,” including “suicidal feelings,” “death” and “cervical incompetence.”

Quinonez said she worries about the dozens of patients whose abortion appointments were cancelled after the Supreme Court decision came down.

“I’m incredibly concerned,” she said. “It’s possible that they could think maybe there is another provider and state that’s doing abortions. ‘How about I call ‘A Woman’s Choice,’ located in Charleston?’ and then they make an appointment and go there because they’ve been lied to by a fake clinic that says ‘Yes, we can provide you with care.'”

While the anti-abortion centers are mostly mum about their plans now that Roe v. Wade has been overturned, experts say they’re likely to redouble efforts to persuade women not to end their pregnancies. The logistics work in their favor, since many women won’t have the legal option of abortion without leaving their state.

The centers have been expanding in every state with support from wealthy conservative donors, powerful state lawmakers and religious institutions. They’ve also received tens of millions of tax dollars funneled to them by conservative state leaders.

Left-leaning states have shown more willingness to regulate how the centers advertise their services. Last year Connecticut banned them from using “deceptive advertising” about the services they provide.

Connecticut had 18 health clinics that provided abortions as of 2018; there are also around 20 pregnancy crisis centers.

“As we head into this new world and into this next phase, I think it’s more important than ever for women to be able to access medically accurate information,” said Democratic Rep. Jillian Gilchrest, who sponsored the Connecticut legislation.

“The last thing we want is for women to be at what they believe to be a health clinic only to receive misinformation about their options.”

Nationally, crisis pregnancy centers outnumber abortion clinics more than 3 to 1, but in Republican-led states the numbers can be far higher, according to a 2021 report from The Alliance: State Advocates for Women’s Rights and Gender Equality. Some 2,500 centers are located across the country, while there are fewer than 800 abortion clinics.

In Missouri, which has just one abortion clinic, Swartzendruber and her colleagues identified nearly 70 anti-abortion centers in 2021. The situation is similar in North Dakota, where at least seven centers operated last year and the state’s lone abortion clinic is relocating now that Roe v. Wade was overturned.

In Mississippi, there are 30 centers, while the Jackson Women’s Health Organization — a plaintiff in the legal battle that came before the Supreme Court — was the lone provider offering abortion services.

Those three states are among 13 with so-called trigger laws that banned most abortions after Roe was overturned. West Virginia doesn’t have a trigger law, but does have an old statute on the books that had been shelved while Roe was in place.

“I see states with trigger laws working to continue to fund or increase funding to crisis pregnancy centers and trying to pass new legislation that would make the centers even more prominent,” Swartzendruber said.

“I believe that we have an opportunity like never before as the church to really rush in and to make a huge difference,” said Dean Nelson, vice president of government relations for Human Coalition, a national anti-abortion group that frequently directs pregnant women seeking information online to the centers and operates a handful of its own.

Some centers offer financial counseling, free diapers and food pantries for mothers after they’ve given birth. By expanding and strengthening the network of centers, anti-abortion advocates hope women will see they have resources and options.

That concerns reproductive rights advocates, who worry that without licensed abortion providers, women who become unexpectedly pregnant and desperate for help will wind up in places intent on deceiving them. Earlier this year, the Center for Countering Digital Hate, an internet watchdog group, released a report that found 1 in 10 Google searches for abortion services in states with trigger laws led people to the centers.

Amanda Furdge says that happened to her while searching for information about Mississippi’s only abortion clinic in 2014. Instead, she found a listing for what turned out to be a crisis pregnancy center in Jackson.

“I went for an appointment, and they kept me there all day, traumatized me. They gave me a pregnancy test and they told me, ‘We are not going to be able to recommend any abortion services for you,’” she said. “I was clear: ‘I don’t want to carry this pregnancy. I want to terminate it.’”

By the time she found the abortion clinic, she said she decided on her own she was too far along to have the procedure. She is now happily raising her 7-year-old son.

In West Virginia, the Charleston abortion clinic has rows of hedges blocking view of the building next door to reduce confusion. In front a sign reads “WARNING: The building behind this sign is an ANTI-CHOICE, ANTI-BIRTH CONTROL Crisis Pregnancy Center. It is not affiliated with the Women’s Health Center.”

“You shouldn’t be able to pose as a medical facility and just straight up lie to patients,” director Quinonez said.