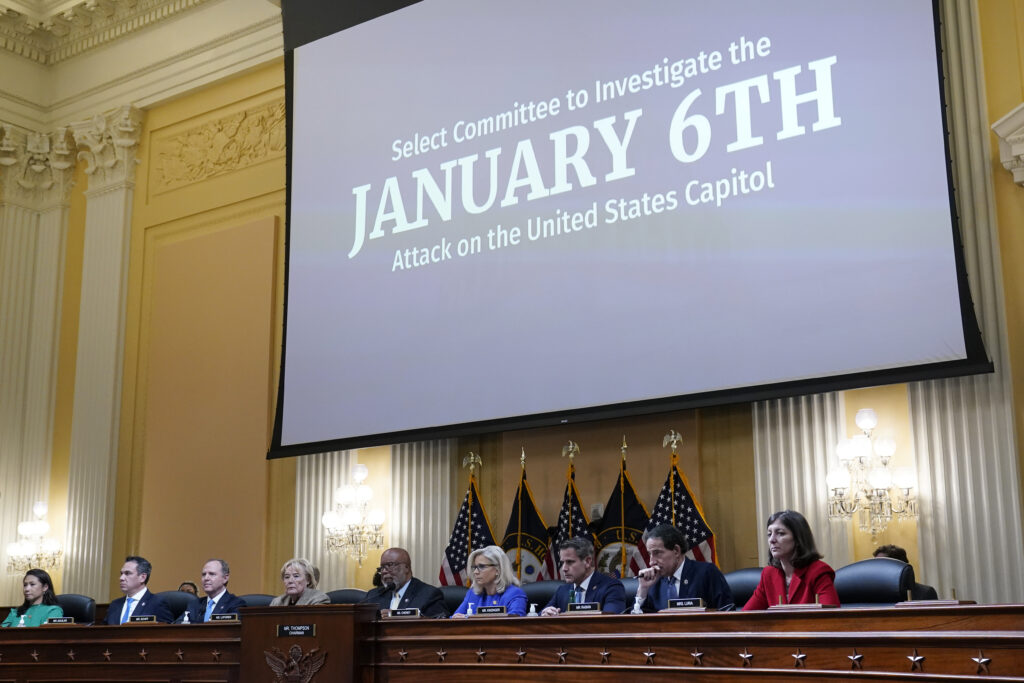 The much awaited launch of the Democrats’ public congressional hearings regarding the protest at the U.S. Capitol on Jan. 6, 2021, took place Thursday evening with few sparks. The members of Congress participating focused on trying to show that former President Donald Trump questioned the results of the 2020 presidential election. The Associated Press has the story:

Not very many sparks at Democrats’ Jan. 6 public hearings

WASHINGTON (AP) — Donald Trump was told the same thing over and over, by his campaign team, the data crunchers, and a steady stream of lawyers, investigators and inner-circle allies: There was no voting fraud that could have tipped the 2020 presidential election.

But in the eight weeks after losing to Joe Biden, the defeated Trump publicly, privately and relentlessly pushed his false claims of a rigged 2020 election and intensified an extraordinary scheme to overturn Biden’s victory. When all else failed in his effort to stay in power, Trump beckoned thousands of his supporters to Washington on Jan. 6, 2021, where extremists groups led the deadly Capitol siege.

The scale and virulence of that scheme began to take shape at the opening House hearing investigating 1/6. When the panel resumes Monday, it will delve into its findings that Trump and his advisers knew early on that he had in fact lost the election but engaged in a “massive effort” to spread false information to convince the public otherwise.

Biden spoke of the importance of the committee’s investigation in remarks Friday in Los Angeles. “The insurrection on Jan. 6 was one of the darkest chapters in our nation’s history,” the president said, “a brutal assault on our democracy.”

Americans, he said, must “understand what truly happened and to understand that the same forces that led to Jan. 6 remain at work today.”

The House panel investigating the 1/6 attack on the Capitol is prepared next week to reveal more details and testimony about its assessment that Trump was made well aware of his election loss. With testimony from some 1,000 interviews and 140,000 documents over the year-long probe, it will lay out how Trump was told repeatedly that there were no hidden ballots, rigged voting machines or support for his other outlandish claims. Nevertheless Trump refused to accept defeat and his desperate attempt to cling to the presidency resulted in the most violent domestic attack on the Capitol in history.

“Over multiple months, Donald Trump oversaw and coordinated a sophisticated seven-part plan to overturn the presidential election and prevent the transfer of presidential power,” Rep. Liz Cheney, R-Wyo., told the hearing Thursday night. “Trump’s intention was to remain president of the United States,” she said.

On Wednesday, the panel will hear testimony from the highest levels of the Trump-era Department of Justice — Acting Attorney General Jeffrey Rosen, his top deputy Richard Donoghue and Steven Engel, the former head of the department’s Office of Legal Counsel — according to a person familiar with the situation and granted anonymity to discuss their appearances.

The testimony from the three former Justice Department officials is expected to center on a chaotic stretch in the final weeks of the administration when Trump openly weighed the idea of replacing Rosen with a lower-ranking official, Jeffrey Clark, who was seen as more willing to champion in court the president’s false claims of voter fraud.

The situation came to a head in an hours-long meeting at the White House on Jan. 3, 2021, attended by Rosen, Donoghue, Engel and Clark, when top Justice Department officials and White House lawyers told Trump they would resign if he went ahead with his plan to replace Rosen. The president ultimately let Rosen finish out the administration as acting attorney general.

Thursday will turn to Trump’s remarkable efforts to press Vice President Mike Pence to refuse to count electoral votes on Jan. 6, a scheme proposed at the White House by an outside lawyer, John Eastman. During the insurrection, rioters prowled the halls of the Capitol shouting “hang Mike Pence” when the vice president refused Trump’s plan to overturn the 2020 election.

“I’d like to see the truth come out,” said Ken Sicknick, whose brother, Capitol Police Officer Brian Sicknick, died after suffering a stroke defending the Capitol, said Friday on CNN.

He said while the family received countless condolences after his brother died, including from the vice president, “not one tweet, not one note, not one card, nothing” from Trump. “Because he knows he’s the cause of the whole thing.”

The hearings may not change Americans’ views on the Capitol attack, but the panel’s investigation is intended to stand as its public record and could result in referrals for prosecution. With Trump considering another White House run, the committee’s final report aims to account for the most violent attack on the Capitol since 1814.

Early Friday, Trump responded on his social media site, decrying the “WITCH HUNT!” even as he fully acknowledged he refused to accept defeat.

“Many people spoke to me about the Election results, both pro and con, but I never wavered one bit,” he said, pushing his false claim of a stolen election.

Trump declared that Jan. 6 “represented the greatest movement in the history of our country.”

The start of the monthlong hearings opened Thursday in prime-time with the panel laying the blame for the 1/6 insurrection squarely on Trump, saying the assault was not spontaneous but an “attempted coup” and a direct result of the defeated president’s effort to overturn the 2020 election.

With a never-before-seen 12-minute video of extremist groups leading the deadly siege and startling testimony from Trump’s most inner circle, the committee provided new detail of an imperiled democracy.

“Jan. 6 was the culmination of an attempted coup,” said Rep. Bennie Thompson, D-Miss., chairman of the panel, during the hearing, timed for prime time to reach as many Americans as possible. “The violence was no accident.”

In a previously unseen video clip, the panel played a remark from former Attorney General Bill Barr, who testified that he told Trump the claims of a rigged election were “bull——.”

In another clip, the former president’s daughter, Ivanka Trump, testified to the committee that she respected Barr’s view that there was no election fraud. “I accepted what he said.”

Others showed leaders of the extremist Oath Keepers and Proud Boys preparing to storm the Capitol to stand up for Trump. One rioter after another told the committee they came to the Capitol because Trump asked them to.

In wrenching testimony U.S. Capitol Police officer Caroline Edwards told the panel that she slipped in other people’s blood as rioters pushed past her into the Capitol. She suffered brain injuries in the melee.

“It was carnage. It was chaos,” she said.

The riot left more than 100 police officers injured, many beaten and bloodied, as the crowd of pro-Trump rioters, some armed with pipes, bats and bear spray, charged into the Capitol. At least nine people who were there died during and after the rioting, including a woman who was shot and killed by police.

Court documents show that members of the Proud Boys and Oath Keepers were discussing as early as November a need to fight to keep Trump in office. Leaders both groups and some members have since been indicted on rare sedition charges over the military-style attack.

The Justice Department has arrested and charged more than 800 people for the violence that day, the biggest dragnet in its history.

By LISA MASCARO and ERIC TUCKER