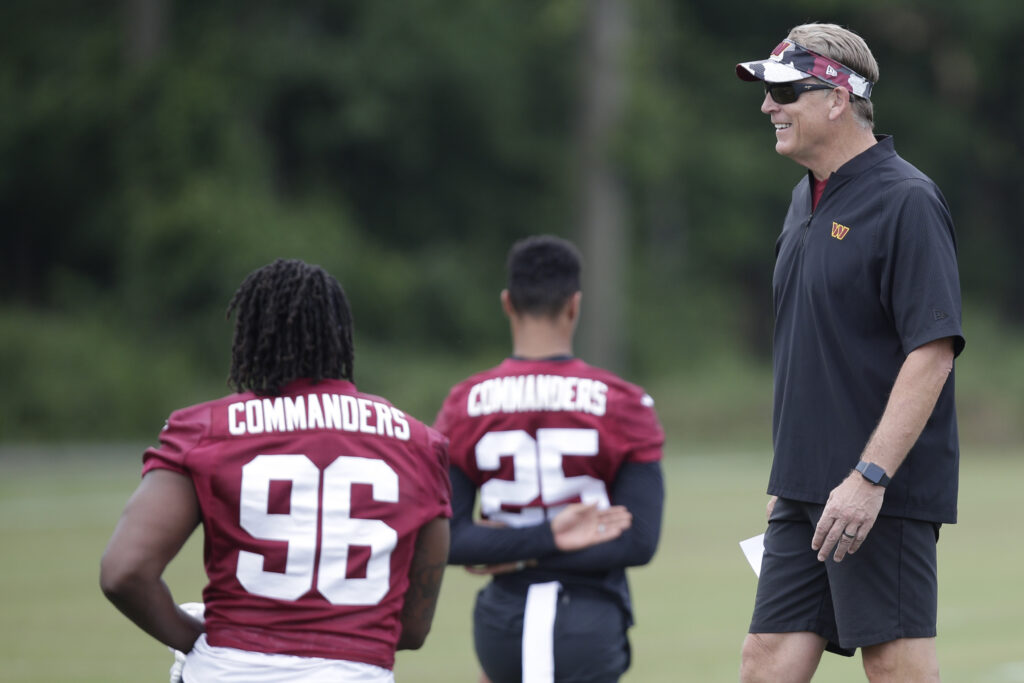 Washington Commanders Assistant Coach Jack Del Rio is under fire by the left for stating that the Jan. 6 protests at the U.S. Capitol were just a “dust-up,” whereas the violent protests after George Floyd’s death were far more serious. He’s since apologized, but Democrats running Virginia are threatening to punish the team. The Associated Press has the story:

NFL’s Washington Commanders in the middle of a political controversy

ASHBURN, Va. (AP) — The NFL’s Washington Commanders once again find themselves at the center of an off-the-field issue that has nothing to do with football, dealing another blow to their rapidly sagging reputation as one of the most dysfunctional franchises in professional sports.

The fallout from the latest misstep requiring an explanation or apology — assistant coach Jack Del Rio comparing the protests in the wake of the police killing of George Floyd to the Jan. 6 insurrection at the U.S. Capitol — could have far-reaching consequences beyond the locker room.

It immediately scuttled the team’s best opportunity to reach a deal to build a new stadium, which was the most important long-term project facing owner Dan Snyder amid a lengthy drought without a playoff victory and a dearth of fan enthusiasm. Multiple Virginia lawmakers pointed to Del Rio’s comments as another reason not to vote on legislation luring the Commanders to the state, and by Thursday the bill already on its last legs was pushed off the table for the rest of the year.

In a brief interview with The Associated Press, Democratic Virginia Senate Majority Leader Dick Saslaw cited various investigations and “other issues to be answered.”

The list of embarrassing and concerning issues facing the once-storied franchise continues to grow.

The Commanders, who rebranded after dropping their longtime name in 2020 amid the national reckoning over racism in the U.S. and played the last two seasons as the Washington Football Team, have been the subject of investigations into workplace culture since several employees detailed examples of sexual harassment.

Attorney Beth Wilkinson’s investigation launched first by the team and taken over by the NFL unearthed a toxic workplace culture and prompted a $10 million fine. When the league did not release a written report of the investigation last summer, Congress launched its own review of the sexual harassment allegations, which branched out into potential financial improprieties based on the testimony of a former employee.

While the Federal Trade Commission was informed of the possibility of financial laws being broken — which the team strongly denies — and Virginia and the District of Columbia officials also began looking into the matter, Congress turned its attention back to workplace culture. Just last week, the U.S. House Committee on Oversight and Reform invited Snyder and NFL Commissioner Roger Goodell to appear at a hearing June 22.

A spokeswoman said the committee has been in communication with the team and league about the request, which has now been pushed to the backburner by Del Rio’s comments made this week on the verge of public hearings opening into the riot at the U.S. Capitol on Jan. 6, 2021.

“People’s livelihoods are being destroyed, businesses are being burned down, no problem,” Del Rio said Wednesday when asked about a social media post he made comparing the summer of 2020 protests to the insurrection. “And then we have a dust-up at the Capitol, nothing burned down, and we’re going to make that a major deal. I just think it’s kind of two standards.”

He apologized hours later in a Twitter post, saying it was “irresponsible and negligent” to call Jan. 6 a “dust-up.” Del Rio added he stands by comments “condemning violence in communities across the country.”

The president of the NAACP on Thursday called for Del Rio to be terminated, saying the comments could not have been more offensive and ignorant.

“Downplaying the insurrection by comparing it to nationwide protests, which were in response to a public lynching, is twisted,” Derrick Johnson said in a statement. “You can’t coach a majority Black team while turning your back on the Black community.”

There is no indication Del Rio’s job is in danger as a result of his comments.

Coach Ron Rivera brushed off any notion of Del Rio’s opinions becoming an issue around the Commanders, whose roster is made up of a majority of Black players. Del Rio’s comments have not led to public outrage by Commanders players or around the league.

NFL spokesman Brian McCarthy said the league has no comment on Del Rio when contacted by The Associated Press on Thursday.

Jonathan Allen, a team leader who is Black, told NBC Sports Washington: “I don’t care about his opinion. As long as he shows up every day and he works hard, that’s what I want from my defensive coordinator.”

The potential impact of Del Rio’s remarks on a stadium that wouldn’t open until he, Rivera and almost every current player is no longer with the team may extend beyond Virginia. It already appeared unlikely for the team to return to its old home at the site of RFK Stadium in the District of Columbia, and several city councilmembers on Thursday made it “unequivocally” clear they won’t support using that land for a new Commanders facility.

D.C. City Council Chairman Phil Mendelson, who was not one of the seven members to send a letter to Congresswoman Eleanor Holmes Norton about RFK, said Del Rio’s comment was inappropriate and evidence of revisionist history about the events of Jan. 6.

“It’s just part of many controversies,” Mendelson told The AP. He added his biggest issue with the team is the lack of a written report from the workplace misconduct investigation.

That remains an open issue, with no indication by the league that a report will ever be released. But Del Rio’s comments are indicative of Washington’s team culture, according to a lawyer who represents more than 40 former employees.

“Jack Del Rio’s ignorant remarks, and the failure of the team leadership to immediately make clear that his comments were inappropriate and offensive, is only further evidence of the failure of this organization to evolve or grow,” attorney Lisa Banks said. “It remains a dysfunctional, toxic environment with no conscience or accountability, despite all claims to the contrary.”