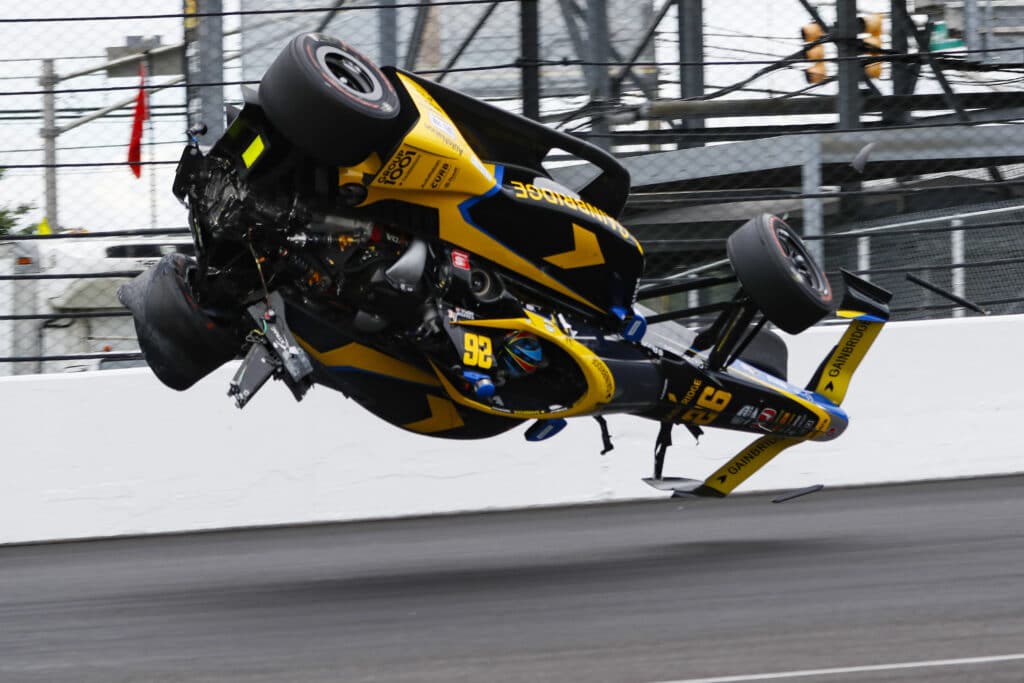 Colton Herta rolled his car while practicing before the Indianapolis 500, but walked away unscathed. His Andretti Autosport was totaled, so he will be driving a backup in the race. The Associated Press has the story:

INDIANAPOLIS (AP) — Colton Herta rolled his Indianapolis 500 car end-over-end during Friday’s final practice. The star driver for Andretti Autosport was uninjured in the most significant crash in the build up to the “Greatest Spectacle in Racing.”

“I think I was going a little too fast for that corner,” Herta said.

The crash with 25 minutes remaining on “Carb Day” destroyed the Andretti Honda and he will need a backup for Sunday’s race. Herta had also blown an engine in qualifying and will start 25th in whatever car Andretti can get ready for race day.

“A little sad for that race car,” Herta said when asked how he felt after exiting the infield care center.

The 22-year-old Californian was speaking on his team radio as his car was still rolling. When it came to a stop, his father, Bryan, radioed for Herta to stay put and strapped in until emergency crews could free him from the car.

His father is his race strategist and immediately went to the Andretti garage to oversee preparations on the backup car. Herta does not have to drop to the back of the field.

“Thankful for a lot of things,” Herta said. “I guess the aeroscreen is part of that. More so the safety crew and I guess just the durability of the side pods on the side structure of the cars. That was a big hit from the side. Yeah, the safety crews were there very fast flipping me back over.”

Earlier in practice, David Malukas crashed following contact with Santino Ferrucci. Malukus, at 20 years old, is the youngest driver in the field; Ferrucci was penalized for avoidable contact.

“Probably one of the biggest hits I felt,” Malukas said. “I came out with just a small bruise.”

Herta scored his first win of the IndyCar season earlier this month with an entertaining drive through the rain on the road course inside Indianapolis Motor Speedway. Last year, Herta qualified second, started on the front row and led 13 laps before strategy backfired and he faded to a disappointing 16th-place finish.

Herta said Friday’s practice was about “getting the last little bits balanced right.”

That was, until the crash.

“I’m not too worried for the race,” Herta said. “I think the car will be fine.”

Tony Kanaan and Marcus Ericsson led practice for Chip Ganassi Racing. Scott Dixon, the pole sitter, was third-fastest and seven-time NASCAR champion Jimmie Johnson was seventh as Ganassi had four of his cars in the top seven. Alex Palou, the reigning IndyCar champion, was 14th and slowest of the Ganassi group.

“We had a good car all month. We didn’t go out and, let’s be fastest on Carb Day,” said Kanaan, the 2013 Indy 500 champion. “It doesn’t count, doesn’t mean anything. It’s a consequence of a good car that we had all month. You look at teammates, they’re all there.”

Johnson has been everywhere this month, from the track to the late-night talk-show circuit as he preps for his first Indy 500. Johnson was at Indy last season as part of NBC Sports’ coverage.

“I want to experience it all,” Johnson said. “It’s been great.”