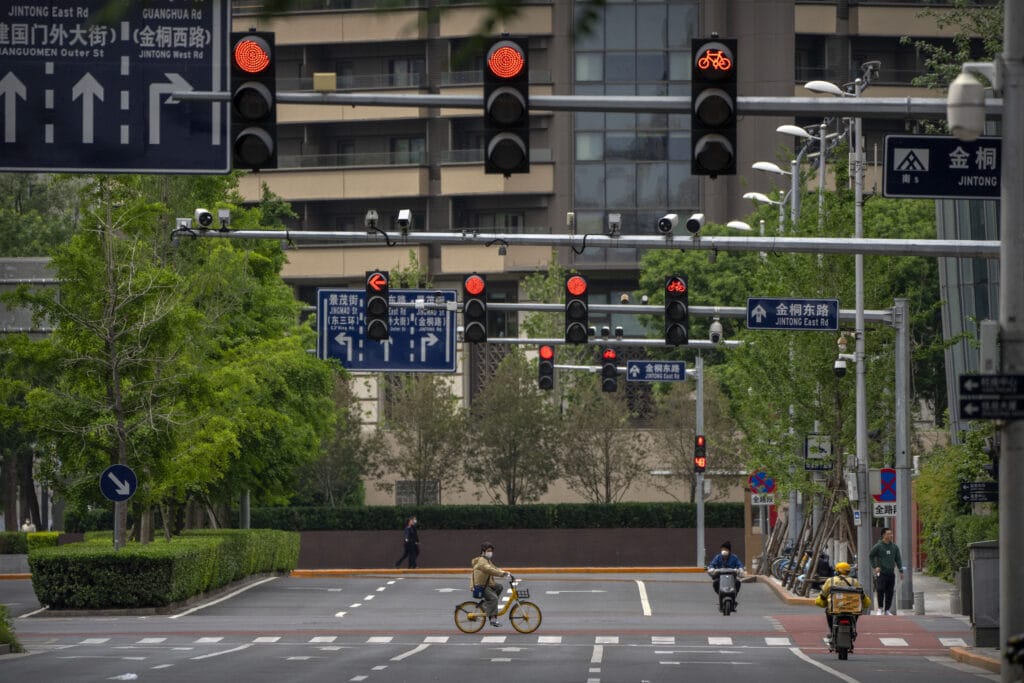 China refuses to end the COVID-19 lockdown, even though the impact has been horrendous on both individuals and businesses. The Communist Party’s “zero-COVID” goal of preventing all infections ignores advice from the World Health Organization that it’s not attainable. The Associated Press has the story:

BEIJING (AP) — China’s leaders are struggling to reverse an economic slump without giving up anti-virus tactics that shut down Shanghai and other cities, adding to challenges for President Xi Jinping as he tries to extend his time in power.

The ruling Communist Party has declared its “zero-COVID” goal of preventing all infections takes priority over the economy. It is a decision with global implications and comes despite warnings by experts including the head of the World Health Organization that the goal might be unattainable.

“We don’t think it is sustainable,” the WHO director-general, Tedros Adhanom Ghebreyesus, said Tuesday.

China kept infection numbers low until early this year with a strategy that shut down cities, but entailed soaring costs. Beijing has switched to “dynamic clearing” that seals buildings or neighborhoods if infections are found. But with thousands of new cases of the highly infectious omicron variant reported every day, that keeps most of Shanghai’s 25 million people at home. Big parts of Beijing and other cities with tens of millions of people also are closed.

That is disrupting manufacturing and hampering the global flow of goods from smartphones to iron ore, increasing inflation risks in the United States and Europe. Consumer spending is weak, chilling Chinese demand for imports.

The ruling party is promising tax refunds and other aid to struggling entrepreneurs that Beijing counts on to create jobs and wealth. Premier Li Keqiang, the No. 2 leader, warned last week the employment situation is “complex and grim.”

On Wednesday, Li called during a Cabinet meeting for officials to focus spending and credit policies on preventing job losses, state TV and the official Xinhua News Agency reported. They gave no details of possible new initiatives.

Despite promises of aid, forecasters say economic growth in the current quarter will fall as low as 1.8% over a year ago from an anemic 4.8% in the last quarter. Growth for the full year is forecast as low as 3.8%, below the ruling party’s official 5.5% target and less than half of 2021′s 8.1% expansion.

“The Chinese government is willing to make some sacrifices on the economy in the short term to trade for long-term growth,” said Nomura economist Ting Lu. However, he said, “achieving ‘zero COVID’ is quite challenging, because omicron is more infectious.”

China’s strategy is “not to pursue zero infection but to control the epidemic situation in the shortest time at the lowest social cost,” said Zhao Lijian. “The vast majority of people in most areas in China live and work normally.”

Complaints about food shortages and other hardships and videos posted online showing people in Shanghai and other areas arguing with police have been deleted by censors.

Public frustration and economic losses add to complications for Xi ahead of a ruling party congress in October or November at which he is expected to try to break with tradition and award himself a third five-year term as leader.

Xi, the most dominant Chinese leader since at least the 1980s, still is expected to secure another term. But experts say rivals might gain leverage to trim his powers. Supporters of market-style economic reforms also want to roll back policies that favor state industry and tighter control of the private sector, China’s economic engine.

Wrangling over the cost of anti-virus strategies gives “an opening to his factional opponents” with “deeper ties to business sectors,” said Diana Choyleva of Enodo Economics in a report. “They are more attuned than Xi and his supporters to the impact of zero-Covid on the economy and on middle-class citizens.”

In a sign private industry is weakening, 4.4 million companies closed last year while only 1.3 million new enterprises opened, down from 13.8 million in 2019, according to Choyleva.

COVID restrictions have closed factories or suspended access to manufacturing centers for autos, electronics and other industries including Changchun and Jilin in the northeast and Guangzhou and Shenzhen in the south.

In the central city of Zhenzhou, the Xiao Nan Guo restaurant closed May 4 but still is paying its workforce of 100, according to an employee, Wang Huiqin. She said business was down about 40% before restaurants in the city of 13 million people were told to stop providing dine-in service.

“If the situation lasts for a few weeks, the company can handle it,” said Wang. “If it lasts longer, there will be problems because the costs will be too much.”

In Shanghai, most businesses have been closed since late March at an estimated cost of tens of billions of dollars a month in lost activity.

Cargo volume at the Port of Shanghai, the world’s busiest, is down 30%. Economists say foreign customers are looking for non-Chinese suppliers that might be more likely to deliver but charge more.

“This will add further to stagflation risk this year” in Western economies, said Tommy Wu of Oxford Economics, referring to a scenario of rising prices and falling economic activity.

China was the only major economy to grow in 2020 after Beijing shut factories, shops and offices nationwide to fight the virus. The ruling party declared victory after a few months and reopened the economy.

Last year, Xi’s government shifted back to long-range plans that include trying to reduce excessive real estate debt. That triggered a plunge in construction and housing sales in mid-2021.

In a sign of the intensity of economic pain, Beijing faces appeals from foreign companies that usually avoid questioning official policy for fear of retaliation.

The American Chamber of Commerce in China says its members want a “more optimal balance” between disease prevention and business.

More than half of 121 companies that responded to an April 29-May 5 survey have delayed or reduced investment, according to the chamber.

“Members don’t see any light at the end of the tunnel,” said the chamber chairman, Colm Rafferty, in a statement.

At a May 5 meeting, party leaders appeared to reject such appeals and the “living with the virus” stance adopted by other governments.

Relaxing virus-control measures will lead to “large-scale infections, serious illness and deaths” and “seriously affect” the economy, they said in a statement. To shut down debate, it said “all sectors of society” should “unify their thoughts and actions” with party leaders.

Instead of giving up their growth target to pursue “zero-COVID,” party leaders “want both,” said Larry Hu and Xinyu Ji of Macquarie Group in a report.

“Zero-COVID at the cost of surging unemployment is a hard sell for China’s top leaders, especially in such a year of significant political importance,” they wrote.