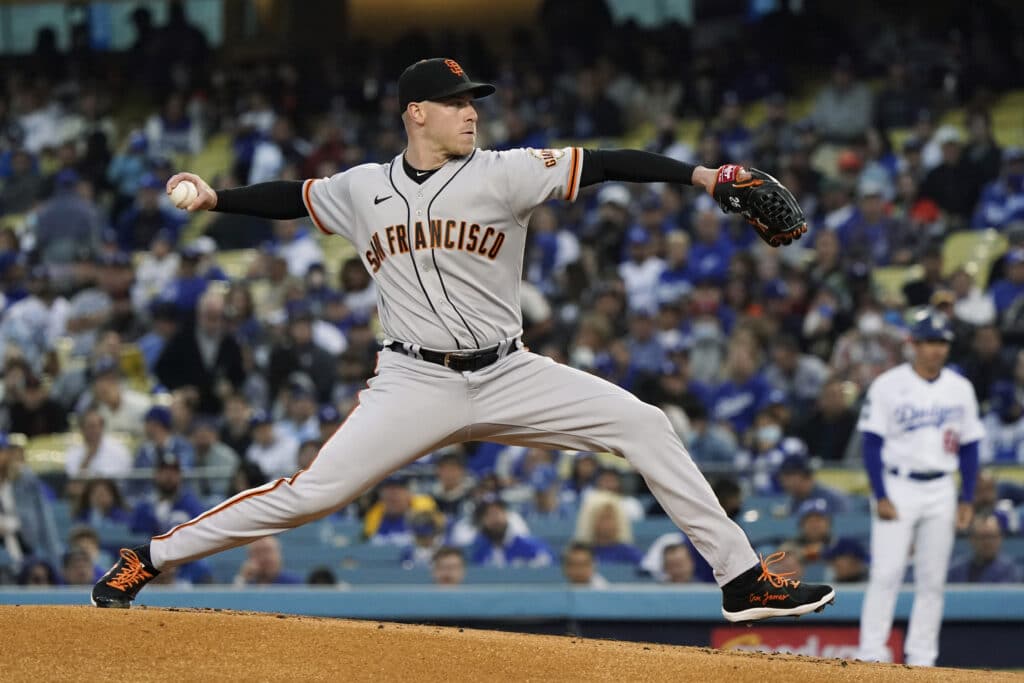 The Los Angeles Dodgers forced a decisive Game 5 in their NL Division Series by trouncing the San Francisco Giants 7-2. It was their second elimination game in less than a week. The Associated Press has the story:

It was their 52,935 fans who went bonkers, celebrating a 7-2 victory over the San Francisco Giants on Tuesday night to force a decisive Game 5 in their NL Division Series.

“Everybody was kind of chill, relaxed and wanted to play,” Betts said. “It’s not like we’re all of a sudden going to start hitting it harder or throwing it further or throwing it faster or whatever. It’s the same game we have been playing. It’s just a win-or-go-home situation.”

Next, the 106-win Dodgers head back to San Francisco to play the 107-win Giants one more time Thursday night, with the winner advancing to face Atlanta in the NL Championship Series. The Braves eliminated Milwaukee earlier Tuesday.

“They know us, we know them really well,” Smith said. “It’s going to come down to who wants it a little more.”

San Francisco won the NL West by one game over the Dodgers in an historic race that went down to the final day of the regular season. Now, these storied rivals are set for a winner-take-all showdown.

“This is what baseball wants,” Dodgers manager Dave Roberts said. “We’re going to be the only show in town. If you have a pulse or you’re a sports fan, you better be watching Dodgers-Giants.”

The Dodgers managed just five hits during a 1-0 loss in Game 3 — the second time they were shut out in this series — to reach the brink of elimination. Los Angeles had that many by the second inning Tuesday and pounded out 12 in all to back a brief but effective outing from Buehler on three days’ rest.

“Tonight’s a great example of kind of 26 guys coming together and figuring out a way to survive,” Buehler said.

Buehler went to Roberts as early as the Dodgers’ 9-2 victory in Game 2 and said he wanted the ball in Game 4 to start on short rest for the first time in his career. The right-hander allowed one run and three hits in 4 1/3 innings. He struck out four and walked two on 71 pitches.

“I actually felt great,” Buehler said. “Probably the best I have in the second half of the year. We’ll see how I feel tomorrow, but for tonight I felt pretty good.”

After giving up a leadoff single to Evan Longoria and walking pinch-hitter Steven Duggar, Buehler exited to a standing ovation from blue towel-waving fans.

The Dodgers chased starter Anthony DeSclafani in the second. He gave up two runs and five hits and struck out two.

The Giants ran through six pitchers by the fifth, leaving them with just three relievers. By the seventh, only backup catcher Curt Casali was available off the bench and he pinch-hit in the eighth.

The Giants have been outscored 16-9 in the series. They had seven hits Tuesday.

“This time of year you’re going to face great pitching night-in and night-out,” All-Star catcher Buster Posey said. “You’re hoping that when you do get some traffic out there, you can get a big hit because sometimes those opportunities are limited. Hopefully that’s something we will be able to do on Thursday.”

The biting, steady wind that prevailed throughout Game 3 was gone, leaving just a slight breeze to ruffle the center-field flags.

Smith hit a two-run homer to center in the eighth, extending the lead to 7-2.

Betts homered in the fourth, and his bases-loaded sacrifice fly scored Cody Bellinger in the fifth for a 5-1 lead.

“I told him after the homer that’s the best swing he’s taken all year,” Roberts said.

The Giants’ runs came in the top of the fifth on Darin Ruf’s RBI groundout off winner Joe Kelly, and Kris Bryant’s RBI groundout in the eighth. Posey, a career .257 hitter in the postseason, went 0 for 4.

Buehler was safe at first leading off the fourth when his shot went off reliever Jarlin Garcia’s leg for an error. Betts followed with a two-run homer to the right-field pavilion, extending the lead to 4-0.

The Dodgers got on the board in the first with NL batting champion Trea Turner’s RBI double to right-center that rolled to the wall, scoring Corey Seager, who singled.

Chris Taylor’s sacrifice fly made it 2-0 in the second.

San Francisco had runners at the corners in the second on consecutive one-out singles by Bryant and LaMonte Wade Jr. But Buehler got out of the jam, retiring Longoria on a swinging strike and Mike Yastrzemski on a liner to second.

Last postseason, the Dodgers went 3-0 in elimination games, rallying from a 3-1 deficit to beat Atlanta in the NLCS.

Dodgers reliever Brusdar Graterol pitched the sixth, when six of his seven pitches clocked 101 mph or better. He retired three of four batters, with only Bryant reaching on an infield single to first. Graterol retired Posey, pinch-hitter Wilmer Flores and Longoria on groundouts.

The game was delayed briefly to start the eighth when a fan ended up on the warning track in the right-field corner. Multiple security guards pounced on the intruder, who was handcuffed and escorted off.

Giants: RHP Logan Webb starts Game 5 on Thursday. He dominated the Dodgers in the series opener, striking out 10 over 7 2/3 innings to beat Buehler 4-0.

Dodgers: LHP Julio Urías starts the winner-take-all game. The majors’ lone 20-game winner this season led MLB with an .870 winning percentage and then pitched Los Angeles to a 9-2 victory in Game 2.